A fateful process is set in motion when the individual is released to the freedom of his own impotence and left to justify his existence by his own efforts. The autonomous individual, striving to realize himself and prove his worth, has created all that is great in literature, art, music, science and technology. The autonomous individual, also, when he can neither realize himself nor justify his existence by his own efforts, is a breeding call of frustration, and the seed of the convulsions which shake our world to its foundations.

A mathematicians work is mostly a tangle of guesswork, analogy, wishful thinking and frustration, and proof, far from being the core of discovery, is more often than not a way of making sure that our minds are not playing tricks.

A teacher  is never a giver of "truth; he is a guide, a pointer to the truth that the student must discover for himself.  For example, a skillful teacher might spur his students growth by confronting him with certain frustrations. A good teacher is a catalyst.

And I believe there are many Species in Nature, which were never yet taken notice of by Man, and consequently of no use to him, which yet we are not to think were created in vain; but its likely  to partake of the overflowing Goodness of the Creator, and enjoy their own Beings. But though in this sense it be not true, that all things were made for Man; yet thus far it is, that all the Creatures in the World may be some way or other useful to us, at least to exercise our Wits and Understandings, in considering and contemplating of them, and so afford us Subject of Admiring and Glorifying their and our Maker. Seeing them, we do believe and assert that all things were in some sense made for us, we are thereby obliged to make use of them for those purposes for which they serve us, else we frustrate this End of their Creation.

As a child I read a lot, and I read everything. Id go to the library and then stay up all night reading. I used to read under the desk in school  I read all of the books on science in the library and was frustrated when there was nothing left to read.

In 'A Personal Profile of Karen K. Uhlenbeck', collected in Susan Ambrose et al., Journeys of Women in Science and Engineering, No Universal Constants (1999).

I would have picked up the artificial heart and thrown it on the floor and walked out and said he's dead if the press had not been there.
[Recalling moments of frustration caused by difficulties during the 7½-hour surgery on Barney Clark for the first human implant of an artificial heart.] 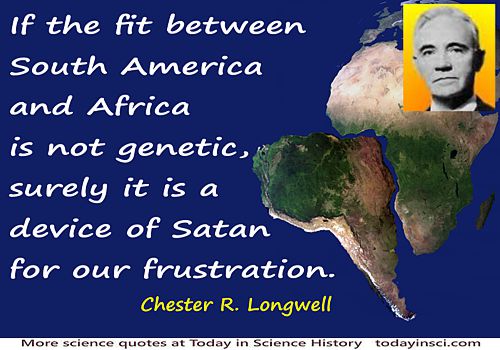 If the fit between South America and Africa is not genetic, surely it is a device of Satan for our frustration.

It is a temptation for philosophers that they should weave a fairy tale of the adjustment of factors; and then as an appendix introduce the notion of frustration, as a secondary aspect. I suggest to you that this is the criticism to be made on the monistic idealisms of the nineteenth century, and even of the great Spinoza. It is quite incredible that the Absolute, as conceived in monistic philosophy, should evolve confusion about its own details.

The social sciences were for all those who had not yet decided what to do with their lives, and for all those whose premature frustrations led them into the sterile alleys of confrontation.

To eliminate the discrepancy between men's plans and the results achieved, a new approach is necessary. Morphological thinking suggests that this new approach cannot be realized through increased teaching of specialized knowledge. This morphological analysis suggests that the essential fact has been overlooked that every human is potentially a genius. Education and dissemination of knowledge must assume a form which allows each student to absorb whatever develops his own genius, lest he become frustrated. The same outlook applies to the genius of the peoples as a whole.