Hamburger steak is carrion, and quite unfit for food except by a turkey buzzard, a hyena, or some other scavenger.

It is not surprising, in view of the polydynamic constitution of the genuinely mathematical mind, that many of the major heros of the science, men like Desargues and Pascal, Descartes and Leibnitz, Newton, Gauss and Bolzano, Helmholtz and Clifford, Riemann and Salmon and PlĂĽcker and PoincarĂ©, have attained to high distinction in other fields not only of science but of philosophy and letters too. And when we reflect that the very greatest mathematical achievements have been due, not alone to the peering, microscopic, histologic vision of men like Weierstrass, illuminating the hidden recesses, the minute and intimate structure of logical reality, but to the larger vision also of men like Klein who survey the kingdoms of geometry and analysis for the endless variety of things that flourish there, as the eye of Darwin ranged over the flora and fauna of the world, or as a commercial monarch contemplates its industry, or as a statesman beholds an empire; when we reflect not only that the Calculus of Probability is a creation of mathematics but that the master mathematician is constantly required to exercise judgmentâ€”judgment, that is, in matters not admitting of certaintyâ€”balancing probabilities not yet reduced nor even reducible perhaps to calculation; when we reflect that he is called upon to exercise a function analogous to that of the comparative anatomist like Cuvier, comparing theories and doctrines of every degree of similarity and dissimilarity of structure; when, finally, we reflect that he seldom deals with a single idea at a tune, but is for the most part engaged in wielding organized hosts of them, as a general wields at once the division of an army or as a great civil administrator directs from his central office diverse and scattered but related groups of interests and operations; then, I say, the current opinion that devotion to mathematics unfits the devotee for practical affairs should be known for false on a priori grounds. And one should be thus prepared to find that as a fact Gaspard Monge, creator of descriptive geometry, author of the classic Applications de lâ€™analyse Ă  la gĂ©omĂ©trie; Lazare Carnot, author of the celebrated works, GĂ©omĂ©trie de position, and RĂ©flections sur la MĂ©taphysique du Calcul infinitesimal; Fourier, immortal creator of the ThĂ©orie analytique de la chaleur; Arago, rightful inheritor of Mongeâ€™s chair of geometry; Poncelet, creator of pure projective geometry; one should not be surprised, I say, to find that these and other mathematicians in a land sagacious enough to invoke their aid, rendered, alike in peace and in war, eminent public service.

M.D.â€”Make Do.â€” Quaint idea! â€¦ Work for the handicapped â€¦ who is handicapped, your patients, or you? Both. Helping the survival of the unfit.â€¦ With more to come. What in the world was the solution. Where to find a formula for head and heart too?

Mark all Mathematical heads which be wholly and only bent on these sciences, how solitary they be themselves, how unfit to live with others, how unapt to serve the world. (c.1550)

Mr. Auld â€¦ forbade Mrs. Auld to instruct me further, telling her â€¦ â€śA [slave] should know nothing but to obey his masterâ€¦ If you teach that [slave] (speaking of myself) how to read, there would be no keeping him. It would forever unfit him to be a slave.â€ť

In autobiography, Narrative Of The Life Of Frederick Douglass (1851), 35. Often seen restated as â€śKnowledge makes a man unfit to be a slave.â€ť [Webmaster has substituted â€ś[slave]â€ť in the subject quotation above, where the original text had a word much spoken in that period, but is now regarded too offensive to use.]

No! What we need are not prohibitory marriage laws, but a reformed society, an educated public opinion which will teach individual duty in these matters. And it is to the women of the future that I look for the needed reformation. Educate and train women so that they are rendered independent of marriage as a means of gaining a home and a living, and you will bring about natural selection in marriage, which will operate most beneficially upon humanity. When all women are placed in a position that they are independent of marriage, I am inclined to think that large numbers will elect to remain unmarriedâ€”in some cases, for life, in others, until they encounter the man of their ideal. I want to see women the selective agents in marriage; as things are, they have practically little choice. The only basis for marriage should be a disinterested love. I believe that the unfit will be gradually eliminated from the race, and human progress secured, by giving to the pure instincts of women the selective power in marriage. You can never have that so long as women are driven to marry for a livelihood.

In 'Heredity and Pre-Natal Influences. An Interview With Dr. Alfred Russel Wallace', Humanitarian (1894), 4, 87.

The ill and unfit choice of words wonderfully obstructs the understanding.

From Novum Organum (1620), Book 1, Aphorisms 39, 41-44. Translated as The New Organon: Aphorisms Concerning the Interpretation of Nature and the Kingdom of Man), collected in James Spedding, Robert Ellis and Douglas Heath (eds.), The Works of Francis Bacon (1857), Vol. 4, 55.

The logic of the subject [algebra], which, both educationally and scientifically speaking, is the most important part of it, is wholly neglected. The whole training consists in example grinding. What should have been merely the help to attain the end has become the end itself. The result is that algebra, as we teach it, is neither an art nor a science, but an ill-digested farrago of rules, whose object is the solution of examination problems. â€¦ The result, so far as problems worked in examinations go, is, after all, very miserable, as the reiterated complaints of examiners show; the effect on the examinee is a well-known enervation of mind, an almost incurable superficiality, which might be called Problematic Paralysisâ€”a disease which unfits a man to follow an argument extending beyond the length of a printed octavo page. 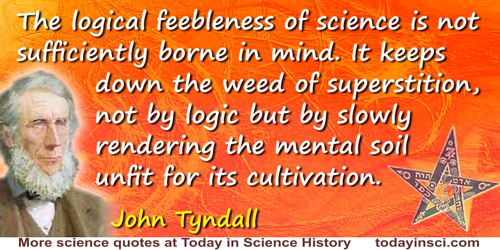 The way to eliminate the unfit is to keep them from being bornâ€¦ . We should not only check degenerationâ€”negativelyâ€”but further evolution, positively, by artificial insemination and work for the production of a nobler and nobler race of beings.

~~[Attributed, authorship undocumented]~~ Mathematical demonstrations are a logic of as much or more use, than that commonly learned at schools, serving to a just formation of the mind, enlarging its capacity, and strengthening it so as to render the same capable of exact reasoning, and discerning truth from falsehood in all occurrences, even in subjects not mathematical. For which reason it is said, the Egyptians, Persians, and Lacedaemonians seldom elected any new kings, but such as had some knowledge in the mathematics, imagining those, who had not, men of imperfect judgments, and unfit to rule and govern.

From an article which appeared as 'The Usefulness of Mathematics', Pennsylvania Gazette (30 Oct 1735), No. 360. Collected, despite being without clear evidence of Franklinâ€™s authorship, in The Works of Benjamin Franklin (1809), Vol. 4, 377. Evidence of actual authorship by Ben Franklin for the newspaper article has not been ascertained, and scholars doubt it. See Franklin documents at the website founders.archives.gov. The quote is included here to attach this caution.