Domesticated biotechnology, once it gets into the hands of housewives and children, will give us an explosion of diversity of new living creatures â€¦ New lineages will proliferate to replace those that monoculture farming and deforestation have destroyed. Designing genomes will be a personal thing, a new art form as creative as painting or sculpture. Few of the new creations will be masterpieces, but a great many will bring joy to their creators and variety to our fauna and flora.

I would request that my body in death be buried, not cremated so that the energy content contained within in gets returned to the earth, so that flora and fauna can dine upon it just as Iâ€™ve dined upon flora and fauna throughout my life.

It is not surprising, in view of the polydynamic constitution of the genuinely mathematical mind, that many of the major heros of the science, men like Desargues and Pascal, Descartes and Leibnitz, Newton, Gauss and Bolzano, Helmholtz and Clifford, Riemann and Salmon and PlĂĽcker and PoincarĂ©, have attained to high distinction in other fields not only of science but of philosophy and letters too. And when we reflect that the very greatest mathematical achievements have been due, not alone to the peering, microscopic, histologic vision of men like Weierstrass, illuminating the hidden recesses, the minute and intimate structure of logical reality, but to the larger vision also of men like Klein who survey the kingdoms of geometry and analysis for the endless variety of things that flourish there, as the eye of Darwin ranged over the flora and fauna of the world, or as a commercial monarch contemplates its industry, or as a statesman beholds an empire; when we reflect not only that the Calculus of Probability is a creation of mathematics but that the master mathematician is constantly required to exercise judgmentâ€”judgment, that is, in matters not admitting of certaintyâ€”balancing probabilities not yet reduced nor even reducible perhaps to calculation; when we reflect that he is called upon to exercise a function analogous to that of the comparative anatomist like Cuvier, comparing theories and doctrines of every degree of similarity and dissimilarity of structure; when, finally, we reflect that he seldom deals with a single idea at a tune, but is for the most part engaged in wielding organized hosts of them, as a general wields at once the division of an army or as a great civil administrator directs from his central office diverse and scattered but related groups of interests and operations; then, I say, the current opinion that devotion to mathematics unfits the devotee for practical affairs should be known for false on a priori grounds. And one should be thus prepared to find that as a fact Gaspard Monge, creator of descriptive geometry, author of the classic Applications de lâ€™analyse Ă  la gĂ©omĂ©trie; Lazare Carnot, author of the celebrated works, GĂ©omĂ©trie de position, and RĂ©flections sur la MĂ©taphysique du Calcul infinitesimal; Fourier, immortal creator of the ThĂ©orie analytique de la chaleur; Arago, rightful inheritor of Mongeâ€™s chair of geometry; Poncelet, creator of pure projective geometry; one should not be surprised, I say, to find that these and other mathematicians in a land sagacious enough to invoke their aid, rendered, alike in peace and in war, eminent public service.

Now it is a well-known principle of zoological evolution that an isolated region, if large and sufficiently varied in its topography, soil, climate and vegetation, will give rise to a diversified fauna according to the law of adaptive radiation from primitive and central types. Branches will spring off in all directions to take advantage of every possible opportunity of securing food. The modifications which animals undergo in this adaptive radiation are largely of mechanical nature, they are limited in number and kind by hereditary, stirp or germinal influences, and thus result in the independent evolution of similar types in widely-separated regions under the law of parallelism or homoplasy. This law causes the independent origin not only of similar genera but of similar families and even of our similar orders. Nature thus repeats herself upon a vast scale, but the similarity is never complete and exact.

'The Geological and Faunal Relations of Europe and America during the Tertiary Period and the Theory of the Successive Invasions of an African Fauna', Science (1900), 11, 563-64.

The gold rush in Madre de Dios, Peru, exceeds the combined effects of all other causes of forest loss in the region, including from logging, ranching and agriculture. This is really important because weâ€™re talking about a global biodiversity hotspot. The regionâ€™s incredible flora and fauna is being lost to gold fever.

As quoted by Rhett A. Butler in article 'Gold mining in the Amazon rainforest surges 400%' on monabay.com website (28 Oct 2013).

The law of conservation rigidly excludes both creation and annihilation. Waves may change to ripples, and ripples to waves,â€”magnitude may be substituted for number, and number for magnitude,â€”asteroids may aggregate to suns, suns may resolve themselves into florae and faunae, and florae and faunae melt in air,â€”the flux of power is eternally the same. It rolls in music through the ages, and all terrestrial energy,â€”the manifestations of life, as well as the display of phenomena, are but the modulations of its rhythm.

The process of natural selection has been summed up in the phrase â€śsurvival of the fittest.â€ť This, however, tells only part of the story. â€śSurvival of the existingâ€ť in many cases covers more of the truth. For in hosts of cases the survival of characters rests not on any special usefulness or fitness, but on the fact that individuals possessing these characters have inhabited or invaded a certain area. The principle of utility explains survivals among competing structures. It rarely accounts for qualities associated with geographic distribution.
The nature of animals which first colonize a district must determine what the future fauna will be. From their specific characters, which are neither useful nor harmful, will be derived for the most part the specific characters of their successors.
It is not essential to the meadow lark that he should have a black blotch on the breast or the outer tail-feather white. Yet all meadow larks have these characters just as all shore larks have the tiny plume behind the ear. Those characters of the parent stock, which may be harmful in the new relations, will be eliminated by natural selection. Those especially helpful will be intensified and modified, but the great body of characters, the marks by which we know the species, will be neither helpful nor hurtful. These will be meaningless streaks and spots, variations in size of parts, peculiar relations of scales or hair or feathers, little matters which can neither help nor hurt, but which have all the persistence heredity can give.

Foot-notes to Evolution. A Series of Popular Addresses on the Evolution of Life (1898), 218.

Thus, remarkably, we do not know the true number of species on earth even to the nearest order of magnitude. My own guess, based on the described fauna and flora and many discussions with entomologists and other specialists, is that the absolute number falls somewhere between five and thirty million.

Conservation for the 21st Century 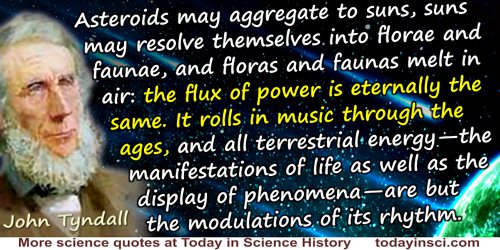 To Nature nothing can be added; from Nature nothing can be taken away; the sum of her energies is constant, and the utmost man can do in the pursuit of physical truth, or in the applications of physical knowledge, is to shift the constituents of the never-varying total. The law of conservation rigidly excludes both creation and annihilation. Waves may change to ripples, and ripples to waves; magnitude may be substituted for number, and number for magnitude; asteroids may aggregate to suns, suns may resolve themselves into florae and faunae, and floras and faunas melt in air: the flux of power is eternally the same. It rolls in music through the ages, and all terrestrial energyâ€”the manifestations of life as well as the display of phenomenaâ€”are but the modulations of its rhythm.

Unlike any creature that lived before, humans have become a geophysical force, swiftly changing the atmosphere and climate as well as the composition of the worldâ€™s fauna and flora. â€¦ Darwinâ€™s dice have rolled badly for Earth.

What happened to those Ice Age beasts? What caused the mammoth and mastodon and wooly rhinoceros to pay the ultimate Darwinian penalty, while bison and musk ox survived? Why didn't the fauna of Africa suffer the kinds of losses evident in other regions of the world? And if something like climatic change caused the extinction of North America's Pleistocene horse, how have feral horses managed to reestablish themselves on the western range?

When living with the Indians in their homes and pursuing my ethnological studies: One day I suddenly realized with a rude shock that, unlike my Indian friends, I was an alien, a stranger in my native land; its fauna and flora had no fond, familiar place amid my mental imagery, nor did any thoughts of human aspiration or love give to its hills and valleys the charm of personal companionship. I was alone, even in my loneliness.