Doubtless it is true that while consciousness is occupied in the scientific interpretation of a thing, which is now and again “a thing of beauty,” it is not occupied in the aesthetic appreciation of it. But it is no less true that the same consciousness may at another time be so wholly possessed by the aesthetic appreciation as to exclude all thought of the scientific interpretation. The inability of a man of science to take the poetic view simply shows his mental limitation; as the mental limitation of a poet is shown by his inability to take the scientific view. The broader mind can take both.

Every where I see bliss, from which I alone am irrevocably excluded.

Geological facts being of an historical nature, all attempts to deduce a complete knowledge of them merely from their still, subsisting consequences, to the exclusion of unexceptionable testimony, must be deemed as absurd as that of deducing the history of ancient Rome solely from the medals or other monuments of antiquity it still exhibits, or the scattered ruins of its empire, to the exclusion of a Livy, a Sallust, or a Tacitus.

In the mathematical investigations I have usually employed such methods as present themselves naturally to a physicist. The pure mathematician will complain, and (it must be confessed) sometimes with justice, of deficient rigour. But to this question there are two sides. For, however important it may be to maintain a uniformly high standard in pure mathematics, the physicist may occasionally do well to rest content with arguments which are fairly satisfactory and conclusive from his point of view. To his mind, exercised in a different order of ideas, the more severe procedure of the pure mathematician may appear not more but less demonstrative. And further, in many cases of difficulty to insist upon the highest standard would mean the exclusion of the subject altogether in view of the space that would be required.

Physicists speak of the particle representation or the wave representation. Bohr's principle of complementarity asserts that there exist complementary properties of the same object of knowledge, one of which if known will exclude knowledge of the other. We may therefore describe an object like an electron in ways which are mutually exclusive—e.g., as wave or particle—without logical contradiction provided we also realize that the experimental arrangements that determine these descriptions are similarly mutually exclusive. Which experiment—and hence which description one chooses—is purely a matter of human choice.

The chemist works along his own brilliant line of discovery and exposition; the astronomer has his special field to explore; the geologist has a well-defined sphere to occupy. It is manifest, however, that not one of these men can tell the whole tale, and make a complete story of creation. Another man is wanted. A man who, though not necessarily going into formal science, sees the whole idea, and speaks of it in its unity. This man is the theologian. He is not a chemist, an astronomer, a geologist, a botanistâ€”â€”he is more: he speaks of circles, not of segments; of principles, not of facts; of causes and purposes rather than of effects and appearances. Not that the latter are excluded from his study, but that they are so wisely included in it as to be put in their proper places.

The law of conservation rigidly excludes both creation and annihilation. Waves may change to ripples, and ripples to waves,â€”magnitude may be substituted for number, and number for magnitude,â€”asteroids may aggregate to suns, suns may resolve themselves into florae and faunae, and florae and faunae melt in air,â€”the flux of power is eternally the same. It rolls in music through the ages, and all terrestrial energy,â€”the manifestations of life, as well as the display of phenomena, are but the modulations of its rhythm.

The scientific method â€¦ is nothing but the exclusion of subjective opinions as far as possible, by the devising of experiments where observation can give objective answers, yes or no, to questions whether events are causally connected.

In Science and the Humanities: The Rickman Godlee Lecture Delivered At University College London 25 October 1956 (1956), 12. 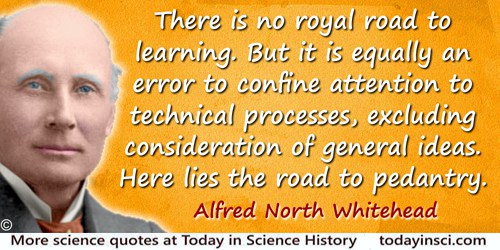 There is no royal road to learning. But it is equally an error to confine attention to technical processes, excluding consideration of general ideas. Here lies the road to pedantry.

There were taken apples, and â€¦ closed up in wax. â€¦ After a month's space, the apple inclosed in was was as green and fresh as the first putting in, and the kernals continued white. The cause is, for that all exclusion of open air, which is ever predatory, maintaineth the body in its first freshness and moisture.
[In the U.S., since the 1920s, (to replace the fruit's original wax coating that is lost in the cleaning process after harvesting), natural waxes, such as carnauba wax, are applied in an extremely thin coating, to reduce loss of moisture and maintain crispness and appearance.]

We know the laws of trial and error, of large numbers and probabilities. We know that these laws are part of the mathematical and mechanical fabric of the universe, and that they are also at play in biological processes. But, in the name of the experimental method and out of our poor knowledge, are we really entitled to claim that everything happens by chance, to the exclusion of all other possibilities?

â€śUnless,â€ť said I [Socrates], â€śeither philosophers become kings in our states or those whom we now call our kings and rulers take to the pursuit of' philosophy seriously and adequately, and there is a conjunction of these two things, political power and philosophic intelligence, while the motley horde of the natures who at present pursue either apart from the other are compulsorily excluded, there can be no cessation of troubles, dear Glaucon, for our states, nor, I fancy for the human race either. Nor, until this happens, will this constitution which we have been expounding in theory ever be put into practice within the limits of possibility and see the light of the sun.â€ť