Although with the majority of those who study and practice in these capacities [engineers, builders, surveyors, geographers, navigators, hydrographers, astronomers], secondhand acquirements, trite formulas, and appropriate tables are sufficient for ordinary purposes, yet these trite formulas and familiar rules were originally or gradually deduced from the profound investigations of the most gifted minds, from the dawn of science to the present day.  The further developments of the science, with its possible applications to larger purposes of human utility and grander theoretical generalizations, is an achievement reserved for a few of the choicest spirits, touched from time to time by Heaven to these highest issues. The intellectual world is filled with latent and undiscovered truth as the material world is filled with latent electricity.

At the present time there exist problems beyond our ability to solve, not because of theoretical difficulties, but because of insufficient means of mechanical computation.

By the nineteenth century  new circumstances called for new conformity enforcers The government locked you in a house of penitencea penitentiarywhere your feelings of remorse would theoretically pummel you without cease.

Common-sense contents itself with the unreconciled contradiction, laughs when it can, and weeps when it must, and makes, in short, a practical compromise, without trying a theoretical solution.

He [Heinrich Rose] looked upon the various substances that he was manipulating, as well as their reactions, under a thoroughly familial point of view: they were like so many children entrusted to his tutelage. Every time he explained simple, clear, well-defined phenomena, he assumed a jovial and smiling countenance; on the other hand, he almost got angry at certain mischievous [Remelés italics] bodies, the properties of which did not obey ordinary laws and troubled general theoretical views; in his eyes, this was unruly behavior.

I do not see any reason to assume that the heuristic significance of the principle of general relativity is restricted to gravitation and that the rest of physics can be dealt with separately on the basis of special relativity, with the hope that later on the whole may be fitted consistently into a general relativistic scheme. I do not think that such an attitude, although historically understandable, can be objectively justified. The comparative smallness of what we know today as gravitational effects is not a conclusive reason for ignoring the principle of general relativity in theoretical investigations of a fundamental character. In other words, I do not believe that it is justifiable to ask: What would physics look like without gravitation?

I have a boundless admiration for the solitary genius which enabled [Hermann Oberth] to bring into focus all of the essential elements of a gigantic concept, together with the human greatness which allowed him, in shy reserve, to bear with equanimity the crucify hims as well as the hosannas of public opinion. I myself owe him a debt of gratitude not only for being the guiding light of my life, but also for my first contact with the theoretical and practical aspects of rocket technology and space travel.

I think she [Rosalind Franklin] was a good experimentalist but certainly not of the first rank. She was simply not in the same class as Eigen or Bragg or Pauling, nor was she as good as Dorothy Hodgkin. She did not even select DNA to study. It was given to her. Her theoretical crystallography was very average.

Letter to Charlotte Friend (18 Sep 1979). In Francis Harry Compton Crick Papers, Wellcome Library for the History and Understanding of Medicine.

It is a common rule in theoretical physics, one accepted by many physicists, that anything not forbidden by the basic laws of nature must take place. 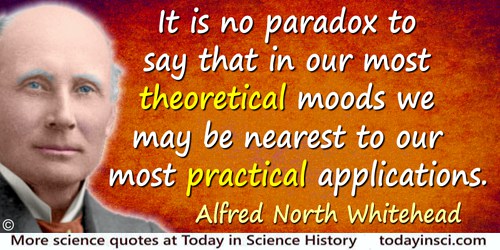 It is no paradox to say that in our most theoretical moods we may be nearest to our most practical applications.

In Introduction to Mathematics, 100. 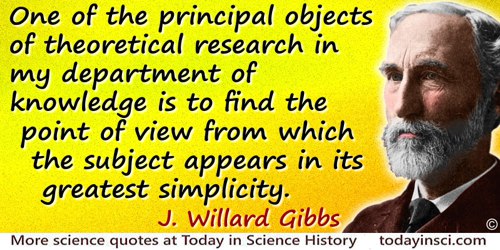 One of the principal objects of theoretical research in my department of knowledge is to find the point of view from which the subject appears in its greatest simplicity.

In letter published in Proceedings of the American Academy of Arts and Sciences (1881), 420.

Science can be defined as the observation, identification, description, experimental investigation and theoretical explanation of natural phenomena.

Since the world is what it is, it is clear that valid reasoning from sound principles cannot lead to error; but a principle may be so nearly true as to deserve theoretical respect, and yet may lead to practical consequences which we feel to be absurd. There is therefore a justification for common sense in philosophy, but only as showing that our theoretical principles cannot be quite correct so long as their consequences are condemned by an appeal to common sense which we feel to be irresistible.

The philosopher may very justly be delighted with the extent of his views, the artificer with the readiness of his hands, but let the one remember that without mechanical performance, refined speculation is an empty dream, and the other that without theoretical reasoning, dexterity is little more than brute instinct.

The theoretical understanding of the world, which is the aim of philosophy, is not a matter of great practical importance to animals, or to savages, or even to most civilized men.

These sciences, Geometry, Theoretical Arithmetic and Algebra, have no principles besides definitions and axioms, and no process of proof but deduction; this process, however, assuming a most remarkable character; and exhibiting a combination of simplicity and complexity, of rigour and generality, quite unparalleled in other subjects.

We must take the abiding spiritual values which inhere in the deep experiences of religion in all ages and give them new expression in terms of the framework which our new knowledge gives us. Science forces religion to deal with new ideas in the theoretical realm and new forces in the practical realm.

We pass with admiration along the great series of mathematicians, by whom the science of theoretical mechanics has been cultivated, from the time of Newton to our own. There is no group of men of science whose fame is higher or brighter. The great discoveries of Copernicus, Galileo, Newton, had fixed all eyes on those portions of human knowledge on which their successors employed their labors. The certainty belonging to this line of speculation seemed to elevate mathematicians above the students of other subjects; and the beauty of mathematical relations and the subtlety of intellect which may be shown in dealing with them, were fitted to win unbounded applause. The successors of Newton and the Bernoullis, as Euler, Clairaut, DAlembert, Lagrange, Laplace, not to introduce living names, have been some of the most remarkable men of talent which the world has seen.

[Edison] definitely ended the distinction between the theoretical man of science and the practical man of science, so that today we think of scientific discoveries in connection with their possible present or future application to the needs of man. He took the old rule-of-thumb methods out of industry and substituted exact scientific knowledge, while, on the other hand, he directed scientific research into useful channels.

Webmaster, so far, has been unable to find a primary source that adds the ending clause. (Can you help?) But Feynman certainly several times stated the idea in the opening clause. See, for example, the quote, The theory of quantum mechanics  supplied the theory behind chemistry. So, fundamental theoretical chemistry is really physics. on the Richard Feynman Quotes page on this website.