Nemo mathematicus genium indemnatus habebit.
No mathematician is esteemed a genius until condemned.

Mathematician as used here, is in the sense of astrologer, or soothsayer. In Liberii, Satura VI, 562.

It may be unpopular and out-of-date to saybut I do not think that a scientific result which gives us a better understanding of the world and makes it more harmonious in our eyes should be held in lower esteem than, say, an invention which reduces the cost of paving roads, or improves household plumbing.

From final remarks in 'The Semantic Conception of Truth and the Foundations of Semantics' (1944), collected in Leonard Linsky (ed.), Semantics and the Philosophy of Language: A Collection of Readings (1952), 41. 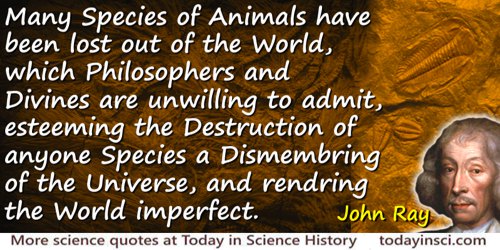 Mathematics will not be properly esteemed in wider circles until more than the a b c of it is taught in the schools, and until the unfortunate impression is gotten rid of that mathematics serves no other purpose in instruction than the formal training of the mind. The aim of mathematics is its content, its form is a secondary consideration and need not necessarily be that historic form which is due to the circumstance that mathematics took permanent shape under the influence of Greek logic.

On my return from the first exploration of the canyons of the Colorado, I found that our journey had been the theme of much newspaper writing. A story of disaster had been circulated, with many particulars of hardship and tragedy, so that it was currently believed throughout the United States that all the members of the party were lost save one. A good friend of mine had gathered a great number of obituary notices, and it was interesting and rather flattering to me to discover the high esteem in which I had been held by the people of the United States. In my supposed death I had attained to a glory which I fear my continued life has not fully vindicated.

First paragraph in 'Preface' to Canyons of the Colorado (1895), iii.

One reason why mathematics enjoys special esteem, above all other sciences, is that its laws are absolutely certain and indisputable, while those of other sciences are to some extent debatable and in constant danger of being overthrown by newly discovered facts.

In Albert Einstein, translated by G.B. Jeffery and W. Perrett, 'Geometry and Experience',Sidelights on Relativity (1922), 27.

Scientists are entitled to be proud of their accomplishments, and what accomplishments can they call theirs except the things they have done or thought of first? People who criticize scientists for wanting to enjoy the satisfaction of intellectual ownership are confusing possessiveness with pride of possession. Meanness, secretiveness and, sharp practice are as much despised by scientists as by other decent people in the world of ordinary everyday affairs; nor, in my experience, is generosity less common among them, or less highly esteemed.

So highly did the ancients esteem the power of figures and numbers, that Democritus ascribed to the figures of atoms the first principles of the variety of things; and Pythagoras asserted that the nature of things consisted of numbers.

The aim of poetry is to give a high and voluptuous plausibility to what is palpably not true. I offer the Twenty-third Psalm as an example: The Lord is my shepherd: I shall not want. It is immensely esteemed by the inmates of almshouses, and by gentlemen waiting to be hanged. I have to limit my own reading of it, avoiding soft and yielding moods, for I too, in my way, am a gentleman waiting to be hanged, as you are.

The moral faculties are generally and justly esteemed as of higher value than the intellectual powers. But we should bear in mind that the activity of the mind in vividly recalling past impressions is one of the fundamental though secondary bases of conscience. This affords the strongest argument for educating and stimulating in all possible ways the intellectual faculties of every human being.

The qualities of bodies, which admit neither intension nor remission of degrees, and which are found to belong to fill bodies within the reach of our experiments, are to be esteemed the universal qualities of all bodies whatsoever.

From Isaac Newton, Rules of Reasoning in Philosophy, Rule 3, as translated by Andrew Motte in The Mathematical Principles of Natural Philosophy (1803), Vol. 2, 160.

The sweetest and most inoffensive path of life leads through the avenues of science and learning; and whoever can either remove any obstruction in this way, or open up any new prospect, ought, so far, to be esteemed a benefactor to mankind.

There has not been any science so much esteemed and honored as this of mathematics, nor with so much industry and vigilance become the care of great men, and labored in by the potentates of the world, viz. emperors, kings, princes, etc.

We are so presumptuous that we would wish to be known by all the world, even by people who shall come after, when we shall be no more; and we are so vain that the esteem of five or six neighbours delights and contents us.

We do not worry about being respected in towns through which we pass. But if we are going to remain in one for a certain time, we do worry. How long does this time have to be?

In Pensées (1670), Section 2, No. 7. As translated in in W.H. Auden and L. Kronenberger (eds.) The Viking Book of Aphorisms (1966), 135. Also translated as We do not trouble ourselves about being esteemed in the towns through which we pass. But if we are to remain a little while there, we are so concerned. How long is necessary? A time commensurate with our vain and paltry life, in Blaise Pascal and W.F. Trotter (trans.), 'Thoughts', No. 149, collected in Charles W. Eliot (ed.), The Harvard Classics (1910), Vol. 48, 60. From the original French, Les villes par où on passe, on ne se soucie pas dy être estimé. Mais, quand on y doit demeurer un peu de temps, on sen soucie. Combien de temps faut-il? Un temps proportionné à notre durée vaine et chétive, in Ernest Havet (ed.), Pensées de Pascal (1892), 123.