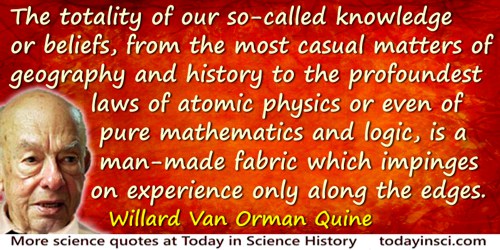 Dr. M.L. von Franz has explained the circle (or sphere) as a symbol of Self. It expresses the totality of the psyche in all its aspects, including the relationship between man and the whole of nature. It always points to the single most vital aspect of life, its ultimate wholeness.

Each and every loss becomes an instance of ultimate tragedysomething that once was, but shall never be known to us. The hump of the giant deeras a nonfossilizable item of soft anatomyshould have fallen into the maw of erased history. But our ancestors provided a wondrous rescue, and we should rejoice mightily. Every new item can instruct us; every unexpected object possesses beauty for its own sake; every rescue from historys great shredding machine isand I dont know how else to say thisa holy act of salvation for a bit of totality.

If any person thinks the examination of the rest of the animal kingdom an unworthy task, he must hold in like disesteem the study of man. For no one can look at the primordia of the human frameblood, flesh, bones, vessels, and the likewithout much repugnance. Moreover, in every inquiry, the examination of material elements and instruments is not to be regarded as final, but as ancillary to the conception of the total form. Thus, the true object of architecture is not bricks, mortar or timber, but the house; and so the principal object of natural philosophy is not the material elements, but their composition, and the totality of the form to which they are subservient, and independently of which they have no existence.

On Parts of Animals, Book 1, Chap 5, 645a, 26-36. In W. Ogle (trans.), Aristotle on the Parts of Animals (1882), 17. Alternate translations: primodia = elements; Moreover ... Thus = Moreover, when anyone of the parts or structures, be it which it may, is under discussion, it must not be supposed that it is its material composition to which attention is being directed or which is the object of the discussion, but rather the total form. Similarly; form ... subservient, and = totality of the substance. See alternate translation in Jonathan Barnes (ed.), The Complete Works of Aristotle (1984), Vol. 1, 1004.

If I were not an atheist, I would believe in a God who would choose to save people on the basis of the totality of their lives and not the pattern of their words. I think he would prefer an honest and righteous atheist to a TV preacher whose every word is

The aim of science is, on the one hand, as complete a comprehension as possible of the connection between perceptible experiences in their totality, and, on the other hand, the achievement of this aim by employing a minimum of primary concepts and relations.

The fact that man produces a concept I besides the totality of his mental and emotional experiences or perceptions does not prove that there must be any specific existence behind such a concept. We are succumbing to illusions produced by our self-created language, without reaching a better understanding of anything. Most of so-called philosophy is due to this kind of fallacy.

The totality of life, known as the biosphere to scientists and creation to theologians, is a membrane of organisms wrapped around Earth so thin it cannot be seen edgewise from a space shuttle, yet so internally complex that most species composing it remain undiscovered. The membrane is seamless. From Everest's peak to the floor of the Mariana Trench, creatures of one kind or another inhabit virtually every square inch of the planetary surface.

The totality of our so-called knowledge or beliefs, from the most casual matters of geography and history to the profoundest laws of atomic physics or even of pure mathematics and logic, is a man-made fabric which impinges on experience only along the edges. Or, to change the figure, total science is like a field of force whose boundary conditions are experience. A conflict with experience at the periphery occasions readjustments in the interior of the field. Truth values have to be redistributed over some of our statements. Reevaluation of some statements entails reevaluation of others, because of their logical interconnections—the logical laws being in turn simply certain further statements of the system, certain further elements of the field.

There exists, if I am not mistaken, an entire world which is the totality of mathematical truths, to which we have access only with our mind, just as a world of physical reality exists, the one like the other independent of ourselves, both of divine creation.

Truth is a totality, the sum of many overlapping partial images. History, on the other hand, sacrifices totality in the interest of continuity.

Unverified. Can you help?

[The] first postulate of the Principle of Uniformity, namely, that the laws of nature are invariant with time, is not peculiar to that principle or to geology, but is a common denominator of all science. In fact, instead of being an assumption or an ad hoc hypothesis, it is simply a succinct summation of the totality of all experimental and observational evidence.