At the beginning of its existence as a science, biology was forced to take cognizance of the seemingly boundless variety of living things, for no exact study of life phenomena was possible until the apparent chaos of the distinct kinds of organisms had been reduced to a rational system. Systematics and morphology, two predominantly descriptive and observational disciplines, took precedence among biological sciences during the eighteenth and nineteenth centuries. More recently physiology has come to the foreground, accompanied by the introduction of quantitative methods and by a shift from the observationalism of the past to a predominance of experimentation.

Cosmology, for centuries consisting of speculation based on a minimum of observational evidence and a maximum of philosophical predilection, became in the twentieth century an observational science, its theories now subject to verification or refutation to a degree previously unimaginable.

Opening sentence in 'Philosophical Values and Observation in Edwin Hubble's Choice of a Model of the Universe', Historical Studies in the Physical Sciences (1982), 13, No. 1, 41.

For the truth of the conclusions of physical science, observation is the supreme Court of Appeal. It does not follow that every item which we confidently accept as physical knowledge has actually been certified by the Court; our confidence is that it would be certified by the Court if it were submitted. But it does follow that every item of physical knowledge is of a form which might be submitted to the Court. It must be such that we can specify (although it may be impracticable to carry out) an observational procedure which would decide whether it is true or not. Clearly a statement cannot be tested by observation unless it is an assertion about the results of observation. Every item of physical knowledge must therefore be an assertion of what has been or would be the result of carrying out a specified observational procedure.

Hubble's observations suggested that there was a time, called the big bang, when the universe was infinitesimally small and infinitely dense. Under such conditions all the laws of science, and therefore all ability to predict the future, would break down. If there were events earlier than this time, then they could not affect what happens at the present time. Their existence can be ignored because it would have no observational consequences. One may say that time had a beginning at the big bang, in the sense that earlier times simply would not be defined. It should be emphasized that this beginning in time is very different from those that had been considered previously. In an unchanging universe a beginning in time is something that has to be imposed by some being outside the universe; there is no physical necessity for a beginning. One can imagine that God created the universe at literally any time in the past. On the other hand, if the universe is expanding, there may be physical reasons why there had to be a beginning. One could still imagine that God created the universe at the instant of the big bang, or even afterwards in just such a way as to make it look as though there had been a big bang, but it would be meaningless to suppose that it was created before the big bang. An expanding universe does not preclude a creator, but it does place limits on when he might have carried out his job!

In this physical world there is no real chaos; all is in fact orderly; all is ordered by the physical principles. Chaos is but unperceived order- it is a word indicating the limitations of the human mind and the paucity of observational facts. The words chaos, accidental, chance, unpredictable," are conveniences behind which we hide our ignorance.

It has been said that no science is established on a firm basis unless its generalisations can be expressed in terms of number, and it is the special province of mathematics to assist the investigator in finding numerical relations between phenomena. After experiment, then mathematics. While a science is in the experimental or observational stage, there is little scope for discerning numerical relations. It is only after the different workers have collected data that the mathematician is able to deduce the required generalisation. Thus a Maxwell followed Faraday and a Newton completed Kepler.

In Higher Mathematics for Students of Chemistry and Physics (1902), 3.

It is also a good rule not to put overmuch confidence in the observational results that are put forward until they are confirmed by theory.

No theory ever agrees with all the facts in its domain, yet it is not always the theory that is to blame. Facts are constituted by older ideologies, and a clash between facts and theories may be proof of progress. It is also a first step in our attempt to find the principles implicit in familiar observational notions.

Quantum theory thus reveals a basic oneness of the universe. It shows that we cannot decompose the world into independently existing smallest units. As we penetrate into matter, nature does not show us any isolated building blocks, but rather appears as a complicated web of relations between the various parts of the whole. These relations always include the observer in an essential way. The human observer constitute the final link in the chain of observational processes, and the properties of any atomic object can be understood only in terms of the objects interaction with the observer.

The difference between myth and science is the difference between divine inspiration of unaided reason (as Bertrand Russell put it) on the one hand and theories developed in observational contact with the real world on the other. It is the difference between the belief in prophets and critical thinking, between Credo quia absurdum (I believe because it is absurdTertullian) and De omnibus est dubitandum (Everything should be questionedDescartes). To try to write a grand cosmical drama leads necessarily to myth. To try to let knowledge substitute ignorance in increasingly large regions of space and time is science.

The essential fact is simply that all the pictures which science now draws of nature, and which alone seem capable of according with observational facts, are mathematical pictures.  It can hardly be disputed that nature and our conscious mathematical minds work according to the same laws. 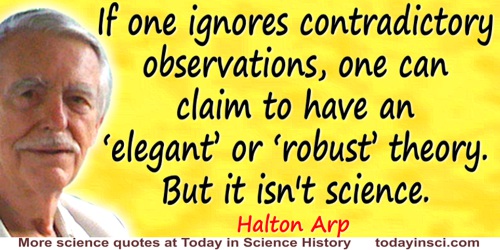 When Big Bang proponents make assertions such as  the evidence taken together  hangs together beautifully, they overlook observational facts that have been piling up for 25 years and that have now become overwhelming. Of course, if one ignores contradictory observations, one can claim to have an elegant or robust theory. But it isnt science.

[The] first postulate of the Principle of Uniformity, namely, that the laws of nature are invariant with time, is not peculiar to that principle or to geology, but is a common denominator of all science. In fact, instead of being an assumption or an ad hoc hypothesis, it is simply a succinct summation of the totality of all experimental and observational evidence.