But it will be found... that one universal law prevails in all these phenomena. Where two portions of the same light arrive in the eye by different routes, either exactly or very nearly in the same direction, the appearance or disappearance of various colours is determined by the greater or less difference in the lengths of the paths.

Lecture XIV. 'Of Physical Optics'. In A Syllabus of a Course of Lectures on Natural and Experimental Philosophy (1802), 112-4.

It is hard to describe the exact route to scientific achievement, but a good scientist doesnt get lost as he travels it.

Epigraph in Isaac Asimovs Book of Science and Nature Quotations (1988), 290.

It is possible for a mathematician to be too strong for a given occasion. He forces through, where another might be driven to a different, and possible more fruitful, approach. (So a rock climber might force a dreadful crack, instead of finding a subtle and delicate route.)

Maxwell, like every other pioneer who does not live to explore the country he opened out, had not had time to investigate the most direct means of access to the country, or the most systematic way of exploring it. This has been reserved for Oliver Heaviside to do. Maxwells treatise is cumbered with the débris of his brilliant lines of assault, of his entrenched camps, of his battles. Oliver Heaviside has cleared those away, has opened up a direct route, has made a broad road, and has explored a considerable tract of country.

The distributed architecture and its technique of packet switching were built around the problem of getting messages delivered despite blockages, holes and malfunctions. Imagine the poor censor faced with such a system. There is no central exchange to seize and hold; messages actively seek out alternative routes so that even if one path is blocked another may open up. Here is the civil libertarians dream.

The Internet treats censorship as a malfunction and routes around it.

In Richard Rogers, 'The Internet Treats Censorship as a Malfunction and Routes Around It? : A New Media Approach to the Study of State Internet Censorship', the attribution of this quote to John Gilmore is supported by giving an excerpt from the notes in Joseph Reagle, 'Why the Internet is Good' [source: Gilmore states: I have never found where I first said this. But everyone believes it was me, as do I. If you find an appearance of this quote from before March 94, please let me know.] Also cited as attribute to John Gilmore in Peter H. Lewis, 'Limiting a Medium Without Boundaries; How Do You Let the Good Fish Through the Net While Blocking the Bad?', New York Times (15 Jan 1996), D1. The Rogers article is collected in Jussi Parikka and Tony D. Sampson (eds.), The Spam Book: On Viruses, Porn, and Other Anomalies from the Dark Side of Digital Culture (2009), 243. 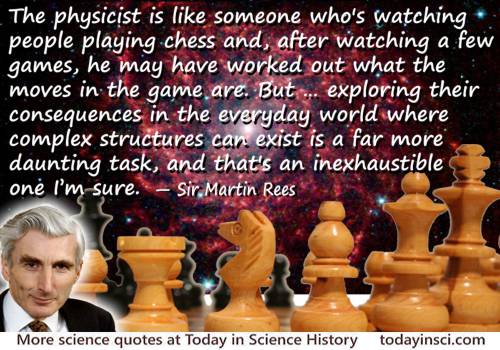 The physicist is like someone whos watching people playing chess and, after watching a few games, he may have worked out what the moves in the game are. But understanding the rules is just a trivial preliminary on the long route from being a novice to being a grand master. So even if we understand all the laws of physics, then exploring their consequences in the everyday world where complex structures can exist is a far more daunting task, and thats an inexhaustible one I'm sure.

Those who know physicists and mountaineers know the traits they have in common: a dream-and-drive spirit, a bulldog tenacity of purpose, and an openness to try any route to the summit.

To get your name well enough known that you can run for a public office, some people do it by being great lawyers or philanthropists or business people or work their way up the political ladder. I happened to become known from a different route.

To have a railroad, there must have been first the discoverers, who found out the properties of wood and iron, fire and water, and their latent power to carry men over the earth; next the organizers, who put these elements together, surveyed the route, planned the structure, set men to grade the hill, to fill the valley, and pave the road with iron bars; and then the administrators, who after all that is done, procure the engines, engineers, conductors, ticket-distributors, and the rest of the hands; they buy the coal and see it is not wasted, fix the rates of fare, calculate the savings, and distribute the dividends. The discoverers and organizers often fare hard in the world, lean men, ill-clad and suspected, often laughed at, while the administrator is thought the greater man, because he rides over their graves and pays the dividends, where the organizer only called for the assessments, and the discoverer told what men called a dream. What happens in a railroad happens also in a Church, or a State.

Address at the Melodeon, Boston (5 Mar 1848), 'A Discourse occasioned by the Death of John Quincy Adams'. Collected in Discourses of Politics: The Collected Works of Theodore Parker: Part 4 (1863), 139. Note: Ralph Waldo Emerson earlier used the phrase pave the road with iron bars, in Nature (1836), 17.

there is no prescribed route to follow to arrive at a new idea. You have to make the intuitive leap. But the difference is that once youve made the intuitive leap you have to justify it by filling in the intermediate steps. In my case, it often happens that I have an idea, but then I try to fill in the intermediate steps and find that they dont work, so I have to give it up.