A fake fortuneteller can be tolerated. But an authentic soothsayer should be shot on sight. Cassandra did not get half the kicking around she deserved. 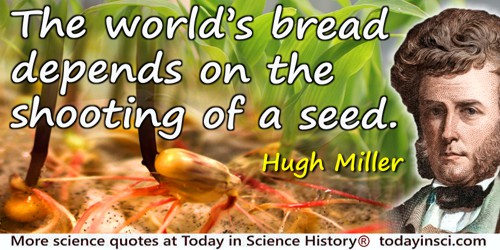 According to the poet, The worlds bread depends on the shooting of a seed.

In The Testimony of the Rocks (1857), 26. [Webmaster has not yet been able to identify the unnamed poet.]

As quoted by Walter Gratzer, in book review titled 'The Bomb and the Bumble-Bees' (about the book Late Night Thoughts, by Lewis Thomas), Nature (15 Nov 1984), 31, 211. The original text expresses the quote as It was the organic chemist, Homer Adkins, who defined basic research as shooting an arrow into the air, and.

Bradley is one of the few basketball players who have ever been appreciatively cheered by a disinterested away-from-home crowd while warming up. This curious event occurred last March, just before Princeton eliminated the Virginia Military Institute, the years Southern Conference champion, from the NCAA championships. The game was played in Philadelphia and was the last of a tripleheader. The people there were worn out, because most of them were emotionally committed to either Villanova or Temple-two local teams that had just been involved in enervating battles with Providence and Connecticut, respectively, scrambling for a chance at the rest of the country. A group of Princeton players shooting basketballs miscellaneously in preparation for still another game hardly promised to be a high point of the evening, but Bradley, whose routine in the warmup time is a gradual crescendo of activity, is more interesting to watch before a game than most players are in play. In Philadelphia that night, what he did was, for him, anything but unusual. As he does before all games, he began by shooting set shots close to the basket, gradually moving back until he was shooting long sets from 20 feet out, and nearly all of them dropped into the net with an almost mechanical rhythm of accuracy. Then he began a series of expandingly difficult jump shots, and one jumper after another went cleanly through the basket with so few exceptions that the crowd began to murmur. Then he started to perform whirling reverse moves before another cadence of almost steadily accurate jump shots, and the murmur increased. Then he began to sweep hook shots into the air. He moved in a semicircle around the court. First with his right hand, then with his left, he tried seven of these long, graceful shots-the most difficult ones in the orthodoxy of basketball-and ambidextrously made them all. The game had not even begun, but the presumably unimpressible Philadelphians were applauding like an audience at an opera.

Conservation is a bird that flies faster than the shot we aim at it.

Every species of plant and animal is determined by a pool of germ plasm that has been most carefully selected over a period of hundreds of millions of years. We can understand now why it is that mutations in these carefully selected organisms almost invariably are detrimental.The situation can be suggested by a statement by Dr. J.B.S. Haldane: My clock is not keeping perfect time. It is conceivable that it will run better if I shoot a bullet through it; but it is much more probable that it will stop altogether. Professor George Beadle, in this connection, has asked: What is the chance that a typographical error would improve Hamlet?

Get a shot off fast. This upsets him long enough to let you make your second shot perfect.

Is evolution a theory, a system or a hypothesis? It is much more: it is a general condition to which all theories, all hypotheses, all systems must bow and which they must satisfy henceforth if they are to be thinkable and true. Evolution is a light illuminating all facts, a curve that all lines must follow. ... The consciousness of each of us is evolution looking at itself and reflecting upon itself....Man is not the center of the universe as once we thought in our simplicity, but something much more wonderfulthe arrow pointing the way to the final unification of the world in terms of life. Man alone constitutes the last-born, the freshest, the most complicated, the most subtle of all the successive layers of life. ... The universe has always been in motion and at this moment continues to be in motion. But will it still be in motion tomorrow? ... What makes the world in which we live specifically modern is our discovery in it and around it of evolution. ... Thus in all probability, between our modern earth and the ultimate earth, there stretches an immense period, characterized not by a slowing-down but a speeding up and by the definitive florescence of the forces of evolution along the line of the human shoot.

My first view - a panorama of brilliant deep blue ocean, shot with shades of green and gray and white - was of atolls and clouds. Close to the window I could see that this Pacific scene in motion was rimmed by the great curved limb of the Earth. It had a thin halo of blue held close, and beyond, black space. I held my breath, but something was missing - I felt strangely unfulfilled. Here was a tremendous visual spectacle, but viewed in silence. There was no grand musical accompaniment; no triumphant, inspired sonata or symphony. Each one of us must write the music of this sphere for ourselves.

Nothing is so beautiful as spring
When weeds in wheels, shoot long and lovely and lush;...

Shoot for the moon. Even if you miss, youll land among the stars

Some men who call themselves pessimists because they cannot read good into the operations of nature forget that they cannot read evil. In morals the law of competition no more justifies personal, official, or national selfishness or brutality than the law of gravity justifies the shooting of a bird.

The first time I ever saw a jet, I shot it down.

There is not a sprig of grass that shoots uninteresting to me.

Usually mathematicians have to shoot somebody to get this much publicity.

Your creatures can come into being only, like shoot from stem, as part of an endlessly renewed process of evolution.