A first step in the study of civilization is to dissect it into details, and to classify these in their proper groups. Thus, in examining weapons, they are to be classed under spear, club, sling, bow and arrow, and so forth; among textile arts are to be ranged matting, netting, and several grades of making and weaving threads; myths are divided under such headings as myths of sunrise and sunset, eclipse-myths, earthquake-myths, local myths which account for the names of places by some fanciful tale, eponymic myths which account for the parentage of a tribe by turning its name into the name of an imaginary ancestor; under rites and ceremonies occur such practices as the various kinds of sacrifice to the ghosts of the dead and to other spiritual beings, the turning to the east in worship, the purification of ceremonial or moral uncleanness by means of water or fire. Such are a few miscellaneous examples from a list of hundreds ŌĆ” To the ethnographer, the bow and arrow is the species, the habit of flattening childrenŌĆÖs skulls is a species, the practice of reckoning numbers by tens is a species. The geographical distribution of these things, and their transmission from region to region, have to be studied as the naturalist studies the geography of his botanical and zoological species.

As quoted by Walter Gratzer, in book review titled 'The Bomb and the Bumble-Bees' (about the book Late Night Thoughts, by Lewis Thomas), Nature (15 Nov 1984), 31, 211. The original text expresses the quote as ŌĆ£It was the organic chemist, Homer Adkins, who defined basic research as shooting an arrow into the air, andŌĆ”ŌĆØ. 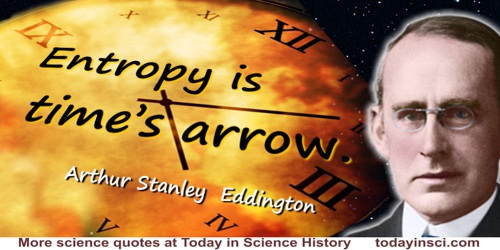 Force, then, is Force, but mark you! Not a thing,
Only a Vector;
Thy barb├©d arrows now have lost their sting,
Impotent spectre!
Thy reign, O force! is over. Now no more
Heed we thine action;
Repulsion leaves us where we were before,
So does attraction.
Both Action and Reaction now are gone.
Just ere they vanished,
Stress joined their hands in peace, and made them one;
Then they were banished....

If history is any guide at all, it seems to me to suggest that there is a final theory. In this century we have seen a convergence of the arrows of explanation, like the convergence of meridians toward the North Pole.

If one small and odd lineage of fishes had not evolved fins capable of bearing weight on land (though evolved for different reasons in lakes and seas,) terrestrial vertebrates would never have arisen. If a large extraterrestrial objectŌĆöthe ultimate random bolt from the blueŌĆöhad not triggered the extinction of dinosaurs 65 million years ago, mammals would still be small creatures, confined to the nooks and crannies of a dinosaur's world, and incapable of evolving the larger size that brains big enough for self-consciousness require. If a small and tenuous population of protohumans had not survived a hundred slings and arrows of outrageous fortune (and potential extinction) on the savannas of Africa, then Homo sapiens would never have emerged to spread throughout the globe. We are glorious accidents of an unpredictable process with no drive to complexity, not the expected results of evolutionary principles that yearn to produce a creature capable of understanding the mode of its own necessary construction.

If you would hit the mark, you must aim a little above it; Every arrow that flies feels the attraction of earth.

Is evolution a theory, a system or a hypothesis? It is much more: it is a general condition to which all theories, all hypotheses, all systems must bow and which they must satisfy henceforth if they are to be thinkable and true. Evolution is a light illuminating all facts, a curve that all lines must follow. ... The consciousness of each of us is evolution looking at itself and reflecting upon itself....Man is not the center of the universe as once we thought in our simplicity, but something much more wonderfulŌĆöthe arrow pointing the way to the final unification of the world in terms of life. Man alone constitutes the last-born, the freshest, the most complicated, the most subtle of all the successive layers of life. ... The universe has always been in motion and at this moment continues to be in motion. But will it still be in motion tomorrow? ... What makes the world in which we live specifically modern is our discovery in it and around it of evolution. ... Thus in all probability, between our modern earth and the ultimate earth, there stretches an immense period, characterized not by a slowing-down but a speeding up and by the definitive florescence of the forces of evolution along the line of the human shoot.

It was a dark and stormy night, so R. H. Bing volunteered to drive some stranded mathematicians from the fogged-in Madison airport to Chicago. Freezing rain pelted the windscreen and iced the roadway as Bing drove onŌĆöconcentrating deeply on the mathematical theorem he was explaining. Soon the windshield was fogged from the energetic explanation. The passengers too had beaded brows, but their sweat arose from fear. As the mathematical description got brighter, the visibility got dimmer. Finally, the conferees felt a trace of hope for their survival when Bing reached forwardŌĆöapparently to wipe off the moisture from the windshield. Their hope turned to horror when, instead, Bing drew a figure with his finger on the foggy pane and continued his proofŌĆöembellishing the illustration with arrows and helpful labels as needed for the demonstration.

So far as physics is concerned, timeŌĆÖs arrow is a property of entropy alone.

Take an arrow, and hold it in flame for the space of ten pulses, and when it cometh forth you shall find those parts of the arrow which were on the outsides of the flame more burned, blacked, and turned almost to coal, whereas the midst of the flame will be as if the fire had scarce touched it. This is an instance of great consequence for the discovery of the nature of flame; and sheweth manifestly, that flame burneth more violently towards the sides than in the midst.

Observing, but not with the knowledge, that a flame burns at its outside in contact with air, and there is no combustion within the flame which is not mixed with air. In Sylva Sylvarum; or a Natural History in Ten Centuries (1627), Century 1, Experiment 32. Collected in The Works of Francis Bacon (1740), Vol 3, 9.

The appearance of a disease is swift as an arrow; its disappearance slow, like a thread.

The third [argument of motion is] to the effect that the flying arrow is at rest, which result follows from the assumption that time is composed of moments: if this assumption is not granted, the conclusion will not follow.Arrow paradox

There were details like clothing, hair styles and the fragile objects that hardly ever survive for the archaeologistŌĆömusical instruments, bows and arrows, and body ornaments depicted as they were worn. ŌĆ” No amounts of stone and bone could yield the kinds of information that the paintings gave so freely

Time will soon destroy the works of famous painters and sculptors, but the Indian arrowhead will balk his efforts and Eternity will have to come to his aid. They are not fossil bones, but, as it were, fossil thoughts, forever reminding me of the mind that shaped themŌĆ” . Myriads of arrow-points lie sleeping in the skin of the revolving earth, while meteors revolve in space. The footprint, the mind-print of the oldest men.

TimeŌĆÖs arrow of ŌĆśjust historyŌĆÖ marks each moment of time with a distinctive brand. But we cannot, in our quest to understand history, be satisfied only with a mark to recognize each moment and a guide to order events in temporal sequence. Uniqueness is the essence of history, but we also crave some underlying generality, some principles of order transcending the distinction of momentsŌĆōlest we be driven mad by BorgesŌĆÖs vision of a new picture every two thousand pages in a book without end. We also need, in short, the immanence of timeŌĆÖs cycle.

When we are young, we think that science has to do with facts, with finding answers and solutions, and that it proceeds like an arrow from the primitive to the sophisticated, from mystery to light. But as we get older, we find that, while science does have to do with facts and laws, it has equally to do with wisdom.

In Introduction to Isaac Asimov and Jason A. Shulman (eds.), Isaac AsimovŌĆÖs Book of Science and Nature Quotations (1988), xix.

You can always tell the pioneers because they are face down in the mud with arrows in their backs.

Seen in various paraphrases, such as $ldquo;in the dirtŌĆØ.