All power, all subordination rests on the executioner: he is the horror and the bond of human association. Remove this incomprehensible agent from the world, and the very moment order gives way to chaos, thrones topple, and society disappears

I came by the horror naturally. Surgery is the one branch of medicine that is the most violent. After all, its violent to take up a knife and cut open a persons body and rummage around with your hands. I think I was attracted to the horrific.

Part of a longer quote that begins, You disembowel the animal on the Jean-Henri Fabre Quotes page of this website.

It was a dark and stormy night, so R. H. Bing volunteered to drive some stranded mathematicians from the fogged-in Madison airport to Chicago. Freezing rain pelted the windscreen and iced the roadway as Bing drove onconcentrating deeply on the mathematical theorem he was explaining. Soon the windshield was fogged from the energetic explanation. The passengers too had beaded brows, but their sweat arose from fear. As the mathematical description got brighter, the visibility got dimmer. Finally, the conferees felt a trace of hope for their survival when Bing reached forwardapparently to wipe off the moisture from the windshield. Their hope turned to horror when, instead, Bing drew a figure with his finger on the foggy pane and continued his proofembellishing the illustration with arrows and helpful labels as needed for the demonstration.

Lucy, dear child, mind your arithmetic. You know in the first sum of yours I ever saw there was a mistake. You had carried two (as a cab is licensed to do), and you ought, dear Lucy, to have carried but one. Is this a trifle? What would life be without arithmetic, but a scene of horrors. 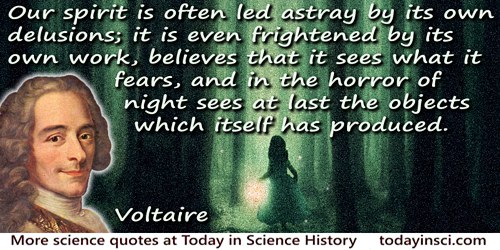 Our spirit is often led astray by its own delusions; it is even frightened by its own work, believes that it sees what it fears, and in the horror of night sees at last the objects which itself has produced.

The double horror of two Japanese city names [Hiroshima and Nagasaki] grew for me into another kind of double horror; an estranging awareness of what the United States was capable of, the country that five years before had given me its citizenship; a nauseating terror at the direction the natural sciences were going. Never far from an apocalyptic vision of the world, I saw the end of the essence of mankind an end brought nearer, or even made, possible, by the profession to which I belonged. In my view, all natural sciences were as one; and if one science could no longer plead innocence, none could.

The organism possesses certain contrivances by means of which the immunity reaction, so easily produced by all kinds of cells, is prevented from acting against the organisms own elements and so giving rise to auto toxins  so that one might be justified in speaking of a horror autotoxicus of the organism. These contrivances are naturally of the highest importance for the existence of the individual.

They look a little like the monster in Alien. Theyre horrifying to look at up close. Thats sort of what makes them fun. [About his microscopic study of ants.]

With whom [do] the adherents of historicism actually empathize[?] The answer is inevitable: with the victor. And all rulers are the heirs of those who conquered before them. Hence, empathy with the victor invariably benefits the rulers. Historical materialists know what that means. Whoever has emerged victorious participates to this day in the triumphal procession in which the present rulers step over those who are lying prostrate. According to traditional practice, the spoils are carried along in the procession. They are called cultural treasures, and a historical materialist views them with cautious detachment. For without exception the cultural treasures he surveys have an origin which he cannot contemplate without horror. They owe their existence not only to the efforts of the great minds and talents who have created them, but also to the anonymous toil of their contemporaries. There is no document of civilization which is not at the same time a document of barbarism.

You disembowel the animal and I study it alive; you make it an object of horror and pity, and I make it love you; you work in a torture and dismemberment workshop, I observe under the blue sky, on the cicadas song;  you scrutinize death, I scrutinize life.

[My grandmother] lived the latter years of her life in the horrible suspicion that electricity was dripping invisibly all over the house. It leaked, she contended, out of empty sockets if the wall switch had been left on. She would go around screwing in bulbs, and if they lighted up, she would fearfully turn off the wall switch and go back to her Pearson's or Everybody's, happy in the satisfaction that she had stopped not only a costly but dangerous leakage. nothing could ever clear this up for her.