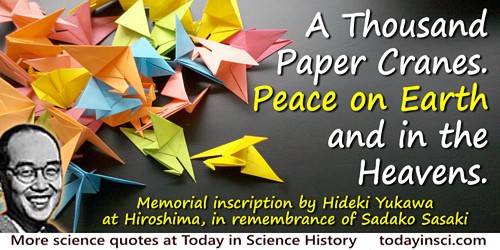 Background by anngelfra CC BY 2.0 (source)

A Thousand Paper Cranes. Peace on Earth and in the Heavens.

Inscribed, in the handwriting of Yukawa, on the surface of the bell inside the Childrens Peace Monument at Hiroshima, Japan. The crane is a symbol of longevity and happiness in Japan. The monument to mourn all the children whose death was caused by the atomic bomb was inspired by 12-year-old Sadako Sasaki, who believed that if she could fold 1000 paper cranes she would be cured of the leukemia that resulted from her exposure to the radiation of the atomic bomb when two years old. She died before completing them.

During my span of life science has become a matter of public concern and the l'art pour l'art standpoint of my youth is now obsolete. Science has become an integral and most important part of our civilization, and scientific work means contributing to its development. Science in our technical age has social, economic, and political functions, and however remote one's own work is from technical application it is a link in the chain of actions and decisions which determine the fate of the human race. I realized this aspect of science in its full impact only after Hiroshima.

For more than two years, ever since August 6, 1945, I have been looking at physicists as science writer for The New York Herald Tribune.

The context of this quote makes it interesting. White had been a staff reporter at the newspaper since 1943. The day he became science writer is notable. The first atom bomb was dropped on Hiroshima, Japan on 6 Aug 1945. The newspaper immediately responded to the need to provide information on science for the publics interest stimulated by that event. (The newspaper also had to compete with the New York Times science reporter, William L. Laurence, who had been on the inside track at the Manhattan Project, and covered the news of the atomic attacks on Japan.) In 'A Newsman Looks at Physicists', Physics Today (May 1948), 1, No. 1, 15.

I admit that the generation which produced Stalin, Auschwitz and Hiroshima will take some beating, but the radical and universal consciousness of the death of God is still ahead of us. Perhaps we shall have to colonise the stars before it is finally borne in upon us that God is not out there.

I have, also, a good deal of respect for the job they [physicists] did in the first months after Hiroshima. The world desperately needed information on this new problem in the daily life of the planet, and the physicists, after a slow start, did a good job of giving it to them. It hasnt come out with a fraction of the efficiency that the teachers might have wished, but it was infinitely more effective than anyone would have dared expect.

Let us sum up the three possible explanations of the decision to drop the bomb and its timing. The first that it was a clever and highly successful move in the field of power politics, is almost certainly correct; the second, that the timing was coincidental, convicts the American government of a hardly credible tactlessness [towards the Soviet Union]; and the third, the Roman holiday theory [a spectacular event to justify the cost of the Manhattan Project], convicts them of an equally incredible irresponsibility.

In The Political and Military Consequences of Atomic Energy (1948), 126. As cited by Maurice W. Kirby and Jonathan Rosenhead, 'Patrick Blackett (1897)' in Arjang A. Assad (ed.) and Saul I. Gass (ed.),Profiles in Operations Research: Pioneers and Innovators (2011), 17. Blackett regarded the dropping of the atomic bombs on Japan as unnecessary because a Japanese surrender was inevitable.

One must expect a war between U.S.A. and U.S.S.R. which will begin with the total destruction of London. I think the war will last 30 years, and leave a world without civilised people, from which everything will have to build afresha process taking (say) 500 years.
Stated just one month after the Hiroshima atomic explosion. Russell became one of the best-known antinuclear activists of his era.

Qualified scientists in Washington believe that the atom-blasting of Japan is the start toward heating plants the size of telephone booths for great factories, and motor-car trips of 1,000 hours on one gram of fuel. One expert estimated that with a few grams of uranium it might be possible to power the Queen Mary from Europe to the U.S. and back again. One of Americas leading scientists, Doctor Vollrath, said that the new discovery brings mans attempt to reach the moon within bounds of possibility.

REST IN PEACE. THE MISTAKE SHALL NOT BE REPEATED.

Inscription on the cenotaph at Hiroshima, Japan. Quoted in Alan L. Mackay, The Harvest of a Quiet Eye (1977. In Robert Andrews Famous Lines: a Columbia Dictionary of Familiar Quotations (1997), 340.

The Atomic Age was born in secrecy, and for two decades after Hiroshima, the high priests of the cult of the atom concealed vital information about the risks to human health posed by radiation. Dr. Alice Stewart, an audacious and insightful medical researcher, was one of the first experts to alert the world to the dangers of low-level radiation.
(Udeall is a former U.S. Secretary of the Interior.)

Quoted in Gayle Jacoba Greene, The Woman Who Knew Too Much (1999), back cover.

The city of Hiroshima stands as more than a monument to massive death and destruction. It stands as a living testament to the necessity for progress toward nuclear disarmament.

The double horror of two Japanese city names [Hiroshima and Nagasaki] grew for me into another kind of double horror; an estranging awareness of what the United States was capable of, the country that five years before had given me its citizenship; a nauseating terror at the direction the natural sciences were going. Never far from an apocalyptic vision of the world, I saw the end of the essence of mankind an end brought nearer, or even made, possible, by the profession to which I belonged. In my view, all natural sciences were as one; and if one science could no longer plead innocence, none could. 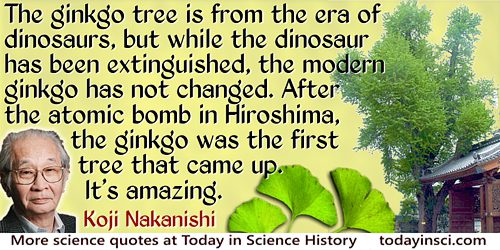 The ginkgo tree is from the era of dinosaurs, but while the dinosaur has been extinguished, the modern ginkgo has not changed. After the atomic bomb in Hiroshima, the ginkgo was the first tree that came up. Its amazing.

There is no question in my mind that we live in one of the truly bestial centuries in human history. There are plenty of signposts for the future historian, and what do they say? They say Auschwitz and Dresden and Hiroshima and Vietnam and Napalm. For many years we all woke up to the daily body count on the radio. And if there were a way to kill people with the B Minor Mass, the PentagonMadison Avenue axis would have found it.