...With these developments we have every reason to anticipate that in a time not very distant most telegraph messages across the oceans will be transmitted without cables. For short distances we need a wireless telephone, which requires no expert operat

A fear of intellectual inadequacy, of powerlessness before the tireless electronic wizards, has given rise to dozens of science-fiction fantasies of computer takeovers. ... Other scientists too are apprehensive. D. Raj Reddy, a computer scientist at Pittsburghs Carnegie-Mellon University, fears that universally available microcomputers could turn into formidable weapons. Among other things, says Reddy, sophisticated computers in the wrong hands could begin subverting a society by tampering with peoples relationships with their own computersinstructing the other computers to cut off telephone, bank and other services, for example.

An early prediction of DDoS (Distributed Denial of Service), viruses and worms like Stuxnet. As stated, without further citation, in 'The Age of Miracle Chips', Time (20 Feb 1978), 44. The article introduces a special section on 'The Computer Society.' Please contact Webmaster if you know a primary source.

As to Bells talking telegraph, it only creates interest in scientific circles, and, as a toy it is beautiful; but  its commercial value will be limited.

Speaking to a committee considering a new Copyright Bill (6 Dec 1906). In Mark Twain and William Dean Howells (ed.), Mark Twains Speeches? (1910), 320. An andiron is a metal bar, used in a pair, as a stand for logs in a fireplace. The Copyright Bill proposed to give authors, artists and musicians copyright for the term of his life and for 50 years thereafter. John Philip Sousa spoke for the musicians.

Grand telegraphic discovery today  Transmitted vocal sounds for the first time ... With some further modification I hope we may be enabled to distinguish  the timbre of the sound. Should this be so, conversation viva voce by telegraph will be a fait accompli.

I feel that I have at last struck the solution of a great problemand the day is coming when telegraph wires will be laid on to houses just like water or gasand friends converse with each other without leaving home.

I have read somewhere that the resistance offered by a wire ... is affected by the tension of the wire. If this is so, a continuous current of electricity passed through a vibrating wire should meet with a varying resistance, and hence a pulsatory action should be induced in the current ... [corresponding] in amplitude, as well as in rate of movement, to the vibrations of the string ... [Thus] the timbre of a sound [a quality essential to intelligible speech] could be transmitted ... [and] the strength of the current can be increased ad libitum without destroying the relative intensities of the vibrations.

I still find it hard to believe how far we have come, from the time I first flew on Friendship 7 and the Discovery flight. I go from being crammed into a capsule the size of a telephone booth to a place where I could live and work in space.  Amazing.

As quoted by Howard Wilkinson in 'John Glenn Had the Stuff U.S. Heroes are Made of', The Cincinnati Enquirer (20 Feb 2002). 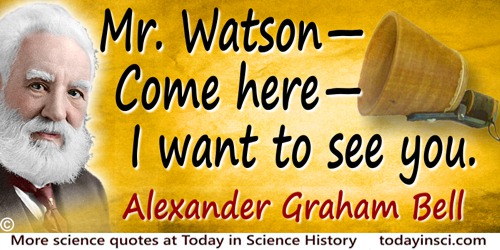 I then shouted into M [the mouthpiece] the following sentence: Mr. WatsonCome hereI want to see you. To my delight he came and declared that he had heard and understood what I said. I asked him to repeat the words. He answered You saidMr. Watson-come hereI want to see you. We then changed places and I listened at S [the reed receiver] while Mr. Watson read a few passages from a book into the mouth piece M. It was certainly the case that articulate sounds proceeded from S. The effect was loud but indistinct and muffled. If I had read beforehand the passage given by Mr. Watson I should have recognized every word. As it was I could not make out the sensebut an occasional word here and there was quite distinct. I made out to and out and further; and finally the sentence Mr. Bell do you understand what I say? DoyouunderstandwhatIsay came quite clearly and intelligibly. No sound was audible when the armature S was removed.

If you had come to me a hundred years ago, do you think I should have dreamed of the telephone? Why, even now I cannot understand it! I use it every day, I transact half my correspondence by means of it, but I dont understand it. Thnk of that little stretched disk of iron at the end of a wire repeating in your ear not only sounds, but words—not only words, but all the most delicate and elusive inflections and nuances of tone which separate one human voice from another! Is not that something of a miracle?

In the early days of telephone engineering, the mere sending of a message was so much of a miracle that nobody asked how it should be sent.

It was shortly after midday on December 12, 1901, [in a hut on the cliffs at St. John's, Newfoundland] that I placed a single earphone to my ear and started listening. The receiver on the table before me was very crude—a few coils and condensers and a coherer—no valves [vacuum tubes], no amplifiers, not even a crystal. I was at last on the point of putting the correctness of all my beliefs to test. ... [The] answer came at 12:30. ... Suddenly, about half past twelve there sounded the sharp click of the “tapper” ... Unmistakably, the three sharp clicks corresponding to three dots sounded in my ear. “Can you hear anything, Mr. Kemp?” I asked, handing the telephone to my assistant. Kemp heard the same thing as I. ... I knew then that I had been absolutely right in my calculations. The electric waves which were being sent out from Poldhu [Cornwall, England] had travelled the Atlantic, serenely ignoring the curvature of the earth which so many doubters considered a fatal obstacle. ... I knew that the day on which I should be able to send full messages without wires or cables across the Atlantic was not far distant.

Most American citizens think that life without the telephone is scarcely worth living. The American public telephone system is therefore enormous. Moreover the system belongs to an organization, the Bell companies, which can both control it and make the equipment needed. There is no surer way of getting efficient functional design than having equipment designed by an organization which is going to have to use it. Humans who would have to live with their own mistakes tend to think twice and to make fewer mistakes.

Mr. Watson, please come here. I want to see you.

Notable as the first words communicated with his telephone invention. Laboratory notebook, held by the Library of Congress (10 Mar 1876).

Neil and Buzz, I am talking to you by telephone from the Oval Office at the White House, and this certainly has to be the most historic telephone call ever made. Because of what you have done, the heavens have become a part of mans world. As you talk to us from the Sea of Tranquility, it inspires us to redouble our efforts to bring peace and tranquility to Earth.

Qualified scientists in Washington believe that the atom-blasting of Japan is the start toward heating plants the size of telephone booths for great factories, and motor-car trips of 1,000 hours on one gram of fuel. One expert estimated that with a few grams of uranium it might be possible to power the Queen Mary from Europe to the U.S. and back again. One of Americas leading scientists, Doctor Vollrath, said that the new discovery brings mans attempt to reach the moon within bounds of possibility.

Some of my youthful readers are developing wonderful imaginations. This pleases me. Imagination has brought mankind through the Dark Ages to its present state of civilization. Imagination led Columbus to discover America. Imagination led Franklin to discover electricity. Imagination has given us the steam engine, the telephone, the talking-machine and the automobile, for these things had to be dreamed of before they became realities. So I believe that dreamsday dreams, you know, with your eyes wide open and your brain-machinery whizzingare likely to lead to the betterment of the world. The imaginative child will become the imaginative man or woman most apt to create, to invent, and therefore to foster civilization. A prominent educator tells me that fairy tales are of untold value in developing imagination in the young. I believe it.

TELEPHONE, n. An invention of the devil which abrogates some of the advantages of making a disagreeable person keep his distance.

TELESCOPE, n. A device having a relation to the eye similar to that of the telephone to the ear, enabling distant objects to plague us with a multitude of needless details. Luckily it is unprovided with a bell summoning us to the sacrifice.

The discovery of the telephone has made us acquainted with many strange phenomena. It has enabled us, amongst other things, to establish beyond a doubt the fact that electric currents actually traverse the earth's crust. The theory that the earth acts as a great reservoir for electricity may be placed in the physicist's waste-paper basket, with phlogiston, the materiality of light, and other old-time hypotheses.

The relative importance of the white and gray matter is often misunderstood. Were it not for the manifold connection of the nerve cells in the cortex by the tens of millions of fibres which make up the under-estimated white matter, such a brain would be useless as a telephone or telegraph station with all the interconnecting wires destroyed.

Address to the American Association for the Advancement of Science in Philadelphia (28 Dec 1904), as quoted in 'Americans of Future Will Have Best Brains', New York Times (29 Dec 1904), 6.

There may be a golden ignorance. If Professor Bell had known how difficult a task he was attempting, he would never have given us the telephone.

Watson, if I can get a mechanism which will make a current of electricity vary in its intensity, as the air varies in density when a sound is passing through it, I can telegraph any sound, even the sound of speech.

We know enough to be sure that the scientific achievements of the next fifty years will be far greater, more rapid, and more surprising, than those we have already experienced.  Wireless telephones and television, following naturally upon the their present path of development, would enable their owner to connect up to any room similarly equipped and hear and take part in the conversation as well as if he put his head in through the window.

We would never get away from it. ... Its bad enough as it is, but with the wireless telephone one could be called up at the opera, in church, in our beds. Where could one be free from interruption?
[Prediction about the cell phone made over a century ago.]