Wenn sich fĂĽr ein neues Fossil kein, auf eigenthĂĽmliche Eigenschaften desselben hinweisender, Name auffinden lassen Will; als in welchem Falle ich mich bei dem gegenwĂ¤rtigen zu befinden gestehe; so halte ich es fĂĽr besser, eine solche Benennung auszuwĂ¤hlen, die an sich gar nichts sagt, und folglich auch zu keinen unrichtigen Begriffen Anlass geben kann. Diesem zufolge will ich den Namen fĂĽr die gegenwĂ¤rtige metallische Substanz, gleichergestalt wie bei dem Uranium geschehen, aus der Mythologie, und zwar von den UrsĂ¶hnen der Erde, den Titanen, entlehnen, und benenne also dieses neue Metallgeschlecht: Titanium.
Wherefore no name can be found for a new fossil [element] which indicates its peculiar and characteristic properties (in which position I find myself at present), I think it is best to choose such a denomination as means nothing of itself and thus can give no rise to any erroneous ideas. In consequence of this, as I did in the case of Uranium, I shall borrow the name for this metallic substance from mythology, and in particular from the Titans, the first sons of the earth. I therefore call this metallic genus TITANIUM.

Martin Heinrich Klaproth. Original German edition, BeitrĂ¤ge Zur Chemischen Kenntniss Der MineralkĂ¶rper (1795), Vol. 1 , 244. English edition, translator not named, Analytical Essays Towards Promoting the Chemical Knowledge of Mineral Substances (1801), Vol. 1, 210. Klaproth's use of the term fossil associates his knowledge of the metal as from ore samples dug out of a mine.

But as the wilderness areas are progressively exploited or â€śimproveâ€ť, as the jeeps and bulldozers of uranium prospectors scar up the deserts and the roads are cut into the alpine timberlands, and as the remnants of the unspoiled and natural world are progressively eroded, every such loss is a little death in me. In us.

For many centuries chemists labored to change lead into precious gold, and eventually found that precious uranium turned to lead without any human effort at all.

I will insist particularly upon the following fact, which seems to me quite important and beyond the phenomena which one could expect to observe: The same [double sulfate of uranium and potassium] crystalline crusts, arranged the same way [as reported to the French academy on 24 Feb 1896] with respect to the photographic plates, in the same conditions and through the same screens, but sheltered from the excitation of incident rays and kept in darkness, still produce the same photographic images â€¦ [when kept from 26 Feb 1896] in the darkness of a bureau drawer. â€¦ I developed the photographic plates on the 1st of March, expecting to find the images very weak. Instead the silhouettes appeared with great intensity.
It is important to observe that it appears this phenomenon must not be attributed to the luminous radiation emitted by phosphorescence â€¦ One hypothesis which presents itself to the mind naturally enough would be to suppose that these rays, whose effects have a great similarity to the effects produced by the rays studied by M. Lenard and M. RĂ¶ntgen, are invisible rays â€¦
[Having eliminated phosphorescence as a cause, he has further revealed the effect of the as yet unknown radioactivity.] 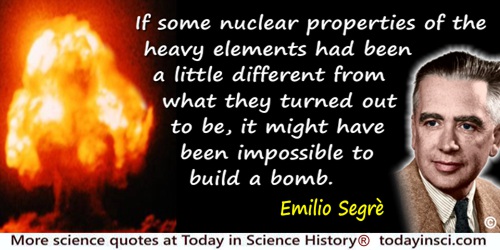 If some nuclear properties of the heavy elements had been a little different from what they turned out to be, it might have been impossible to build a bomb.

In the discussion of the. energies involved in the deformation of nuclei, the concept of surface tension of nuclear matter has been used and its value had been estimated from simple considerations regarding nuclear forces. It must be remembered, however, that the surface tension of a charged droplet is diminished by its charge, and a rough estimate shows that the surface tension of nuclei, decreasing with increasing nuclear charge, may become zero for atomic numbers of the order of 100. It seems therefore possible that the uranium nucleus has only small stability of form, and may, after neutron capture, divide itself into two nuclei of roughly equal size (the precise ratio of sizes depending on liner structural features and perhaps partly on chance). These two nuclei will repel each other and should gain a total kinetic energy of c. 200 Mev., as calculated from nuclear radius and charge. This amount of energy may actually be expected to be available from the difference in packing fraction between uranium and the elements in the middle of the periodic system. The whole 'fission' process can thus be described in an essentially classical way, without having to consider quantum-mechanical 'tunnel effects', which would actually be extremely small, on account of the large masses involved.
[Co-author with Otto Robert Frisch]

My experiments proved that the radiation of uranium compounds ... is an atomic property of the element of uranium. Its intensity is proportional to the quantity of uranium contained in the compound, and depends neither on conditions of chemical combination, nor on external circumstances, such as light or temperature.
... The radiation of thorium has an intensity of the same order as that of uranium, and is, as in the case of uranium, an atomic property of the element.
It was necessary at this point to find a new term to define this new property of matter manifested by the elements of uranium and thorium. I proposed the word radioactivity which has since become generally adopted; the radioactive elements have been called radio elements.

O. Hahn and F. Strassmann have discovered a new type of nuclear reaction, the splitting into two smaller nuclei of the nuclei of uranium and thorium under neutron bombardment. Thus they demonstrated the production of nuclei of barium, lanthanum, strontium, yttrium, and, more recently, of xenon and caesium. It can be shown by simple considerations that this type of nuclear reaction may be described in an essentially classical way like the fission of a liquid drop, and that the fission products must fly apart with kinetic energies of the order of hundred million electron-volts each.

Qualified scientists in Washington believe that the atom-blasting of Japan is the start toward heating plants the size of telephone booths for great factories, and motor-car trips of 1,000 hours on one gram of fuel. One expert estimated that with a few grams of uranium it might be possible to power the Queen Mary from Europe to the U.S. and back again. One of Americaâ€™s leading scientists, Doctor Vollrath, said that the new discovery brings manâ€™s attempt to reach the moon within bounds of possibility.

Some recent work by E. Fermi and L. Szilard, which has been communicated to me in manuscript, leads me to expect that the element uranium may be turned into a new and important source of energy in the immediate future. Certain aspects of the situation seem to call for watchfulness and, if necessary, quick action on the part of the Administration. â€¦
In the course of the last four months it has been made probable â€¦ that it may become possible to set up nuclear chain reactions in a large mass of uranium, by which vast amounts of power and large quantities of new radium-like elements would be generated. Now it appears almost certain that this could be achieved in the immediate future.
This new phenomenon would also lead to the construction of bombs, and it is conceivableâ€”though much less certainâ€”that extremely powerful bombs of a new type may thus be constructed. A single bomb of this type, carried by boat or exploded in a port, might well destroy the whole port altogether with some of the surrounding territory. However, such bombs might well prove to be too heavy for transportation by air.

Thus the radio elements formed strange and cruel families in which each member was created by spontaneous transformation of the mother substance: radium was a “descendant” of uranium, polonium a descendant of radium.

Translation of title of painting, 'Idilio atĂłmico y urĂˇnico melancĂłlico' (1945), in which Dali painted a surrealistic interpretation of his reaction to news that atomic bombs had been dropped (Aug 1945) on Japan.

We have been forced to admit for the first time in history not only the possibility of the fact of the growth and decay of the elements of matter. With radium and with uranium we do not see anything but the decay. And yet, somewhere, somehow, it is almost certain that these elements must be continuously forming. They are probably being put together now in the laboratory of the stars. ... Can we ever learn to control the process. Why not? Only research can tell.

While the [strong] force has mastery over the little nuclei of light atoms, at uranium, with a couple of hundred particles packed into the nucleus, it is losing control, and the nucleus tends to fall apart. Whether or not it does so in a controlled way determines the level of social benevolance of the outcome.

Originating the names for these two types of radiation. In 'Uranium Radiation and the Electrical Conduction Produced by It', Philosophical Magazine (1899), 47, 116.