As the nineteenth century drew to a close, scientists could reflect with satisfaction that they had pinned down most of the mysteries of the physical world: electricity, magnetism, gases, optics, acoustics, kinetics and statistical mechanics ... all had fallen into order before the. They had discovered the X ray, the cathode ray, the electron, and radioactivity, invented the ohm, the watt, the Kelvin, the joule, the amp, and the little erg.

A Short History of Nearly Everything. In Clifford A. Pickover, Archimedes to Hawking: Laws of Science and the Great Minds Behind Them (2008), 172.

Engineering is the science of economy, of conserving the energy, kinetic and potential, provided and stored up by nature for the use of man. It is the business of engineering to utilize this energy to the best advantage, so that there may be the least possible waste.

(1908). Quoted, without source, in Appendix A, 'Some Definitions of Engineering' in Theodore Jesse Hoover and John Charles Lounsbury Fish, The Engineering Profession (1941), 463.

I am now convinced that we have recently become possessed of experimental evidence of the discrete or grained nature of matter, which the atomic hypothesis sought in vain for hundreds and thousands of years. The isolation and counting of gaseous ions, on the one hand, which have crowned with success the long and brilliant researches of J.J. Thomson, and, on the other, agreement of the Brownian movement with the requirements of the kinetic hypothesis, established by many investigators and most conclusively by J. Perrin, justify the most cautious scientist in now speaking of the experimental proof of the atomic nature of matter, The atomic hypothesis is thus raised to the position of a scientifically well-founded theory, and can claim a place in a text-book intended for use as an introduction to the present state of our knowledge of General Chemistry.

I think a strong claim can be made that the process of scientific discovery may be regarded as a form of art. This is best seen in the theoretical aspects of Physical Science. The mathematical theorist builds up on certain assumptions and according to well understood logical rules, step by step, a stately edifice, while his imaginative power brings out clearly the hidden relations between its parts. A well constructed theory is in some respects undoubtedly an artistic production. A fine example is the famous Kinetic Theory of Maxwell. ... The theory of relativity by Einstein, quite apart from any question of its validity, cannot but be regarded as a magnificent work of art.
Responding to the toast, 'Science!' at the Royal Academy of the Arts in 1932.)

In the discussion of the. energies involved in the deformation of nuclei, the concept of surface tension of nuclear matter has been used and its value had been estimated from simple considerations regarding nuclear forces. It must be remembered, however, that the surface tension of a charged droplet is diminished by its charge, and a rough estimate shows that the surface tension of nuclei, decreasing with increasing nuclear charge, may become zero for atomic numbers of the order of 100. It seems therefore possible that the uranium nucleus has only small stability of form, and may, after neutron capture, divide itself into two nuclei of roughly equal size (the precise ratio of sizes depending on liner structural features and perhaps partly on chance). These two nuclei will repel each other and should gain a total kinetic energy of c. 200 Mev., as calculated from nuclear radius and charge. This amount of energy may actually be expected to be available from the difference in packing fraction between uranium and the elements in the middle of the periodic system. The whole 'fission' process can thus be described in an essentially classical way, without having to consider quantum-mechanical 'tunnel effects', which would actually be extremely small, on account of the large masses involved.
[Co-author with Otto Robert Frisch]

Nobody, I suppose, could devote many years to the study of chemical kinetics without being deeply conscious of the fascination of time and change: this is something that goes outside science into poetry; but science, subject to the rigid necessity of always seeking closer approximations to the truth, itself contains many poetical elements.

O. Hahn and F. Strassmann have discovered a new type of nuclear reaction, the splitting into two smaller nuclei of the nuclei of uranium and thorium under neutron bombardment. Thus they demonstrated the production of nuclei of barium, lanthanum, strontium, yttrium, and, more recently, of xenon and caesium. It can be shown by simple considerations that this type of nuclear reaction may be described in an essentially classical way like the fission of a liquid drop, and that the fission products must fly apart with kinetic energies of the order of hundred million electron-volts each.

The kinetic concept of motion in classical theory will have to undergo profound modifications. (That is why I also avoided the term orbit in my paper throughout.)  We must not bind the atoms in the chains of our prejudicesto which, in my opinion, also belongs the assumption that electron orbits exist in the sense of ordinary mechanicsbut we must, on the contrary, adapt our concepts to experience.

The results have exhibited one striking feature which has been frequently emphasized, namely that at high pressures all twelve liquids become more nearly like each other. This suggests that it might be useful in developing a theory of liquids to arbitrarily construct a 'perfect liquid' and to discuss its properties. Certainly the conception of a 'perfect gas' has been of great service in the kinetic theory of gases; and the reason is that all actual gases approximate closely to the 'perfect gas.' In the same way, at high pressures all liquids approximate to one and the same thing, which may be called by analogy the 'perfect liquid.' It seems to offer at least a promising line of attack to discuss the properties of this 'perfect liquid,' and then to invent the simplest possible mechanism to explain them. 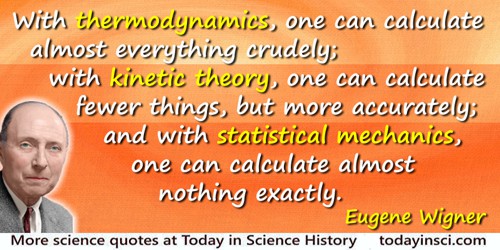