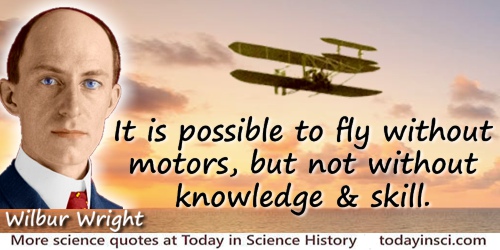 'RĂ©flexions sur la puissance motrice du feu' (1824) translated by R.H. Thurston in Reflections on the Motive Power of Fire, and on Machines Fitted to Develop that Power (1890), 38.

Engineers at General Motors have developed a revolutionary new engine whose only function is to lubricate itself.

Facts do not â€śspeak for themselvesâ€ť; they are read in the light of a theory. Creative thought, in science as much as in the arts, is the motor of changing opinion.

In Perspectives in Biological Medicine (1985).

I will build a motor car for the great multitude â€¦ constructed of the best materials, by the best men to be hired, after the simplest designs that modern engineering can devise â€¦ so low in price that no man making a good salary will be unable to own oneâ€”and enjoy with his family the blessing of pleasure in Godâ€™s great open spaces.

In the vast cosmical changes, the universal life comes and goes in unknown quantities ... sowing an animalcule here, crumbling a star there, oscillating and winding, ... entangling, from the highest to the lowest, all activities in the obscurity of a dizzying mechanism, hanging the flight of an insect upon the movement of the earth... Enormous gearing, whose first motor is the gnat, and whose last wheel is the zodiac.

It is possible to fly without motors, but not without knowledge & skill.

Muscles are in a most intimate and peculiar sense the organs of the will. They have built all the roads, cities and machines in the world, written all the books, spoken all the words, and, in fact done everything that man has accomplished with matter. Character might be a sense defined as a plexus of motor habits.

Qualified scientists in Washington believe that the atom-blasting of Japan is the start toward heating plants the size of telephone booths for great factories, and motor-car trips of 1,000 hours on one gram of fuel. One expert estimated that with a few grams of uranium it might be possible to power the Queen Mary from Europe to the U.S. and back again. One of Americaâ€™s leading scientists, Doctor Vollrath, said that the new discovery brings manâ€™s attempt to reach the moon within bounds of possibility.

Science affects the average man and woman in two ways already. He or she benefits by its application driving a motor-car or omnibus instead of a horse-drawn vehicle, being treated for disease by a doctor or surgeon rather than a witch, and being killed with an automatic pistol or shell in place of a dagger or a battle-axe.

Telegram (17 Dec 1903) to his father, Bishop Wright, about the first flight in an airplane, at Kitty Hawk, N.C. As quoted in Heinz Gartmann, Rings Around the World: Manâ€™s Progress From Steam Engine to Satellite (1959), 78.

The brain seems a thoroughfare for nerve-action passing its way to the motor animal. It has been remarked that Life's aim is an act not a thought. To-day the dictum must be modified to admit that, often, to refrain from an act is no less an act than to commit one, because inhibition is coequally with excitation a nervous activity.

The inhibitory nerves are of as fundamental importance in the economy of the body as the motor nerves. No evidence exists that the same nerve fibre is sometimes capable of acting as a motor nerve, sometimes as a nerve of inhibition, but on the contrary the latter nerves form a separate and complete nervous system subject to as definite anatomical and histological laws as the former.

'On the Structure, Distribution and Function of the Nerves which Innervate the Visceral and Vascular Systems', The Journal of Physiology, 1886, 7, 40.

The role of inhibition in the working of the central nervous system has proved to be more and more extensive and more and more fundamental as experiment has advanced in examining it. Reflex inhibition can no longer be regarded merely as a factor specially developed for dealing with the antagonism of opponent muscles acting at various hinge-joints. Its role as a coordinative factor comprises that, and goes beyond that. In the working of the central nervous machinery inhibition seems as ubiquitous and as frequent as is excitation itself. The whole quantitative grading of the operations of the spinal cord and brain appears to rest upon mutual interaction between the two central processes 'excitation' and 'inhibition', the one no less important than the other. For example, no operation can be more important as a basis of coordination for a motor act than adjustment of the quantity of contraction, e.g. of the number of motor units employed and the intensity of their individual tetanic activity. This now appears as the outcome of nice co-adjustment of excitation and inhibition upon each of all the individual units which cooperate in the act.

'Correlation of Reflexes and the Principle of the Common Path', Report of the Seventy-Fourth Meeting of the British Association for the Advancement of Science (1904), 730.

War and the steam engine joined forces and forged what was to become one of the most delicate of concepts. Sadi Carnot â€¦ formed the opinion that one cause of Franceâ€™s defeat had been her industrial inferiority. â€¦ Carnot saw steam power as a universal motor. â€¦ Carnot was a visionary and sharp analyst of what was needed to improve the steam engine. â€¦ Carnotâ€™s work â€¦ laid the foundations of [thermodynamics].

When I was research head of General Motors and wanted a problem solved, Iâ€™d place a table outside the meeting room with a sign: â€śLeave slide rules here.â€ť If I didnâ€™t do that, I'd find someone reaching for his slide rule. Then heâ€™d be on his feet saying, â€śBoss, you canâ€™t do it.â€ť

While electric railroading is perhaps the most important branch of electrical engineering, at least as regards commercial importance, considering the amount capital invested therein, nevertheless it is a remarkable fact that while most other branches of electrical engineering had been developed to a very high degree of perfection, even a few years ago theoretical investigation of electric railroading was still conspicuous by its almost entire absence.
All the work was done by some kind of empirical experimenting, that is, some kind of motor was fitted up with some gearing or some sort of railway car, and then run, and if the motor burned out frequently it was replaced with a larger motor, and if it did not burn out, a trailer was put on the car, and perhaps a second trailer, until the increase of the expense account in burn-outs of the motors balanced the increased carrying capacity of the train.

'The Electric Railway', Transactions of the American Institute of Electrical Engineers (1902), 125.

Yet is it possible in terms of the motion of atoms to explain how men can invent an electric motor, or design and build a great cathedral? If such achievements represent anything more than the requirements of physical law, it means that science must investigate the additional controlling factors, whatever they may be, in order that the world of nature may be adequately understood. For a science which describes only the motions of inanimate things but fails to include the actions of living organisms cannot claim universality.

â€¦so slow is moral progress. True, we have the bicycle, the motor-car, the dirigible airship and other marvellous means of breaking our bones; but our morality is not one rung the higher for it all. One would even say that, the farther we proceed in our conquest of matter, the more our morality recedes. The most advanced of our inventions consists in bringing men down with grapeshot and explosives with the swiftness of the reaper mowing the corn.