All living organisms are but leaves on the same tree of life. The various functions of plants and animals and their specialized organs are manifestations of the same living matter. This adapts itself to different jobs and circumstances, but operates on the same basic principles. Muscle contraction is only one of these adaptations. In principle it would not matter whether we studied nerve, kidney or muscle to understand the basic principles of life. In practice, however, it matters a great deal.

An induction shock results in a contraction or fails to do so according to its strength; if it does so at all, it produces in the muscle at that time the maximal contraction that can result from stimuli of any strength.

Anyone informed that the universe is expanding and contracting in pulsations of eighty billion years has a right to ask. What's in it for me?

Compounds of gaseous substances with each other are always formed in very simple ratios, so that representing one of the terms by unity, the other is 1, 2, or at most 3 ... The apparent contraction of volume suffered by gas on combination is also very simply related to the volume of one of them.

Describing laughter: The sound is produced by a deep inspiration followed by short, interrupted, spasmodic contractions of the chest, and especially the diaphragm... the mouth is open more or less widely, with the corners drawn much backwards, as well as a little upwards; and the upper lip is somewhat raised.

In man, then, let us take the amount that is extruded by the individual beats, and that cannot return into the heart because of the barrier set in its way by the valves, as half an ounce, or three drachms, or at least one drachm. In half an hour the heart makes over a thousand beats; indeed, in some individuals, and on occasion, two, three, or four thousand. If you multiply the drachms per beat by the number of beats you will see that in half an hour either a thousand times three drachms or times two drachms, or five hundred ounces, or other such proportionate quantity of blood has been passed through the heart into the arteries, that is, in all cases blood in greater amount than can be found in the whole of the body. Similarly in the sheep or the dog. Let us take it that one scruple passes in a single contraction of the heart; then in half an hour a thousand scruples, or three and a half pounds of blood, do so. In a body of this size, as I have found in the sheep, there is often not more than four pounds of blood.
In the above sort of way, by calculating the amount of blood transmitted [at each heart beat] and by making a count of the beats, let us convince ourselves that the whole amount of the blood mass goes through the heart from the veins to the arteries and similarly makes the pulmonary transit.
Even if this may take more than half an hour or an hour or a day for its accomplishment, it does nevertheless show that the beat of the heart is continuously driving through that organ more blood than the ingested food can supply, or all the veins together at any time contain.

One of my inventions was a large thermometer made of an iron rod,  The expansion and contraction of this rod was multiplied by a series of levers  so that the slightest change in the length of the rod was instantly shown on a dial about three feet wide multiplied about thirty-two thousand times. The zero-point was gained by packing the rod in wet snow. The scale was so large that  the temperature read while we were ploughing in the field below the house.

Since the stomach gives no obvious external sign of its workings, investigators of gastric movements have hitherto been obliged to confine their studies to pathological subjects or to animals subjected to serious operative interference. Observations made under these necessarily abnormal conditions have yielded a literature which is full of conflicting statements and uncertain results. The only sure conclusion to be drawn from this material is that when the stomach receives food, obscure peristaltic contractions are set going, which in some way churn the food to a liquid chyme and force it into the intestines. How imperfectly this describes the real workings of the stomach will appear from the following account of the actions of the organ studied by a new method. The mixing of a small quantity of subnitrate of bismuth with the food allows not only the contractions of the gastric wall, but also the movements of the gastric contents to be seen with the Röntgen rays in the uninjured animal during normal digestion.

The blood in the animal body is impelled in a circle and is in a state of ceaseless motion  and that it is the sole and only end of the motion and contraction of the heart. 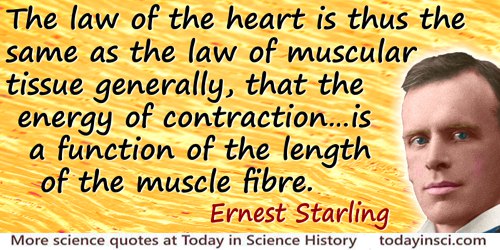 The law of the heart is thus the same as the law of muscular tissue generally, that the energy of contraction, however measured, is a function of the length of the muscle fibre.

The role of inhibition in the working of the central nervous system has proved to be more and more extensive and more and more fundamental as experiment has advanced in examining it. Reflex inhibition can no longer be regarded merely as a factor specially developed for dealing with the antagonism of opponent muscles acting at various hinge-joints. Its role as a coordinative factor comprises that, and goes beyond that. In the working of the central nervous machinery inhibition seems as ubiquitous and as frequent as is excitation itself. The whole quantitative grading of the operations of the spinal cord and brain appears to rest upon mutual interaction between the two central processes 'excitation' and 'inhibition', the one no less important than the other. For example, no operation can be more important as a basis of coordination for a motor act than adjustment of the quantity of contraction, e.g. of the number of motor units employed and the intensity of their individual tetanic activity. This now appears as the outcome of nice co-adjustment of excitation and inhibition upon each of all the individual units which cooperate in the act.

[1.] And first I suppose that there is diffused through all places an aethereal substance capable of contraction & dilatation, strongly elastick, & in a word, much like air in all respects, but far more subtile.
2. I suppose this aether pervades all gross bodies, but yet so as to stand rarer in their pores then in free spaces, & so much ye rarer as their pores are less ...
3. I suppose ye rarer aether within bodies & ye denser without them, not to be terminated in a mathematical superficies, but to grow gradually into one another.