Question: A hollow indiarubber ball full of air is suspended on one arm of a balance and weighed in air. The whole is then covered by the receiver of an air pump. Explain what will happen as the air in the receiver is exhausted.
Answer: The ball would expand and entirely fill the vessell, driving out all before it. The balance being of greater density than the rest would be the last to go, but in the end its inertia would be overcome and all would be expelled, and there would be a perfect vacuum. The ball would then burst, but you would not be aware of the fact on account of the loudness of a sound varying with the density of the place in which it is generated, and not on that in which it is heard.

Genuine student answer* to an Acoustics, Light and Heat paper (1880), Science and Art Department, South Kensington, London, collected by Prof. Oliver Lodge. Quoted in Henry B. Wheatley, Literary Blunders (1893), 181, Question 21. (*From a collection in which Answers are not given verbatim et literatim, and some instances may combine several students' blunders.)

A chemical compound once formed would persist for ever, if no alteration took place in surrounding conditions. But to the student of Life the aspect of nature is reversed. Here, incessant, and, so far as we know, spontaneous change is the rule, rest the exceptionthe anomaly to be accounted for. Living things have no inertia and tend to no equilibrium.

Although a science fair can seem like a big pain it can help you understand important scientific principles, such as Newtons First Law of Inertia, which states: A body at rest will remain at rest until 8:45 p.m. the night before the science fair project is due, at which point the body will come rushing to the bodys parents, who are already in their pajamas, and shout, I JUST REMEMBERED THE SCIENCE FAIR IS TOMORROW AND WE GOTTA GO TO THE STORE RIGHT NOW!

Any opinion as to the form in which the energy of gravitation exists in space is of great importance, and whoever can make his opinion probable will have, made an enormous stride in physical speculation. The apparent universality of gravitation, and the equality of its effects on matter of all kinds are most remarkable facts, hitherto without exception; but they are purely experimental facts, liable to be corrected by a single observed exception. We cannot conceive of matter with negative inertia or mass; but we see no way of accounting for the proportionality of gravitation to mass by any legitimate method of demonstration. If we can see the tails of comets fly off in the direction opposed to the sun with an accelerated velocity, and if we believe these tails to be matter and not optical illusions or mere tracks of vibrating disturbance, then we must admit a force in that direction, and we may establish that it is caused by the sun if it always depends upon his position and distance.

But when we face the great questions about gravitation Does it require time? Is it polar to the 'outside of the universe' or to anything? Has it any reference to electricity? or does it stand on the very foundation of mattermass or inertia? then we feel the need of tests, whether they be comets or nebulae or laboratory experiments or bold questions as to the truth of received opinions.

Discontent is inertia on a strike.

I shall explain a System of the World differing in many particulars from any yet known, answering in all things to the common Rules of Mechanical Motions: This depends upon three Suppositions. First, That all Clestial Bodies whatsoever, have an attraction or gravitating power towards their own Centers, whereby they attract not only their own parts, and keep them from flying from them, as we may observe the Earth to do, but that they do also attract all the other Clestial bodies that are within the sphere of their activity; and consequently that not only the Sun and Moon have an influence upon the body and motion the Earth, and the Earth upon them, but that Mercury also Venus, Mars, Saturn and Jupiter by their attractive powers, have a considerable influence upon its motion in the same manner the corresponding attractive power of the Earth hath a considerable influence upon every one of their motions also. The second supposition is this, That all bodies whatsoever that are put into a direct and simple motion, will continue to move forward in a streight line, till they are by some other effectual powers deflected and bent into a Motion, describing a Circle, Ellipse, or some other more compounded Curve Line. The third supposition is, That these attractive powers are so much the more powerful in operating, by how much the nearer the body wrought upon is to their own Centers. Now what these several degrees are I have not yet experimentally verified; but it is a notion, which if fully prosecuted as it ought to be, will mightily assist the Astronomer to reduce all the Clestial Motions to a certain rule, which I doubt will never be done true without it. He that understands the nature of the Circular Pendulum and Circular Motion, will easily understand the whole ground of this Principle, and will know where to find direction in Nature for the true stating thereof. This I only hint at present to such as have ability and opportunity of prosecuting this Inquiry, and are not wanting of Industry for observing and calculating, wishing heartily such may be found, having myself many other things in hand which I would first compleat and therefore cannot so well attend it. But this I durst promise the Undertaker, that he will find all the Great Motions of the World to be influenced by this Principle, and that the true understanding thereof will be the true perfection of Astronomy.

An Attempt to Prove the Motion of the Earth from Observations (1674), 27-8. Based on a Cutlerian Lecture delivered by Hooke at the Royal Society four years earlier. 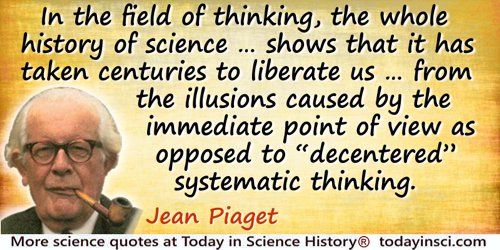 In the field of thinking, the whole history of science from geocentrism to the Copernican revolution, from the false absolutes of Aristotles physics to the relativity of Galileos principle of inertia and to Einsteins theory of relativity, shows that it has taken centuries to liberate us from the systematic errors, from the illusions caused by the immediate point of view as opposed to decentered systematic thinking.

Living things have no inertia, and tend to no equilibrium.

Science is a gamebut a game with reality, a game with sharpened knives  If a man cuts a picture carefully into 1000 pieces, you solve the puzzle when you reassemble the pieces into a picture; in the success or failure, both your intelligences compete. In the presentation of a scientific problem, the other player is the good Lord. He has not only set the problem but also has devised the rules of the gamebut they are not completely known, half of them are left for you to discover or to deduce. The experiment is the tempered blade which you wield with success against the spirits of darknessor which defeats you shamefully. The uncertainty is how many of the rules God himself has permanently ordained, and how many apparently are caused by your own mental inertia, while the solution generally becomes possible only through freedom from its limitations.

The inertia hardest to overcome is that of perfectly good seconds.

The main sources of mathematical invention seem to be within man rather than outside of him: his own inveterate and insatiable curiosity, his constant itching for intellectual adventure; and likewise the main obstacles to mathematical progress seem to be also within himself; his scandalous inertia and laziness, his fear of adventure, his need of conformity to old standards, and his obsession by mathematical ghosts.

When one considers in its length and in its breadth the importance of this question of the education of the nation's young, the broken lives, the defeated hopes, the national failures, which result from the frivolous inertia with which it is treated, it is difficult to restrain within oneself a savage rage. In the conditions of modern life the rule is absolute, the race which does not value trained intelligence is doomed. Not all your heroism, not all your social charm, not all your wit, not all your victories on land or at sea, can move back the finger of fate. To-day we maintain ourselves. To-morrow science will have moved forward yet one more step, and there will be no appeal from the judgment which will then be pronounced on the uneducated.