A drop from the nose of Fleming, who had a cold, fell onto an agar plate where large yellow colonies of a contaminant had grown, and lysosyme was discovered. He made this important discovery because when he saw that the colonies of the contaminant were fading, his mind went straight to the right cause of the phenomenon he was observing—that the drop from his nose contained a lytic substance. And also immediately, he thought that this substance might be present in many secretions and tissues of the body. And he found this was so—the substance was in tears, saliva, leucocytes, skin, fingernails, mother's milk—thus very widely distributed in amounts and also in plants.

As I am writing, another illustration of ye generation of hills proposed above comes into my mind. Milk is as uniform a liquor as ye chaos was. If beer be poured into it & ye mixture let stand till it be dry, the surface of ye curdled substance will appear as rugged & mountanous as the Earth in any place.

Consider the hateful brew compounded with gleaming, deadly white lead whose fresh colour is like milk. Over the victims jaws and in the grooves of the gums is plastered an astringent froth, and the furrow of the tongue turns rough on either side, and the depth of the throat grows somewhat dry, and from the pernicious venom follows a dry retching and hawking, for this affliction is severe; meanwhile his spirit sickens and he is worn out with mortal suffering. His body too grows chill, while sometimes his eyes behold strange illusions or else he drowses; nor can he bestir his limbs as heretofore, and he succumbs to the overmastering fatigue.

Educated folk keep to one another's company too much, leaving other people much like milk skimmed of its cream.

Half the time of all medical men is wasted keeping life in human wrecks who have no more intelligible reason for hanging on than a cow has for giving milk.

I took a glass retort, capable of containing eight ounces of water, and distilled fuming spirit of nitre according to the usual method. In the beginning the acid passed over red, then it became colourless, and lastly again all red: no sooner did this happen, than I took away the receiver; and tied to the mouth of the retort a bladder emptied of air, which I had moistened in its inside with milk of lime lac calcis, (i.e. lime-water, containing more quicklime than water can dissolve) to prevent its being corroded by the acid. Then I continued the distillation, and the bladder gradually expanded. Here-upon I left every thing to cool, tied up the bladder, and took it off from the mouth of the retort. I filled a ten-ounce glass with this air and put a small burning candle into it; when immediately the candle burnt with a large flame, of so vivid a light that it dazzled the eyes. I mixed one part of this air with three parts of air, wherein fire would not burn; and this mixture afforded air, in every respect familiar to the common sort. Since this air is absolutely necessary for the generation of fire, and makes about one-third of our common air, I shall henceforth, for shortness sake call it empyreal air, [literally fire-air] the air which is unserviceable for the fiery phenomenon, and which makes abut two-thirds of common air, I shall for the future call foul air [literally corrupted air].

Its funny how worms can turn leaves into silk.
But funnier far is the cow:
She changes a field of green grass into milk
And not a professor knows how.

In Dorothy Caruso, Enrico Caruso: His Life and Death (1963), 42. Written for Michael Pupin, who made a similar statement in prose: Look at those animals and remember the greatest scientists in the world have never discovered how to make grass into milk.

Im saying that the leaders of the church have locked the sacred cow called science in the stable and they wont let anybody enter; they should open it immediately so that we can milk that cow in the name of humanity and thus find the truth.

Knowledge is a sacred cow, and my problem will be how we can milk her while keeping clear of her horns. 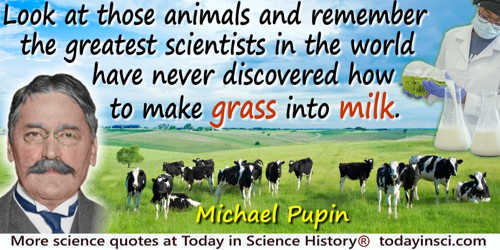 Look at those animals and remember the greatest scientists in the world have never discovered how to make grass into milk.

Man cannot live by milk alone. Love is an emotion that does not need to be bottle- or spoon-fed.

Neither cookery nor chymistry [has] been able to make milk out of grass.

One of the earliest questions asked by an intelligent child is: What is this made of? What is that made of? And the answer is generally more or less satisfactory. For example, if the question relates to butter, the reply may be, From cream. It may be explained, besides, that when cream is beaten up, or churned, the butter separates, leaving skim-milk behind. But the question has not been answered. The child may ask, Was the butter in the milk before it was churned? or has it been made out of the milk by the churning? Possibly the person to whom the question is addressed may know that the milk contained the butter in the state of fine globules, and that the process of churning breaks up the globules, and causes them to stick together. The original question has not really been answered; and indeed it is not an easy one to reply to. Precisely such questions suggested themselves to the people of old, and they led to many speculations.

Quiet this metal!
Let the manes put off their terror, let
them put off their aqueous bodies with fire.
Let them assume the milk-white bodies of agate.
Let them draw together the bones of the metal.

The effort to reconcile science and religion is almost always made, not by theologians, but by scientists unable to shake off altogether the piety absorbed with their mothers milk.

The growth curves of the famous Hopkins' rats are familiar to anyone who has ever opened a textbook of physiology. One recalls the proud ascendant curve of the milk-fed group which suddenly turns downwards as the milk supplement is removed, and the waning curve of the other group taking its sudden milk-assisted upward spring, until it passes its fellow now abruptly on the decline. 'Feeding experiments illustrating the importance of accessory factors in normal dietaries', Jour. Physiol., 1912, xliv, 425, ranks aesthetically beside the best stories of H. G. Wells.

The key to the sociobiology of mammals is milk.

The public buys its opinions as it buys its meat, or takes in its milk, on the principle that it is cheaper to do this than to keep a cow. So it is, but the milk is more likely to be watered.

There is no substitute for mothers milk.