A myth is, of course, not a fairy story. It is the presentation of facts belonging to one category in the idioms appropriate to another. To explode a myth is accordingly not to deny the facts but to re-allocate them.

Becoming serious is a grievous fault in hobbyists. It is an axiom that no hobby should either seek or need rational justification. To wish to do it is reason enough. To find reasons why it is useful or beneficial converts it at once from an avocation into an industrylowers it at once to the ignominious category of an 'exercise' undertaken for health, power, or profit. Lifting dumbbells is not a hobby. It is a confession of subservience, not an assertion of liberty.

Concerned to reconstruct past ideas, historians must approach the generation that held them as the anthropologist approaches an alien culture. They must, that is, be prepared at the start to find that natives speak a different language and map experience into different categories from those they themselves bring from home. And they must take as their object the discovery of those categories and the assimilation of the corresponding language.

Consider the eighth category, which deals with stones. Wilkins divides them into the following classifications: ordinary (flint, gravel, slate); intermediate (marble, amber, coral); precious (pearl, opal); transparent (amethyst, sapphire); and insoluble (coal, clay, and arsenic). The ninth category is almost as alarming as the eighth. It reveals that metals can be imperfect (vermilion, quicksilver); artificial (bronze, brass); recremental (filings, rust); and natural (gold, tin, copper). The whale appears in the sixteenth category: it is a viviparous, oblong fish. These ambiguities, redundances, and deficiencies recall those attributed by Dr. Franz Kuhn to a certain Chinese encyclopedia entitled Celestial Emporium of Benevolent Knowledge. On those remote pages it is written that animals are divided into (a) those that belong to the Emperor, (b) embalmed ones, (c) those that are trained, (d) suckling pigs, (e) mermaids, (f) fabulous ones, (g) stray dogs, (h) those that are included in this classification, (i) those that tremble as if they were mad, (j) innumerable ones, (k) those drawn with a very fine camel's hair brush, (l) others, (m) those that have just broken a flower vase, (n) those that resemble flies from a distance. 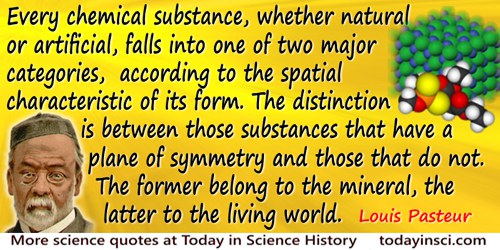 Every chemical substance, whether natural or artificial, falls into one of two major categories, according to the spatial characteristic of its form. The distinction is between those substances that have a plane of symmetry and those that do not. The former belong to the mineral, the latter to the living world.

In general I would be cautious against  plays of fancy and would not make way for their reception into scientific astronomy, which must have quite a different character. Laplaces cosmogenic hypotheses belong in that class. Indeed, I do not deny that I sometimes amuse myself in a similar manner, only I would never publish the stuff. My thoughts about the inhabitants of celestial bodies, for example, belong in that category. For my part, I am (contrary to the usual opinion) convinced  that the larger the cosmic body, the smaller are the inhabitants and other products. For example, on the sun trees, which in the same ratio would be larger than ours, as the sun exceeds the earth in magnitude, would not be able to exist, for on account of the much greater weight on the surface of the sun, all branches would break themselves off, in so far as the materials are not of a sort entirely heterogeneous with those on earth.

It [science] must be amoral by its very nature: the minute it begins separating facts into the two categories of good ones and bad ones it ceases to be science and becomes a mere nuisance, like theology.

No category of sciences exists to which one could give the name of applied sciences. There are science and the applications of science, linked together as fruit is to the tree that has borne it.
Il nexiste pas une catégorie de sciences auxquelles on puisse donner le nom de sciences appliquées. II y a la science et les applications de la science, liées entre elles comme le fruit à larbre qui la porté.

Original French in 'La Science en france: Pourquoi la France na pas trouvé dhommes supérieurs au moment de péril', La Revue Scientifique de la France et de lÉtranger Revue des Cours Scientifique (22 Jul 1871), 2, No. 4, 74. Translation as given in Isaac Asimov and Jason A. Shulman (eds.), Isaac Asimovs Book of Science and Nature Quotations (1988), 322. Another translation gives: there does not exist a category of science to which one can give the name applied science. There are science and the applications of science, bound together as the fruit to the tree which bears it.

One evening at a Joint Summer Research Congerence in the early 1990s Nicholai Reshetikhin and I [David Yetter] button-holed Flato, and explained at length Shums coherence theorem and the role of categories in quantum knot invariants. Flato was persistently dismissive of categories as a mere language. I retired for the evening, leaving Reshetikhin and Flato to the discussion. At the next mornings session, Flato tapped me on the shoulder, and, giving a thumbs-up sign, whispered, Hey! Viva les categories! These new ones, the braided monoidal ones.

In David N. Yetter, Functorial Knot Theory: Categories of Tangles, Coherence, Categorical Deformations, and Topological Invariants (2001), 8. Yetter writes this personal anecdote is given as a narrative in his own words. Presumable the phrases in quotation marks are based on recollection when written years later.

The argument of the long view may be correct in some meaninglessly abstract sense, but it represents a fundamental mistake in categories and time scales. Our only legitimate long view extends to our children and our childrens childrens childrenhundreds or a few thousands of years down the road. If we let the slaughter continue, they will share a bleak world with rats, dogs, cockroaches, pigeons, and mosquitoes. A potential recovery millions of years later has no meaning at our appropriate scale.

The average scientist is good for at most one revolution. Even if he has the power to make one change in his category system and carry others along, success will make him a recognized leader, with little to gain from another revolution.

In An Introduction to General Systems Thinking (1975).

The mathematical intellectualism is henceforth a positive doctrine, but one that inverts the usual doctrines of positivism: in place of originating progress in order, dynamics in statics, its goal is to make logical order the product of intellectual progress. The science of the future is not enwombed, as Comte would have had it, as Kant had wished it, in the forms of the science already existing; the structure of these forms reveals an original dynamism whose onward sweep is prolonged by the synthetic generation of more and more complicated forms. No speculation on number considered as a category a priori enables one to account for the questions set by modern mathematics  space affirms only the possibility of applying to a multiplicity of any elements whatever, relations whose type the intellect does not undertake to determine in advance, but, on the contrary, it asserts their existence and nourishes their unlimited development.

There is no such thing as a special category of science called applied science; there is science and its applications, which are related to one another as the fruit is related to the tree that has borne it.

There is nothing opposed in Biometry and Mendelism. Your husband [W.F.R. Weldon] and I worked that out at Peppards [on the Chilterns] and you will see it referred in the Biometrika memoir. The Mendelian formula leads up to the ancestral law. What we fought against was the slovenliness in applying Mendel's categories and asserting that such formulae apply in cases when they did not.

We dissect nature along lines laid down by our native languages. The categories and types that we isolate from the world of phenomena we do not find there because they stare every observer in the face; on the contrary, the world is presented in a kaleidoscopic flux of impressions which has to be organized by our mindsand this means largely by the linguistic systems in our minds.