And who can doubt that it will lead to the worst disorders when minds created free by God are compelled to submit slavishly to an outside will? When we are told to deny our senses and subject them to the whim of others? When people devoid of whatsoever competence are made judges over experts and are granted authority to treat them as they please? These are the novelties which are apt to bring about the ruin of commonwealths and the subversion of the state.

In Galileos handwriting is his personal copy of Dialogue on the Great World Systems, x. As quoted in Edward Aloysius Pace and James Hugh Ryan, The New Scholasticism (1954),

During the long ages of class rule, which are just beginning to cease, only one form of sovereignty has been assigned to all menthat, namely, over all women. Upon these feeble and inferior companions all men were permitted to avenge the indignities they suffered from so many men to whom they were forced to submit.

Great spirits have always found violent opposition from mediocrities. The latter cannot understand it when a man does not thoughtlessly submit to hereditary prejudices but honestly and courageously uses his intelligence and fulfills the duty to express the results of his thoughts in clear form.

He [Sylvester] had one remarkable peculiarity. He seldom remembered theorems, propositions, etc., but had always to deduce them when he wished to use them. In this he was the very antithesis of Cayley, who was thoroughly conversant with everything that had been done in every branch of mathematics.
I remember once submitting to Sylvester some investigations that I had been engaged on, and he immediately denied my first statement, saying that such a proposition had never been heard of, let alone proved. To his astonishment, I showed him a paper of his own in which he had proved the proposition; in fact, I believe the object of his paper had been the very proof which was so strange to him.

As quoted by Florian Cajori, in Teaching and History of Mathematics in the United States (1890), 268.

It is only by the influence of individuals who can set an example, whom the masses recognize as their leaders, that they can be induced to submit to the labors and renunciations on which the existence of culture depends.

It is told of Faraday that he refused to be called a physicist; he very much disliked the new name as being too special and particular and insisted on the old one, philosopher, in all its spacious generality: we may suppose that this was his way of saying that he had not over-ridden the limiting conditions of class only to submit to the limitation of a profession.

It troubles me that we are so easily pressured by purveyors of technology into permitting so-called progress to alter our lives without attempting to control itas if technology were an irrepressible force of nature to which we must meekly submit.

Mathematics pursues its own course unrestrained, not indeed with an unbridled licence which submits to no laws, but rather with the freedom which is determined by its own nature and in conformity with its own being. 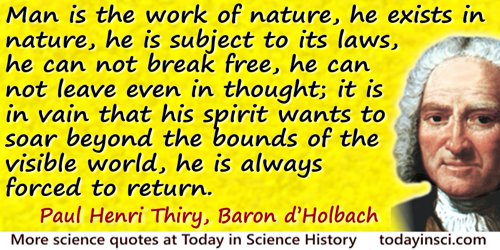 Men always fool themselves when they give up experience for systems born of the imagination. Man is the work of nature, he exists in nature, he is subject to its laws, he can not break free, he can not leave even in thought; it is in vain that his spirit wants to soar beyond the bounds of the visible world, he is always forced to return.

One wonders whether a generation that demands instant satisfaction of all its needs and instant solution of the worlds problems will produce anything of lasting value. Such a generation, even when equipped with the most modern technology, will be essentially primitive - it will stand in awe of nature, and submit to the tutelage of medicine men.

The great art consists in devising décisive experiments, leaving no place to the imagination of the observer. Imagination is needed to give wings to thought at the beginning of experimental investigations on any given subject. When, however, the time has come to conclude, and to interpret the facts derived from observations, imagination must submit to the factual results of the experiments.

The more man inquires into the laws which regulate the material universe, the more he is convinced that all its varied forms arise from the action of a few simple principles. These principles themselves converge, with accelerating force, towards some still more comprehensive law to which all matter seems to be submitted. Simple as that law may possibly be, it must be remembered that it is only one amongst an infinite number of simple laws: that each of these laws has consequences at least as extensive as the existing one, and therefore that the Creator who selected the present law must have foreseen the consequences of all other laws.

Thinking must never submit itself, neither to a dogma, nor to a party, nor to a passion, nor to an interest, nor to a preconceived idea, nor to whatever it may be, if not to facts themselves, because, for it, to submit would be to cease to be.

To-day we no longer beg of nature; we command her, because we have discovered certain of her secrets and shall discover others each day. We command her in the name of laws she can not challenge because they are hers; these laws we do not madly ask her to change, we are the first to submit to them. Nature can only be governed by obeying her.

Truth can only be found by the human intellect, exercised in perfect freedom, and trained to submit itself to the facts of nature. This is the essence of the Scientific Method, which is the exact opposite of the Theological Method. Science teaches men to think with absolute independence of all arbitrary authority, but to submit all their thoughts to the test of actual experiences of Nature. Christianity teaches them to think only according to its own foregone dogmatic conclusions, and to stick to these dogmatic conclusion in defiance of all possible experience.

We must not forget  that influence is not a simple, but on the contrary, a very complex, bilateral relation. We are not influenced by everything we read or learn. In one sense, and perhaps the deepest, we ourselves determine the influences we are submitting to; our intellectual ancestors are by no means given to, but are freely chosen by, us.