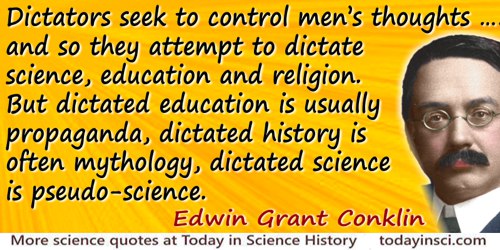 Dictators seek to control mens thoughts as well as their bodies and so they attempt to dictate science, education and religion. But dictated education is usually propaganda, dictated history is often mythology, dictated science is pseudo-science.

I hate science. It denies a mans responsibility for his own deeds, abolishes the brotherhood that springs from Gods fatherhood. It is a hectoring, dictating expertise, which makes the least lovable of the Church Fathers seem liberal by contrast. It is far easier for a Hitler or a Stalin to find a mock-scientific excuse for persecution than it was for Dominic to find a mock-Christian one.

I maintain there is much more wonder in science than in pseudoscience. And in addition, to whatever measure this term has any meaning, science has the additional virtue, and it is not an inconsiderable one, of being true.

Concluding remarks of keynote address at CSICOP conference, Pasadena, California (3 Apr 1987). Printed in 'The Burden of Skepticism', Skeptical Inquirer (1987), 12, No. 1. Collected in Kendrick Frazier (ed.), The Hundredth Monkey: And Other Paradigms of the Paranormal (1991), 9.

Inspect every piece of pseudoscience and you will find a security blanket, a thumb to suck, a skirt to hold. What does the scientist have to offer in exchange? Uncertainty! Insecurity! 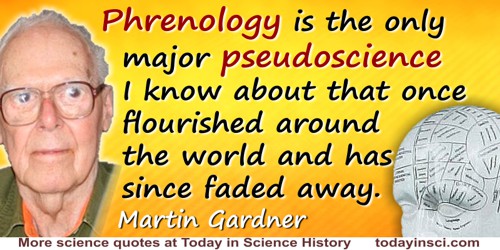 Phrenology is the only major pseudoscience I know about that once flourished around the world and has since faded away.

Science and mathematics [are] much more compelling and exciting than the doctrines of pseudoscience, whose practitioners were condemned as early as the fifth century B.C. by the Ionian philosopher Heraclitus as night walkers, magicians, priests of Bacchus, priestesses of the wine-vat, mystery-mongers. But science is more intricate and subtle, reveals a much richer universe, and powerfully evokes our sense of wonder. And it has the additional and important virtueto whatever extent the word has any meaningof being true. 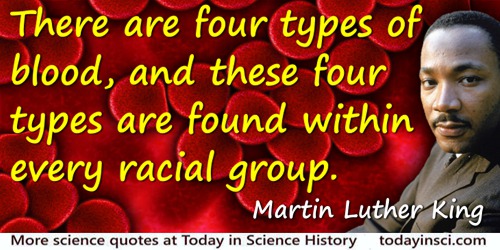 Segregationalists will even argue that God was the first segregationalist. Red birds and blue birds don't fly together, they contend.  They turn to some pseudo-scientific writing and argue that the Negros brain is smaller than the white mans brain. They do not know, or they refuse to know that the idea of an inferior or superior race has been refuted by the best evidence of the science of anthropology. Great anthropologists, like Ruth Benedict, Margaret Mead, and Melville J. Herskovits, agree that, although there may be inferior and superior individuals within all races, there is no superior or inferior race. And segregationalists refuse to acknowledge that there are four types of blood, and these four types are found within every racial group.

Tactics used by many practitioners of pseudoscience: make a large number of vaguely scientific arguments in the hope of making the desired conclusion seem inevitable. It is essential to recognize that a disconnected assemblage of weak arguments does not create a single, strong scientific argument.

The Catholic Church excommunicated Copernicans, the Communist Party persecuted Mendelians on the ground that their doctrines were pseudoscientific. The demarcation between science and pseudoscience is not merely a problem of armchair philosophy: it is of vital social and political relevance.

The wish to believe, even against evidence, fuels all the pseudosciences from astrology to creationism.

There are, and always have been, destructive pseudo-scientific notions linked to race and religion; these are the most widespread and damaging. Hopefully, educated people can succeed in shedding light into these areas of prejudice and ignorance, for as Voltaire once said: Men will commit atrocities as long as they believe absurdities.

From an article in a periodical of Miami-Dade Junior College by Bernard Sussman, 'Exclusive Interview with Martin Gardner', Southwind (Fall 1968), 3, No. 1, 7-11. As quoted and cited in Dana Richards, 'Martin Gardner: A Documentary', collected in Elwyn R. Berlekamp and Tom Rodgers (ed.) The Mathemagician and Pied Puzzler: A Collection in Tribute to Martin Gardner (1999), 11.

When it comes to scientific matters the ready talkers simply run riot. There are a lot of pseudo-scientists who with a little technical jargon to spatter through their talk are always getting in the limelight.  The less they know the surer they are about it.