Common sense is science exactly in so far as it fulfills the ideal of common sense; that is, sees facts as they are, or at any rate, without the distortion of prejudice, and reasons from them in accordance with the dictates of sound judgment. And science is simply common sense at its best, that is, rigidly accurate in observation, and merciless to fallacy in logic.

I believe  that we can still have a genre of scientific books suitable for and accessible alike to professionals and interested laypeople. The concepts of science, in all their richness and ambiguity, can be presented without any compromise, without any simplification counting as distortion, in language accessible to all intelligent people  I hope that this book can be read with profit both in seminars for graduate students andif the movie stinks and you forgot your sleeping pillson the businessmans special to Tokyo.

I experimented with all possible maneuversloops, somersaults and barrel rolls. I stood upside down on one finger and burst out laughing, a shrill, distorted laugh. Nothing I did altered the automatic rhythm of the air. Delivered from gravity and buoyancy, I flew around in space.
Describing his early test (1943) in the Mediterranean Sea of the Aqua-Lung he co-invented.

Men who have excessive faith in their theories or ideas are not only ill prepared for making discoveries; they also make very poor observations. Of necessity, they observe with a preconceived idea, and when they devise an experiment, they can see, in its results,only a confirmation of their theory. In this way they distort observation and often neglect very important facts because they do not further their aim.

From An Introduction to the Study of Experimental Medicine (1865), as translated by Henry Copley Greene (1957), 38.

My theory of electrical forces is that they are called into play in insulating media by slight electric displacements, which put certain small portions of the medium into a state of distortion which, being resisted by the elasticity of the medium, produces an electromotive force ... I suppose the elasticity of the sphere to react on the electrical matter surrounding it, and press it downwards.
From the determination by Kohlrausch and Weber of the numerical relation between the statical and magnetic effects of electricity, I have determined the elasticity of the medium in air, and assuming that it is the same with the luminiferous ether I have determined the velocity of propagation of transverse vibrations.
The result is
193088 miles per second
(deduced from electrical & magnetic experiments).
Fizeau has determined the velocity of light
= 193118 miles per second
by direct experiment.
This coincidence is not merely numerical. I worked out the formulae in the country, before seeing Webers [sic] number, which is in millimetres, and I think we have now strong reason to believe, whether my theory is a fact or not, that the luminiferous and the electromagnetic medium are one.

Our earth is very old, an old warrior that has lived through many battles. Nevertheless, the face of it is still changing, and science sees no certain limit of time for its stately evolution. Our solid earth, apparently so stable, inert, and finished, is changing, mobile, and still evolving. Its major quakings are largely the echoes of that divine far-off event, the building of our noble mountains. The lava floods and intriguing volcanoes tell us of the plasticity, mobility, of the deep interior of the globe. The slow coming and going of ancient shallow seas on the continental plateaus tell us of the rhythmic distortion of the deep interior-deep-seated flow and changes of volume. Mountain chains prove the earths solid crust itself to be mobile in high degree. And the secret of it allthe secret of the earthquake, the secret of the temple of fire, the secret of the ocean basin, the secret of the highlandis in the heart of the earth, forever invisible to human eyes. 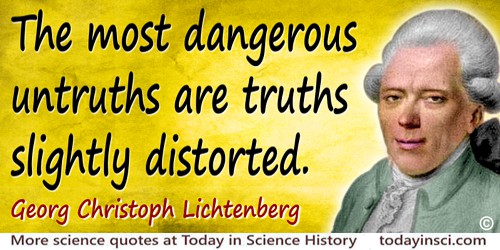 The most dangerous untruths are truths slightly distorted.

Aphorism 7 in Notebook H, as translated by R.J. Hollingdale in Aphorisms (1990).

Think of the image of the world in a convex mirror. ... A well-made convex mirror of moderate aperture represents the objects in front of it as apparently solid and in fixed positions behind its surface. But the images of the distant horizon and of the sun in the sky lie behind the mirror at a limited distance, equal to its focal length. Between these and the surface of the mirror are found the images of all the other objects before it, but the images are diminished and flattened in proportion to the distance of their objects from the mirror. ... Yet every straight line or plane in the outer world is represented by a straight line or plane in the image. The image of a man measuring with a rule a straight line from the mirror, would contract more and more the farther he went, but with his shrunken rule the man in the image would count out exactly the same results as in the outer world, all lines of sight in the mirror would be represented by straight lines of sight in the mirror. In short, I do not see how men in the mirror are to discover that their bodies are not rigid solids and their experiences good examples of the correctness of Euclidean axioms. But if they could look out upon our world as we look into theirs without overstepping the boundary, they must declare it to be a picture in a spherical mirror, and would speak of us just as we speak of them; and if two inhabitants of the different worlds could communicate with one another, neither, as far as I can see, would be able to convince the other that he had the true, the other the distorted, relation. Indeed I cannot see that such a question would have any meaning at all, so long as mechanical considerations are not mixed up with it.

We need another and a wiser and perhaps a more mystical concept of animals. Remote from universal nature, and living by complicated artifice, man in civilization surveys the creature through the glass of his knowledge and sees thereby a feather magnified and the whole image in distortion. We patronize them for their incompleteness, for their tragic fate of having taken form so far below ourselves. And therein we err, and greatly err. For the animal shall not be measured by man. In a world older and more complete than ours they move finished and complete, gifted with extensions of the senses we have lost or never attained, living by voices we shall never hear. They are not brethren, they are not underlings; they are other nations, caught with ourselves in the net of life and time, fellow prisoners of the splendour and travail of the earth.

You know something I could really do without? The Space Shuttle.  Its irresponsible. The last thing we should be doing is sending our grotesquely distorted DNA out into space.

I was reading an article about Mathematics. Perfectly pure mathematics. My own knowledge of mathematics stops at twelve times twelve, but I enjoyed that article immensely. I didnt understand a word of it; but facts, or what a man believes to be facts, are always delightful. That mathematical fellow believed in his facts. So do I. Get your facts first, andthe voice dies away to an almost inaudible dronethen you can distort em as much as you please.