All the scientist creates in a fact is the language in which he enunciates it. If he predicts a fact, he will employ this language, and for all those who can speak and understand it, his prediction is free from ambiguity. Moreover, this prediction once made, it evidently does not depend upon him whether it is fulfilled or not.

All women scientists should marry, rear children, cook, and clean in order to achieve fulfillment, to be a complete woman.

Quoted in The Chemical Educator, vol. 7, No. 2, in a book review of Eugene Straus, Rosalyn Yalow, Nobel Laureate: Her Life and Work in Medicine.

An understanding of the natural world and whats in it is a source of not only a great curiosity but great fulfilment.

And so the great truth, now a paradox, may become a commonplace, that man is greater than his surroundings, and that the production of a breed of men and women, even in our great cities, less prone to disease, and pain, more noble in aspect, more rational in habits, more exultant in the pure joy of living, is not only scientifically possible, but that even the partial fulfillment of this dream, if dream it be, is the most worthy object towards which the lover of his kind can devote the best energies of his life.

Common sense is science exactly in so far as it fulfills the ideal of common sense; that is, sees facts as they are, or at any rate, without the distortion of prejudice, and reasons from them in accordance with the dictates of sound judgment. And science is simply common sense at its best, that is, rigidly accurate in observation, and merciless to fallacy in logic. 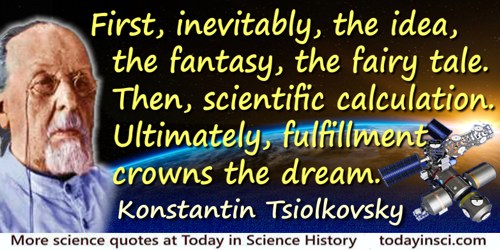 Geology is rapidly taking its place as an introduction to the higher history of man. If the author has sought to exalt a favorite science, it has been with the desire that manin whom geological history had its consummation, the prophecies of the successive ages their fulfilmentmight better comprehend his own nobility and the true purpose of his existence.

In science, each of us knows that what he has accomplished will be antiquated in ten, twenty, fifty years. That is the fate to which science is subjected; it is the very meaning of scientific work, to which it is devoted in a quite specific sense, as compared with other spheres of culture for which in general the same holds. Every scientific fulfilment raises new questions; it asks to be surpassed and outdated. Whoever wishes to serve science has to resign himself to this fact. Scientific works certainly can last as gratifications because of their artistic quality, or they may remain important as a means of training. Yet they will be surpassed scientificallylet that be repeatedfor it is our common fate and, more our common goal. We cannot work without hoping that others will advance further than we have. In principle, this progress goes on ad infinitum.

'Why Mathematics Grows', Journal of the History of Ideas (Jan-Mar 1965), 26, No. 1, 3. In Salomon Bochner and Robert Clifford Gunning (ed.) Collected Papers of Salomon Bochner (1992), Vol. 4, 191. Footnoted as restating about Mathematics what was written about Myth by Henri Frankfort, et al., in The Intellectual Adventures of Ancient Man (1946), 8.

My life has been a continuous fulfillment of dreams. It appears that everything I saw and did has a new, and perhaps, more significant meaning, every time I see it. The earth is good. It is a privilege to live thereon.

Science has fulfilled her function when she has ascertained and enunciated truth.

Society is a self-regulating mechanism for preventing the fulfilment of its members.

The adequate study of culture, our own and those on the opposite side of the globe, can press on to fulfillment only as we learn today from the humanities as well as from the sciences.

The helicopter approaches closer than any other [transport] to fulfillment of mankinds ancient dream of the flying horse and the magic carpet.

In The Story of the Winged-S: The Autobiography of Igor I. Sikorsky (2011). 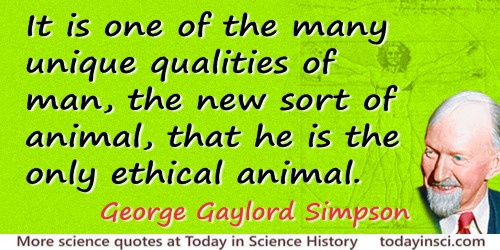 The meaning that we are seeking in evolution is its meaning to us, to man. The ethics of evolution must be human ethics. It is one of the many unique qualities of man, the new sort of animal, that he is the only ethical animal. The ethical need and its fulfillment are also products of evolution, but they have been produced in man alone.

The Meaning of Evolution: A Study of the History of Life and of its Significance for Man (1949), 309.

There is inherent in nature a hidden harmony that reflects itself in our minds under the image of simple mathematical laws. That then is the reason why events in nature are predictable by a combination of observation and mathematical analysis. Again and again in the history of physics this conviction, or should I say this dream, of harmony in nature has found fulfillments beyond our expectations.

There is nothing which Nature so clearly reveals, and upon which science so strongly insists, as the universal reign of law, absolute, universal, invariable law... Not one jot or tittle of the laws of Nature are unfulfilled. I do not believe it is possible to state this fact too strongly... Everything happens according to law, and, since law is the expression of Divine will, everything happens according to Divine will, i.e. is in some sense ordained, decreed.

This method is, to define as the number of a class the class of all classes similar to the given class. Membership of this class of classes (considered as a predicate) is a common property of all the similar classes and of no others; moreover every class of the set of similar classes has to the set of a relation which it has to nothing else, and which every class has to its own set. Thus the conditions are completely fulfilled by this class of classes, and it has the merit of being determinate when a class is given, and of being different for two classes which are not similar. This, then, is an irreproachable definition of the number of a class in purely logical terms.

[In] the realm of science,  what we have achieved will be obsolete in ten, twenty or fifty years. That is the fate, indeed, that is the very meaning of scientific work.  Every scientific fulfillment raises new questions and cries out to be surpassed and rendered obsolete. Everyone who wishes to serve science has to resign himself to this.