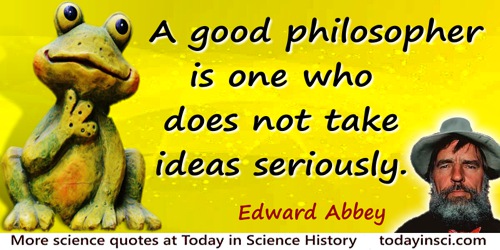 A good philosopher is one who does not take ideas seriously.

Anyone who doesnt take truth seriously in small matters cannot be trusted in large ones either.

I do not believe in freedom of the will. Schopenhauers words: Man can do what he wants, but he cannot will what he wills accompany me in all situations throughout my life and reconcile me with the actions of others even if they are rather painful to me. This awareness of the lack of freedom of will preserves me from taking too seriously myself and my fellow men as acting and deciding individuals and from losing my temper.

If we take quantum theory seriously as a picture of whats really going on, each measurement does more than disturb: it profoundly reshapes the very fabric of reality.

In human freedom in the philosophical sense I am definitely a disbeliever. Everybody acts not only under external compulsion but also in accordance with inner necessity. Schopenhauers saying, that a man can do as he will, but not will as he will, has been an inspiration to me since my youth up, and a continual consolation and unfailing well-spring of patience in the face of the hardships of life, my own and others. This feeling mercifully mitigates the sense of responsibility which so easily becomes paralysing, and it prevents us from taking ourselves and other people too seriously; it conduces to a view of life in which humour, above all, has its due place.

It seems to me that the idea of a personal God is an anthropological concept which I cannot take seriously. I also cannot imagine some will or goal outside the human sphere has been cited as a statement that precedes the last three sentences here, but this might have originated in a paraphrase, a transcription error, or a misquotation; it does not appear in any editions of the essay which have thus far been checked.

Now when we think that each of these stars is probably the centre of a solar system grander than our own, we cannot seriously take ourselves to be the only minds in it all.

Nowadays everyone knows that the US is the worlds biggest polluter, and that with only one 20th of the worlds population it produces a quarter of its greenhouse gas emissions. But the US government, in an abdication of leadership of epic proportions, is refusing to take the problem seriously.  Emissions from the US are up 14% on those in 1990 and are projected to rise by a further 12% over the next decade.

Once I found out the secret of the universe. I have forgotten what it was, but I know that the Creator does not take Creation seriously, for I remember that He sat in Space with all His work in front of Him and laughed.

Only the insane take themselves seriously.

Philosophers of science constantly discuss theories and representation of reality, but say almost nothing about experiment, technology, or the use of knowledge to alter the world. This is odd, because experimental method used to be just another name for scientific method.... I hope [to] initiate a Back-to-Bacon movement, in which we attend more seriously to experimental science. Experimentation has a life of its own.

Representing and Intervening, p. 149f (1983). Announcing the author's intention to stress 'intervening' as an essential component of science.

The custom of giving patients appointments weeks in advance, during which time their illness may become seriously aggravated, seems to me to fall short of the ideal doctor-patient relationship.

The important thing in any science is to do the things that can be done. Scientists naturally have a right and a duty to have opinions. But their science gives them no special insight into public affairs. There is a time for scientists and movie stars and people who have flown the Atlantic to restrain their opinions lest they be taken more seriously than they should be.

The man who is thoroughly convinced of the universal operation of the law of causation cannot for a moment entertain the idea of a being who interferes in the course of eventsprovided, of course, that he takes the hypothesis of causality really seriously. He has no use for the religion of fear and equally little for social or moral religion. A God who rewards and punishes is inconceivable to him for the simple reason that a mans actions are determined by necessity, external and internal, so that in Gods eyes he cannot be responsible, any more than an inanimate object is responsible for the motions it undergoes. Science has therefore been charged with undermining morality, but the charge is unjust. A mans ethical behavior should be based effectually on sympathy, education, and social ties and needs; no religious basis is necessary. Man would indeed be in a poor way if he had to be restrained by fear of punishment and hopes of reward after death.

From 'Religion And Science', as collected in Ideas And Opinions (1954), 39, given its source as: Written expressly for the New York Times Magazine. Appeared there November 9, 1930 (pp. 1-4). The German text was published in the Berliner Tageblatt, November 11, 1930. The NYT Magazine article in full, is reprinted in Edward H. Cotton (ed.), Has Science Discovered God? A Symposium of Modern Scientific Opinion (1931), 101. This original version directly from the magazine has significantly different wording, beginning, For anyone who is pervaded with the sense of causal law. See this alternate form on the Albert Einstein Quotes page on this website. As for why the difference, Webmaster speculates the book form editor perhaps used a revised translation from Einsteins German article.

This is often the way it is in physicsour mistake is not that we take our theories too seriously, but that we do not take them seriously enough. It is always hard to realize that these numbers and equations we play with at our desks have something to do with the real world.

To take those fools in clerical garb seriously is to show them too much honor.

Your right to hold an opinion is not being contested. Your expectation that it be taken seriously is.