A man cannot well stand by himself, and so he is glad to join a party; because if he does not find rest there, he at any rate finds quiet and safety.

By virtue of the way it has organized its technological base, contemporary industrial society tends to be totalitarian. For 'totalitarian' is not only a terroristic political coordination of society, but also a non-terroristic economic-technical coordination which operates through the manipulation of needs by vested interests. It thus precludes the emergence of an effective opposition against the whole. Not only a specific form of government or party rule makes for totalitarianism, but also a specific system of production and distribution which may well be compatible with a 'pluralism' of parties, newspapers, 'countervailing powers,' etc.

Collective unity is not the result of the brotherly love of the faithful for each other. The loyalty of the true believer is to the wholethe church, party, nationand not to his fellow true believer. True loyalty between individuals is possible only in a loose and relatively free society.

Debate is an art form. It is about the winning of arguments. It is not about the discovery of truth. There are certain rules and procedures to debate that really have nothing to do with establishing factwhich creationists have mastered. Some of those rules are: never say anything positive about your own position because it can be attacked, but chip away at what appear to be the weaknesses in your opponents position. They are good at that. I dont think I could beat the creationists at debate. I can tie them. But in courtrooms they are terrible, because in courtrooms you cannot give speeches. In a courtroom you have to answer direct questions about the positive status of your belief. We destroyed them in Arkansas. On the second day of the two-week trial we had our victory party!

In mathematics it [sophistry] had no place from the beginning: Mathematicians having had the wisdom to define accurately the terms they use, and to lay down, as axioms, the first principles on which their reasoning is grounded. Accordingly we find no parties among mathematicians, and hardly any disputes.

In Essays on the Intellectual Powers of Man, Essay 1, chap. 1.

In the higher walks of politics the same sort of thing occurs. The statesman who has gradually concentrated all power within himself  may have had anything but a public motive The phrases which are customary on the platform and in the Party Press have gradually come to him to seem to express truths, and he mistakes the rhetoric of partisanship for a genuine analysis of motives He retires from the world after the world has retired from him.

Its not for glory that Soviet cosmonauts are in this assault on the cosmos; they are motivated by a limitless love for and devotion to their country, the Party and the people, and by a desire to help Soviet scientists to discover the secrets of the universe.

Let no one suppose that the words doctor and patient can disguise from the parties the fact that they are employer and employee.

The great question.  is, shall we surrender to our surroundings, or shall we make our peace with nature and begin to make reparations for the damage we have done to our air, our land, our water? Restoring nature to its natural state is a cause beyond party and beyond factions. It has become a common cause of all the people of America. 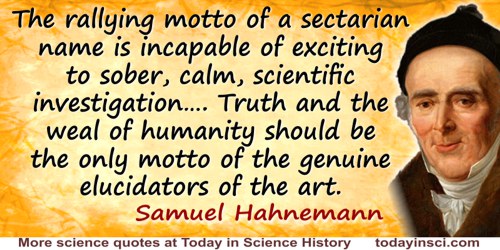 The rallying motto of a sectarian name is incapable of exciting to sober, calm, scientific investigation; it only rouses the explosive spirit of accusations of heresy to a fierce volcanic flame. Truth and the weal of humanity should be the only motto of the genuine elucidators of the art, and the watchword of their brotherly, peaceful bond of union, without slavish adherence to any sectarian leader, if we would not see the little good that we know completely sacrificed to party spirit and discord.

In 'View of Professional Liberality at the Commencement of the Nineteenth Century' from the Allgemeiner Anzeiger d. D. No. 32 (1801), collected in R.E. Dudgeon (ed., trans.) The Lesser Writings of Samuel Hahnemann (1851), 363.

Thinking must never submit itself, neither to a dogma, nor to a party, nor to a passion, nor to an interest, nor to a preconceived idea, nor to whatever it may be, if not to facts themselves, because, for it, to submit would be to cease to be.

What I chiefly admired, and thought altogether unaccountable, was the strong disposition I observed in them [the mathematicians of Laputa] towards news and politics; perpetually inquiring into public affairs; giving their judgments in matters of state; and passionately disputing every inch of party opinion. I have indeed observed the same disposition among most of the mathematicians I have known in Europe, although I could never discover the least analogy between the two sciences.

Yet, hermit and stoic as he was, he was really fond of sympathy, and threw himself heartily and childlike into the company of young people whom he loved, and whom he delighted to entertain, as he only could, with the varied and endless anecdotes of his experiences by field and river: and he was always ready to lead a huckleberry-party or a search for chestnuts and grapes.