All the inventions and devices ever constructed by the human hand or conceived by the human mind, no matter how delicate, how intricate and complicated, are simple, childish toys compared with that most marvelously wrought mechanism, the human body. Its parts are far more delicate, and their mutual adjustments infinitely more accurate, than are those of the most perfect chronometer ever made.

As a boy I had liked both drawing and physics, and I always abhorred the role of being a spectator. In 1908, when I was 15, I designed, built and flew a toy model airplane which won the then-famous James Gordon Bennett Cup. By 16 I had discovered that design could be fun and profitable, and this lesson has never been lost on me.

As to Bells talking telegraph, it only creates interest in scientific circles, and, as a toy it is beautiful; but  its commercial value will be limited.

For me the most beautiful thing about Meccano is that it teaches you to think.

Guido was as much enchanted by the rudiments of algebra as he would have been if I had given him an engine worked by steam, with a methylated spirit lamp to heat the boiler; more enchanted, perhaps for the engine would have got broken, and, remaining always itself, would in any case have lost its charm, while the rudiments of algebra continued to grow and blossom in his mind with an unfailing luxuriance. Every day he made the discovery of something which seemed to him exquisitely beautiful; the new toy was inexhaustible in its potentialities.

In Young Archimedes: And Other Stories (1924), 299. The fictional character, Guido, is a seven year old boy. Methylated spirit is an alcohol fuel.

I have always been very fond of mathematicsfor one short period, I even toyed with the possibility of abandoning chemistry in its favour. I enjoyed immensely both its conceptual and formal beauties, and the precision and elegance of its relationships and transformations. Why then did I not succumb to its charms?  because by and large, mathematics lacks the sensuous elements which play so large a role in my attraction to chemistry.I love crystals, the beauty of their forms and formation; liquids, dormant, distilling, sloshing! The fumes, the odorsgood or bad, the rainbow of colors; the gleaming vessels of every size, shape and purpose.

It is frivolous to fix pedantically the date of particular inventions. They have all been invented over and over fifty times. Man is the arch machine, of which all these shifts drawn from himself are toy models. He helps himself on each emergency by copying or duplicating his own structure, just so far as the need is.

More than the diamond Koh-i-noor, which glitters among their crown jewels, they prize the dull pebble which is wiser than a man, whose poles turn themselves to the poles of the world, and whose axis is parallel to the axis of the world. Now, their toys are steam and galvanism.

English Traits (1856), 47. The “dull pebble” refers to lodestone and its magnetic properties.

October 9, 1863
Always, however great the height of the balloon, when I have seen the horizon it has roughly appeared to be on the level of the car though of course the dip of the horizon is a very appreciable quantity or the same height as the eye. From this one might infer that, could the earth be seen without a cloud or anything to obscure it, and the boundary line of the plane approximately the same height as the eye, the general appearance would be that of a slight concavity; but I have never seen any part of the surface of the earth other than as a plane.
Towns and cities, when viewed from the balloon are like models in motion. I shall always remember the ascent of 9th October, 1863, when we passed over London about sunset. At the time when we were 7,000 feet high, and directly over London Bridge, the scene around was one that cannot probably be equalled in the world. We were still so low as not to have lost sight of the details of the spectacle which presented itself to our eyes; and with one glance the homes of 3,000,000 people could be seen, and so distinct was the view, that every large building was easily distinguishable. In fact, the whole of London was visible, and some parts most clearly. All round, the suburbs were also very distinct, with their lines of detached villas, imbedded as it were in a mass of shrubs; beyond, the country was like a garden, its fields, well marked, becoming smaller and smaller as the eye wandered farther and farther away.
Again looking down, there was the Thames, throughout its whole length, without the slightest mist, dotted over its winding course with innumerable ships and steamboats, like moving toys. Gravesend was visible, also the mouth of the Thames, and the coast around as far as Norfolk. The southern shore of the mouth of the Thames was not so clear, but the sea beyond was seen for many miles; when at a higher elevation, I looked for the coast of France, but was unable to see it. On looking round, the eye was arrested by the garden-like appearance of the county of Kent, till again London claimed yet more careful attention.
Smoke, thin and blue, was curling from it, and slowly moving away in beautiful curves, from all except one part, south of the Thames, where it was less blue and seemed more dense, till the cause became evident; it was mixed with mist rising from the ground, the southern limit of which was bounded by an even line, doubtless indicating the meeting of the subsoils of gravel and clay. The whole scene was surmounted by a canopy of blue, everywhere free from cloud, except near the horizon, where a band of cumulus and stratus extended all round, forming a fitting boundary to such a glorious view.
As seen from the earth, the sunset this evening was described as fine, the air being clear and the shadows well defined; but, as we rose to view it and its effects, the golden hues increased in intensity; their richness decreased as the distance from the sun increased, both right and left; but still as far as 90º from the sun, rose-coloured clouds extended. The remainder of the circle was completed, for the most part, by pure white cumulus of well-rounded and symmetrical forms.
I have seen London by night. I have crossed it during the day at the height of four miles. I have often admired the splendour of sky scenery, but never have I seen anything which surpassed this spectacle. The roar of the town heard at this elevation was a deep, rich, continuous sound the voice of labour. At four miles above London, all was hushed; no sound reached our ears.

Our inventions are wont to be pretty toys, which distract our attention from serious things. They are but improved means to an unimproved end. 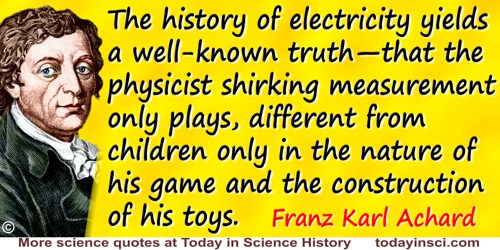 The determination of the relationship and mutual dependence of the facts in particular cases must be the first goal of the Physicist; and for this purpose he requires that an exact measurement may be taken in an equally invariable manner anywhere in the world Also, the history of electricity yields a well-known truththat the physicist shirking measurement only plays, different from children only in the nature of his game and the construction of his toys.

The thing about electronic games is that they are basically repetitive. After a while, the children get bored. They need something different. [Meccano construction toy kits] offer creativity, a notion of mechanics, discovery of the world around you.

The web is more a social creation than a technical one. I designed it for a social effect—to help people work together—and not as a technical toy. The ultimate goal of the Web is to support and improve our weblike existence in the world. We clump into families, associations, and companies. We develop trust across the miles and distrust around the corner.

Weaving The Web: The Original Design and Ultimate Destiny of the World Wide Web (2004), 123.

Underneath all the various theories which are only created to be destroyed; underneath all the hypotheses which one century regards as disclosing the secret mechanism and hidden spring of the universeand which the following century breaks to pieces as childrens toysmay be recognized the slow progress, slow but incessant, of mathematical physics.

Who thinks all Science, as all Virtue, vain;
Who counts Geometry and numbers Toys

[About the structure of DNA] [T]he whole business was like a child's toy that you could buy at the dime store, all built in this wonderful way that you could explain in Life magazine so that really a five-year-old can understand what's going on...This was the greatest surprise for everyone.