Engineering stimulates the mind. Kids get bored easily. They have got to get out and get their hands dirty: make things, dismantle things, fix things. When schools can offer that, youŌĆÖll have an engineer for life.

As quoted on imdb.com biography page for Bruce Dickinson. Webmaster has not yet found a primary source for this quote. Can you help?

Every kid starts out as a natural-born scientist, and then we beat it out of them. A few trickle through the system with their wonder and enthusiasm for science intact.

Exits sun; enters moon.
This moon is never alone.
Stars are seen all around.
These twinklers do not make a sound.
The tiny ones shine from their place.
Mother moon watches with a smiling face.
Its light is soothing to the eyes.
NightŌĆÖs darkness hides its face.
Cool and calm is its light.
Heat and sweat are never felt.
Some days, moon is not seen.
Makes kids wonder, where had it been?
Partial eclipse shades the moon.
In summers it does not arrive soon.
Beautiful is this milky ball.
It is the love of one and all.

Four years ago nobody but nuclear physicists had ever heard of the Internet. Today even my cat, Socks, has his own web page. IŌĆÖm amazed at that. I meet kids all the time, been talking to my cat on the Internet.

I had a Meccano set with which I ŌĆ£playedŌĆØ endlessly. Meccano which was invented by Frank Hornby around 1900, is called Erector Set in the US. New toys (mainly Lego) have led to the extinction of Meccano and this has been a major disaster as far as the education of our young engineers and scientists is concerned. Lego is a technically trivial plaything and kids love it partly because it is so simple and partly because it is seductively coloured. However it is only a toy, whereas Meccano is a real engineering kit and it teaches one skill which I consider to be the most important that anyone can acquire: This is the sensitive touch needed to thread a nut on a bolt and tighten them with a screwdriver and spanner just enough that they stay locked, but not so tightly that the thread is stripped or they cannot be unscrewed. On those occasions (usually during a party at your house) when the handbasin tap is closed so tightly that you cannot turn it back on, you know the last person to use the washroom never had a Meccano set.

I remember being with my grandmother and mother and my uncle came in and asked what I wanted to be when grew up. I said ŌĆśA doctor,ŌĆÖ which took him aback. He was expecting me to say ŌĆśnurseŌĆÖ or ŌĆśactress.ŌĆÖ And my mother and grandmother laughed like, ŌĆśKids say the darndest things.ŌĆÖ I grew up in a time when women were not expected to do anything interesting.

If we can get kids talking about conservation and doing it, they can have a great influence on their parents by lecturing them and pointing the finger.

In the past, you wouldnŌĆÖt have had any problem in getting a countryman to explain the difference between a blackbird and a song thrush, but you might have that difficulty with a kid now. Equally, if you asked a chap about gorillas in the 19th-century, he wouldnŌĆÖt have heard of the creatures, but today an urban boy knows all about them.

Explaining how the success of nature documentaries may result in children who know more about gorillas than the wildlife in their own gardens. As reported by Adam Lusher in 'Sir David Attenborough', Daily Mail (28 Feb 2014).

It seems to me it [hands-on experience] was more prevalent in a more primitive society, where youŌĆÖre closer to machinery. [As a university teacher,] I see this with farm kids all the time. They have a more or less rugged self-reliance.

About the his concern that as society is changing, education is losing the benefits of childhood hand-on experience. In interview, Rushworth M. Kidder, 'Grounded in Space Science', Christian Science Monitor (22 Dec 1989).

Kids from all the local villages [on the slopes of Mount Gorongosa in Mozambique] showed up, and I had to be the expert for everything. ŌĆ” These kids went wild. They were listening to everything that I and others had to say about the creatures they were bringing in and the plants and so on. And I realized that anywhere a bioblitz could be a powerful instrument in introducing kids to science.

Describing a community bioblitz he helped lead in 2011, while serving as an adviser during the creation of the national park there. In two hours, he counted 60 species in 39 families and 13 orders of living things were brought in. From interview with National Geographic, in Andrew Revkin, 'Conservation Legend Has Big Plans For Future', on nationalgeographic.com website. Wilson added that the park, with the help of the American conservationist and philanthropist Greg Carr, has since become ŌĆ£a powerful force in helping the country of Mozambique recover from a very serious civil war, and in addition, create a better life for a great many people.ŌĆØ 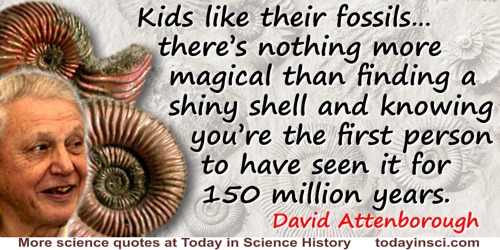 Kids like their fossils. IŌĆÖve taken my godson fossil-hunting and thereŌĆÖs nothing more magical than finding a shiny shell and knowing youŌĆÖre the first person to have seen it for 150 million years.

My mother, my dad and I left Cuba when I was two [January, 1959]. Castro had taken control by then, and life for many ordinary people had become very difficult. My dad had worked [as a personal bodyguard for the wife of Cuban president Batista], so he was a marked man. We moved to Miami, which is about as close to Cuba as you can get without being there. ItŌĆÖs a Cuba-centric society. I think a lot of Cubans moved to the US thinking everything would be perfect. Personally, I have to say that those early years were not particularly happy. A lot of people didnŌĆÖt want us around, and I can remember seeing signs that said: ŌĆ£No children. No pets. No Cubans.ŌĆØ Things were not made easier by the fact that Dad had begun working for the US government. At the time he couldnŌĆÖt really tell us what he was doing, because it was some sort of top-secret operation. He just said he wanted to fight against what was happening back at home. [EstefanŌĆÖs father was one of the many Cuban exiles taking part in the ill-fated, anti-Castro Bay of Pigs invasion to overthrow dictator Fidel Castro.] One night, Dad disappered. I think he was so worried about telling my mother he was going that he just left her a note. There were rumours something was happening back home, but we didnŌĆÖt really know where Dad had gone. It was a scary time for many Cubans. A lot of men were involvedŌĆölots of families were left without sons and fathers. By the time we found out what my dad had been doing, the attempted coup had taken place, on April 17, 1961. Intitially heŌĆÖd been training in Central America, but after the coup attempt he was captured and spent the next wo years as a political prisoner in Cuba. That was probably the worst time for my mother and me. Not knowing what was going to happen to Dad. I was only a kid, but I had worked out where my dad was. My mother was trying to keep it a secret, so she used to tell me Dad was on a farm. Of course, I thought that she didnŌĆÖt know what had really happened to him, so I used to keep up the pretence that Dad really was working on a farm. We used to do this whole pretending thing every day, trying to protect each other. Those two years had a terrible effect on my mother. She was very nervous, just going from church to church. Always carrying her rosary beads, praying her little heart out. She had her religion, and I had my music. Music was in our family. My mother was a singer, and on my fatherŌĆÖs side there was a violinist and a pianist. My grandmother was a poet.

Nine out of the 10 big fish that were around when I was growing upŌĆōthe swordfish, the tuna, the marlin, the sharkŌĆō90 percent of them are gone. If there was that many sharks when I was a kid, there are now this many.

The best sex education for kids is when Daddy pats Mommy on the fanny when he comes home from work.

The science is clear: The earth is round, the sky is blue, and #vaccineswork. LetŌĆÖs protect all our kids.

[When I was a child] I grew up in Brooklyn, New York, and I was a street kid. ŌĆ” [T]here was one aspect of that environment that, for some reason, struck me as different, and that was the stars. ŌĆ” I could tell they were lights in the sky, but that wasnŌĆÖt an explanation. I mean, what were they? Little electric bulbs on long black wires, so you couldnŌĆÖt see what they were held up by? What were they? ŌĆ” My mother said to me, "Look, weŌĆÖve just got you a library card ŌĆ” get out a book and find the answer.ŌĆØ ŌĆ” It was in there. It was stunning. The answer was that the Sun was a star, except very far away. ŌĆ” The dazzling idea of a universe vast beyond imagining swept over me. ŌĆ” I sensed awe.