ARCHIMEDES. On hearing his name, shout Eureka! Or else: Give me a fulcrum and I will move the world. There is also Archimedes screw, but you are not expected to know what that is.

As the component parts of all new machines may be said to be old[,] it is a nice discriminating judgment, which discovers that a particular arrangement will produce a new and desired effect. ... Therefore, the mechanic should sit down among levers, screws, wedges, wheels, etc. like a poet among the letters of the alphabet, considering them as the exhibition of his thoughts; in which a new arrangement transmits a new idea to the world.

A Treatise on the Improvement of Canal Navigation (1796), preface, x.

From the intensity of the spots near the centre, we can infer that the protein molecules are relatively dense globular bodies, perhaps joined together by valency bridges, but in any event separated by relatively large spaces which contain water. From the intensity of the more distant spots, it can be inferred that the arrangement of atoms inside the protein molecule is also of a perfectly definite kind, although without the periodicities characterising the fibrous proteins. The observations are compatible with oblate spheroidal molecules of diameters about 25 A. and 35 A., arranged in hexagonal screw-axis. ... At this stage, such ideas are merely speculative, but now that a crystalline protein has been made to give X-ray photographs, it is clear that we have the means of checking them and, by examining the structure of all crystalline proteins, arriving at a far more detailed conclusion about protein structure than previous physical or chemical methods have been able to give.

I find that by confining a workman to one particular limb of the pistol until he has made two thousand, I save at least one quarter of his labor, to what I should provided I finishd them by small quantities; and the work will be as much better as it is quicker made. ... I have some seventeen thousand screws & other parts of pistols now forgd. & many parts nearly finished & the business is going on brisk and lively.
Describing subdivision of labour and standardization of parts.

I remember vividly my student days, spending hours at the light microscope, turning endlessly the micrometric screw, and gazing at the blurred boundary which concealed the mysterious ground substance where the secret mechanisms of cell life might be found.

It did not take atomic weapons to make man want peace. But the atomic bomb was the turn of the screw. The atomic bomb made the prospect of future war unendurable. It has led us up those last few steps to the mountain pass; and beyond there is a different country.

Commencement address (1946). As quoted in book review (of Richard Rhodes, The Making of the Atomic Bomb), by William J. Broad, The Men Who Made the Sun Rise', New York Times Book Review (8 Feb 1987), 39. Cited as from 'The Atomic Bomb and College Education' (1946), in Bartlett's Familiar Quotations (18th ed., 2014). as quoted, without citation, in . Please contact Webmaster if you know a primary source.

Nature does not suffer her veil to be taken from her, and what she does not choose to reveal to the spirit, thou wilt not wrest from her by levers and screws.

In James Wood, Dictionary of Quotations from Ancient and Modern, English and Foreign Sources (1893), 119:29.

Screw Machine Engineering, a magazine whose name a hyphen would have improved.

The dimmed outlines of phenomenal things all merge into one another unless we put on the focusing-glass of theory, and screw it up sometimes to one pitch of definition and sometimes to another, so as to see down into different depths through the great millstone of the world.

Are There Real Analogies in Nature?' (Feb 1856). Quoted in Lewis Campbell and William GarnettThe Life of James Clerk Maxwell (1882), 237.

The work  was  so blinding that I could scarcely see afterwards, and the difficulty was increased by the fact that my microscope was almost worn out, the screws being rusted with sweat from my hands and forehead, and my only remaining eye-piece being cracked Fortunately my invaluable oil-immersion object-glass remained good. 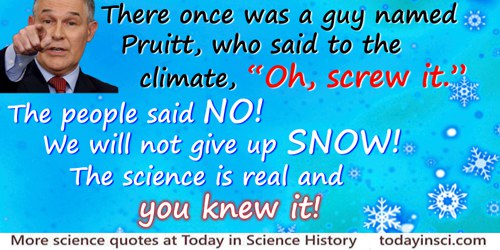 There once was a guy named Pruitt / Who said to the climate Oh, screw it. / The people said NO! / We will not give up SNOW. / The science is real and you knew it.

Sign carried by a protester during the Peoples Climate March, Washington, D.C. (29 Apr 2017). Pictured on Twitter @123catherinep. Note: Scott Pruitt was the (very short term) then head of the Environmental Protection Agency (EPA).

We may regard the cell quite apart from its familiar morphological aspects, and contemplate its constitution from the purely chemical standpoint. We are obliged to adopt the view, that the protoplasm is equipped with certain atomic groups, whose function especially consists in fixing to themselves food-stuffs, of importance to the cell-life. Adopting the nomenclature of organic chemistry, these groups may be designated side-chains. We may assume that the protoplasm consists of a special executive centre (Leistungs-centrum) in connection with which are nutritive side-chains The relationship of the corresponding groups, i.e., those of the food-stuff, and those of the cell, must be specific. They must be adapted to one another, as, e.g., male and female screw (Pasteur), or as lock and key (E. Fischer).

Weve all seen Apollo 13. NASA guys always have the old plastic bag, cardboard tubing, and duct tape option to fall back on when the shit hits the fan. Neurosurgeons have no such leeway. What it comes down to is this: if a brain surgeon screws up, it means a multi-million-dollar malpractice suit, but if a rocket scientist screws up, it means a multi-million-dollar hit movie starring Tom Hanks.

What distinguishes the straight line and circle more than anything else, and properly separates them for the purpose of elementary geometry? Their self-similarity. Every inch of a straight line coincides with every other inch, and of a circle with every other of the same circle. Where, then, did Euclid fail? In not introducing the third curve, which has the same propertythe screw. The right line, the circle, the screwthe representations of translation, rotation, and the two combinedought to have been the instruments of geometry. With a screw we should never have heard of the impossibility of trisecting an angle, squaring the circle, etc.

[The screw machine] was on the principle of the guage or sliding lathe now in every workshop throughout the world; the perfection of which consists in that most faithful agent gravity, making the joint, and that almighty perfect number three, which is in harmony itself. I was young when I learned that principle. I had never seen my grandmother putting a chip under a three-legged milking-stool; but she always had to put a chip under a four-legged table, to keep it steady. I cut screws of all dimensions by this machine, and did them perfectly. (1846)

[The steamboat] will answer for sea voyages as well as for inland navigation, in particular for packets, where there may be a great number of passengers. He is also of opinion, that fuel for a short voyage would not exceed the weight of water for a long one, and it would produce a constant supply of fresh water. ... [T]he boat would make head against the most violent tempests, and thereby escape the danger of a lee shore; and that the same force may be applied to a pump to free a leaky ship of her water. ... [T]he good effects of the machine, is the almost omnipotent force by which it is actuated, and the very simple, easy, and natural way by which the screws or paddles are turned to answer the purpose of oars.
[This letter was written in 1785, before the first steamboat carried a man (Fitch) on 27 Aug 1787.]