Ardent desire for knowledge, in fact, is the one motive attracting and supporting investigators in their efforts; and just this knowledge, really grasped and yet always flying before them, becomes at once their sole torment and their sole happiness. Those who do not know the torment of the unknown cannot have the joy of discovery which is certainly the liveliest that the mind of man can ever feel.

At first sight nothing seems more obvious than that everything has a beginning and an end, and that everything can be subdivided into smaller parts. Nevertheless, for entirely speculative reasons the philosophers of Antiquity, especially the Stoics, concluded this concept to be quite unnecessary. The prodigious development of physics has now reached the same conclusion as those philosophers, Empedocles and Democritus in particular, who lived around 500 B.C. and for whom even ancient man had a lively admiration.

Euler was a believer in God, downright and straightforward. The following story is told by Thiebault, in his Souvenirs de vingt ans de sĂ©jour Ă  Berlin, â€¦ Thiebault says that he has no personal knowledge of the truth of the story, but that it was believed throughout the whole of the north of Europe. Diderot paid a visit to the Russian Court at the invitation of the Empress. He conversed very freely, and gave the younger members of the Court circle a good deal of lively atheism. The Empress was much amused, but some of her counsellors suggested that it might be desirable to check these expositions of doctrine. The Empress did not like to put a direct muzzle on her guestâ€™s tongue, so the following plot was contrived. Diderot was informed that a learned mathematician was in possession of an algebraical demonstration of the existence of God, and would give it him before all the Court, if he desired to hear it. Diderot gladly consented: though the name of the mathematician is not given, it was Euler. He advanced toward Diderot, and said gravely, and in a tone of perfect conviction:
Monsieur, (a + bn) / n = x, donc Dieu existe; repondez!
Diderot, to whom algebra was Hebrew, was embarrassed and disconcerted; while peals of laughter rose on all sides. He asked permission to return to France at once, which was granted.

In Budget of Paradoxes (1878), 251. [The declaration in French expresses, â€śtherefore God exists; please answer!â€ť This Euler-Diderot anecdote, as embellished by De Morgan, is generally regarded as entirely fictional. Diderot before he became an encyclopedist was an accomplished mathematician and fully capable of recognizingâ€”and responding toâ€”the absurdity of an algebraic expression in proving the existence of God. See B.H. Brown, 'The Euler-Diderot Anecdote', The American Mathematical Monthly (May 1942), 49, No. 5, 392-303. â€”Webmaster.]

Gay-Lussac was quick, lively, ingenious and profound, with great activity of mind and great facility of manipulation. I should place him at the head of all the living chemists in France.

I find that by confining a workman to one particular limb of the pistol until he has made two thousand, I save at least one quarter of his labor, to what I should provided I finishd them by small quantities; and the work will be as much better as it is quicker made. ... I have some seventeen thousand screws & other parts of pistols now forgd. & many parts nearly finished & the business is going on brisk and lively.
Describing subdivision of labour and standardization of parts. 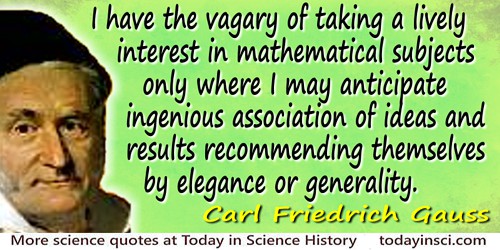 I have the vagary of taking a lively interest in mathematical subjects only where I may anticipate ingenious association of ideas and results recommending themselves by elegance or generality.

Inspiration is the inclination of the spirit to the most lively reception of impressions and to the grasping and exposition of ideas.

It is not enough to teach man a specialty. Through it he may become a kind of useful machine, but not a harmoniously developed personality. It is essential that the student acquire an understanding of and a lively feeling for values. He must acquire a vivid sense of the beautiful and of the morally good. Otherwise heâ€”with his specialized knowledgeâ€”more closely resembles a well-trained dog than a harmoniously developed person.

Lecturing after a fashion is easy enough ; teaching is a very different affair. ... The transmission of ideas from one mind to another, in a simple unequivocal form, is not always easy ; but in teaching, the object is not merely to convey the idea, but to give a lively and lasting impression; something that should not merely cause the retention of the image, but in such connection as to excite another process, ' thought.'

Mr Humphry Davy is a lively and talented man, and a thorough chemist; but if I might venture to give an opinion... he is rather too lively to fill the Chair of the Royal Society with that degree of gravity it is most becoming to assume.

Nature when more shy in one, hath more freely confest and shewn herself in another; and a Fly sometimes hath given greater light towards the true knowledge of the structure and the uses of the Parts in Humane Bodies, than an often repeated dissection of the same might have done â€¦ We must not therefore think the meanest of the Creation vile or useless, since that in them in lively Characters (if we can but read) we may find the knowledge of a Deity and ourselves â€¦ In every Animal there is a world of wonders; each is a Microcosme or a world in it self.

Phocrena, or the Anatomy of a Porpess, dissected at Gresham College: With a Prreliminary Discourse Concerning Anatomy, and a Natural History of Animals (1680), 2-3.

People have wracked their brains for an explanation of benzene and how the celebrated man [KekulĂ©] managed to come up with the concept of the benzene theory. With regard to the last point especially, a friend of mine who is a farmer and has a lively interest in chemistry has asked me a question which I would like to share with you. My â€śagricultural friendâ€ť apparently believes he has traced the origins of the benzene theory. â€śHas KekulĂ©,â€ť so ran the question, â€śonce been a bee-keeper? You certainly know that bees too build hexagons; they know well that they can store the greatest amount of honey that way with the least amount of wax. I always liked it,â€ť my agricultural friend went on, â€śWhen I received a new issue of the Berichte; admittedly, I don't read the articles, but I like the pictures very much. The patterns of benzene, naphthalene and especially anthracene are indeed wonderful. When I look at the pictures I always have to think of the honeycombs of my bee hives.â€ť

That the great majority of those who leave school should have some idea of the kind of evidence required to substantiate given types of belief does not seem unreasonable. Nor is it absurd to expect that they should go forth with a lively interest in the ways in which knowledge is improved and a marked distaste for all conclusions reached in disharmony with the methods of scientific inquiry.

There are many points in the history of an invention which the inventor himself is apt to overlook as trifling, but in which posterity never fail to take a deep interest. The progress of the human mind is never traced with such a lively interest as through the steps by which it perfects a great invention; and there is certainly no invention respecting which this minute information will be more eagerly sought after, than in the case of the steam-engine.

Quoted in The Origin and Progress of the Mechanical Inventions of James Watt (1854), Vol.1, 4.