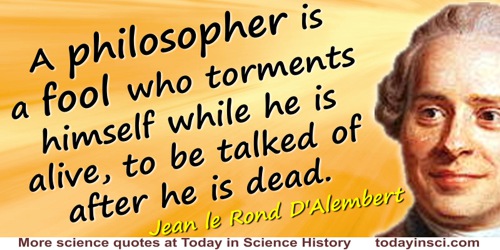 A philosopher is a fool who torments himself while he is alive, to be talked of after he is dead.

As translated, without citation, in Familiar Short Sayings of Great Men: With Historical and Explanatory Notes (1887), 6.

Ardent desire for knowledge, in fact, is the one motive attracting and supporting investigators in their efforts; and just this knowledge, really grasped and yet always flying before them, becomes at once their sole torment and their sole happiness. Those who do not know the torment of the unknown cannot have the joy of discovery which is certainly the liveliest that the mind of man can ever feel. 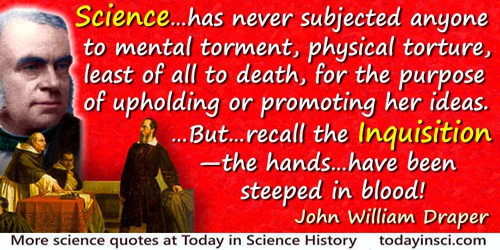 As to Science, she has never sought to ally herself to civil power. She has never attempted to throw odium or inflict social ruin on any human being. She has never subjected anyone to mental torment, physical torture, least of all to death, for the purpose of upholding or promoting her ideas. She presents herself unstained by cruelties and crimes. But in the Vaticanwe have only to recall the Inquisitionthe hands that are now raised in appeals to the Most Merciful are crimsoned. They have been steeped in blood!

History of the Conflict between Religion and Science (1875), xi.

I am convinced that an important stage of human thought will have been reached when the physiological and the psychological, the objective and the subjective, are actually united, when the tormenting conflicts or contradictions between my consciousness and my body will have been factually resolved or discarded.

Ill change my state with any wretch
Thou canst from gaol of dunghill fetch.
My pains past cure, another hell;
I may not in this torment dwell.
Now desperate I hate my life,
Lend me a halter or a knife!
All my griefs to this are jolly,
Naught so damned as melancholy.

Nevertheless, his [Dostoyevskys] personality retained sadistic traits in plenty, which show themselves in his irritability, his love of tormenting, and his intolerance even towards people he loved, and which appear also in the way in which, as an author, he treats his readers. Thus in little things he was a sadist towards others, and in bigger things a sadist towards himself, in fact a masochistthat is to say the mildest, kindliest, most helpful person possible.

No anatomist ever discovered a system of organization, calculated to produce pain and disease; or, in explaining the parts of the human body, ever said, this is to irritate; this is to inflame; this duct is to convey the gravel to the kidneys; this gland to secrete the humour which forms the gout: if by chance he come at a part of which he knows not the use, the most he can say is, that it is useless; no one ever suspects that it is put there to incommode, to annoy, or torment.

Nothing will ever equal that moment of joyous excitement which filled my whole being when I felt myself flying away from the earth. It was not mere pleasure; it was perfect bliss. Escaped from the frightful torments of persecution and of calumny, I felt that I was answering all in rising above all.

after making man's first ascent by hydrogen balloon in 1783 quoted in Wonderful Balloon Ascents: Or, the Conquest of the Skies by F. Marion

Researchers, with science as their authority, will be able to cut [animals] up, alive, into small pieces, drop them from a great height to see if they are shattered by the fall, or deprive them of sleep for sixteen days and nights continuously for the purposes of an iniquitous monograph... Animal trust, undeserved faith, when at last will you turn away from us? Shall we never tire of deceiving, betraying, tormenting animals before they cease to trust us?

The last few meters up to the summit no longer seem so hard. On reaching the top, I sit down and let my legs dangle into space. I dont have to climb anymore. I pull my camera from my rucksack and, in my down mittens, fumble a long time with the batteries before I have it working properly. Then I film Peter. Now, after the hours of torment, which indeed I didnt recognize as torment, now, when the monotonous motion of plodding upwards is at an end, and I have nothing more to do than breathe, a great peace floods my whole being. I breathe like someone who has run the race of his life and knows that he may now rest forever. I keep looking all around, because the first time I didnt see anything of the panorama I had expected from Everest, neither indeed did I notice how the wind was continually chasing snow across the summit. In my state of spiritual abstraction, I no longer belong to myself and to my eyesight. I am nothing more than a single, narrow, gasping lung, floating over the mists and the summits.

The next object which I have observed is the essence or substance of the Milky Way. By the aid of a telescope anyone may behold this in a manner which so distinctly appeals to the senses that all the disputes which have tormented philosophers through so many ages are exploded at once by the irrefragable evidence of our eyes, and we are freed from wordy disputes upon this subject, for the Galaxy is nothing else but a mass of innumerable stars planted together in clusters.

There is nothing frightening about an eternal dreamless sleep. Surely it is better than eternal torment in Hell and eternal boredom in Heaven.

To be creative, scientists need libraries and laboratories and the company of other scientists; certainly a quiet and untroubled life is a help. A scientist's work is in no way deepened or made more cogent by privation, anxiety, distress, or emotional harassment. To be sure, the private lives of scientists may be strangely and even comically mixed up, but not in ways that have any special bearing on the nature and quality of their work. If a scientist were to cut off an ear, no one would interpret such an action as evidence of an unhappy torment of creativity; nor will a scientist be excused any bizarrerie, however extravagant, on the grounds that he is a scientist, however brilliant.

Well do I remember that dark hot little office in the hospital at Begumpett, with the necessary gleam of light coming in from under the eaves of the veranda. I did not allow the punka to be used because it blew about my dissected mosquitoes, which were partly examined without a cover-glass; and the result was that swarms of flies and of 'eye-flies' - minute little insects which try to get into one's ears and eyelids - tormented me at their pleasure

In Memoirs, With a Full Account of the Great Malaria Problem and its Solution (1923), 221.