A mathematical proof should resemble a simple and clear-cut constellation, not a scattered cluster in the Milky Way.

A mile and a half from town, I came to a grove of tall cocoanut trees, with clean, branchless stems reaching straight up sixty or seventy feet and topped with a spray of green foliage sheltering clusters of cocoanuts—not more picturesque than a forest of colossal ragged parasols, with bunches of magnified grapes under them, would be. I once heard a grouty northern invalid say that a cocoanut tree might be poetical, possibly it was; but it looked like a feather-duster struck by lightning. I think that describes it better than a picture—and yet, without any question, there is something fascinating about a cocoanut tree—and graceful, too.

As Crystallography was born of a chance observation by HaĂĽy of the cleavage-planes of a single fortunately fragile specimen, â€¦ so out of the slender study of the Norwich Spiral has sprung the vast and interminable Calculus of Cyclodes, which strikes such far-spreading and tenacious roots into the profoundest strata of denumeration, and, by this and the multitudinous and multifarious dependent theories which cluster around it, reminds one of the Scriptural comparison of the Kingdom of Heaven â€śto a grain of mustard-seed which a man took and cast into his garden, and it grew and waxed a great tree, and the fowls of the air lodged in the branches of it.â€ť

From 'Outline Trace of the Theory of Reducible Cyclodes', Proceedings of the London Mathematical Society (1869), 2, 155, collected in Collected Mathematical Papers of James Joseph Sylvester (1908), Vol. 2, 683-684. 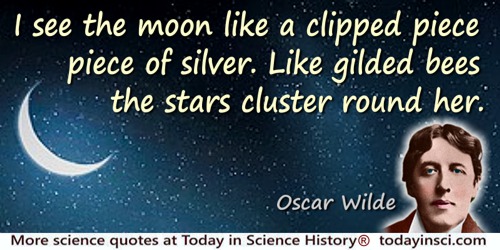 I see the moon like a clipped piece of silver. Like gilded bees the stars cluster round her.

In due time the evolution theory will have to abate its vehemence, cannot be allowâ€™d to dominate everything else, and will have to take its place as a segment of the circle, the clusterâ€”as but one of many theories, many thoughts, of profoundest valueâ€”and readjusting the differentiating much, yet leaving the divine secrets just as inexplicable and unreachable as beforeâ€”maybe more so.

In this lecture I would like to conclude with â€¦ some characteristics [of] gravity â€¦ The most impressive fact is that gravity is simple. It is simple to state the principles completely and not have left any vagueness for anybody to change the ideas of the law. It is simple, and therefore it is beautiful. It is simple in its pattern. I do not mean it is simple in its actionâ€”the motions of the various planets and the perturbations of one on the other can be quite complicated to work out, and to follow how all those stars in a globular cluster move is quite beyond our ability. It is complicated in its actions, but the basic pattern or the system beneath the whole thing is simple. This is common to all our laws; they all turn out to be simple things, although complex in their actual actions.

In 'The Law of Gravitation, as Example of Physical Law', the first of his Messenger Lectures (1964), Cornell University. Collected in The Character of Physical Law (1967), 33-34.

Look around when you have got your first mushroom or made your first discovery: they grow in clusters.

Man â€¦ begins life as an ambiguous speck of matter which can in no way be distinguished from the original form of the lowest animal or plant. He next becomes a cell; his life is precisely that of the animalcule. Cells cluster round this primordial cell, and the man is so far advanced that he might be mistaken for an undeveloped oyster; he grows still more, and it is clear that he might even be a fish; he then passes into a stage which is common to all quadrupeds, and next assumes a form which can only belong to quadrupeds of the higher type. At last the hour of birth approaches; coiled within the dark womb he sits, the image of an ape; a caricature of the man that is to be. He is born, and for some time he walks only on all fours; he utters only inarticulate sounds; and even in his boyhood his fondness for climbing trees would seem to be a relic of the old arboreal life.

No video, no photographs, no verbal descriptions, no lectures can provide the enchantment that a few minutes out-of-doors can: watch a spider construct a web; observe a caterpillar systematically ravaging the edge of a leaf; close your eyes, cup your hands behind your ears, and listen to aspen leaves rustle or a stream muse about its pools and eddies. Nothing can replace plucking a cluster of pine needles and rolling them in your fingers to feel how theyâ€™re put together, or discovering that â€śsedges have edges and grasses are round,â€ť The firsthand, right-and-left-brain experience of being in the out-of-doors involves all the senses including some weâ€™ve forgotten about, like smelling water a mile away. No teacher, no student, can help but sense and absorb the larger ecological rhythms at work here, and the intertwining of intricate, varied and complex strands that characterize a rich, healthy natural world.

Once the hatch was opened, I turned the lock handle and bright rays of sunlight burst through it. I opened the hatch and dust from the station flew in like little sparklets, looking like tiny snowflakes on a frosty day. Space, like a giant vacuum cleaner, began to suck everything out. Flying out together with the dust were some little washers and nuts that dad got stuck somewhere; a pencil flew by.
My first impression when I opened the hatch was of a huge Earth and of the sense of unreality concerning everything that was going on. Space is very beautiful. There was the dark velvet of the sky, the blue halo of the Earth and fast-moving lakes, rivers, fields and clouds clusters. It was dead silence all around, nothing whatever to indicate the velocity of the flightâ€¦ no wind whistling in your ears, no pressure on you. The panorama was very serene and majestic.

So numerous are the objects which meet our view in the heavens, that we cannot imagine a point of space where some light would not strike the eye;—innumerable stars, thousands of double and multiple systems, clusters in one blaze with their tens of thousands of stars, and the nebulae amazing us by the strangeness of their forms and the incomprehensibility of their nature, till at last, from the limit of our senses, even these thin and airy phantoms vanish in the distance.

The moment one has offered an original explanation for a phenomenon which seems satisfactory, that moment affection for his intellectual child springs into existence, and as the explanation grows into a definite theory his parental affections cluster about his offspring and it grows more and more dear to him. ... There springs up also unwittingly a pressing of the theory to make it fit the facts and a pressing of the facts to make them fit the theory... To avoid this grave danger, the method of multiple working hypotheses is urged. It differs from the simple working hypothesis in that it distributes the effort and divides the affections... In developing the multiple hypotheses, the effort is to bring up into view every rational exploration of the phenomenon in hand and to develop every tenable hypothesis relative to its nature, cause or origin, and to give to all of these as impartially as possible a working form and a due place in the investigation. The investigator thus becomes the parent of a family of hypotheses; and by his parental relations to all is morally forbidden to fasten his affections unduly upon anyone. ... Each hypothesis suggests its own criteria, its own method of proof, its own method of developing the truth, and if a group of hypotheses encompass the subject on all sides, the total outcome of means and of methods is full and rich.

The next object which I have observed is the essence or substance of the Milky Way. By the aid of a telescope anyone may behold this in a manner which so distinctly appeals to the senses that all the disputes which have tormented philosophers through so many ages are exploded at once by the irrefragable evidence of our eyes, and we are freed from wordy disputes upon this subject, for the Galaxy is nothing else but a mass of innumerable stars planted together in clusters.

This discovery [of fullerenes] is principally about the way that carbon condenses, itâ€™s genius for forming clusters.

We then got to Westminster Abbey and, moving about unguided, we found the graves of Newton, Rutherford, Darwin, Faraday, and Maxwell in a cluster.

With every passing hour our solar system comes forty-three thousand miles closer to globular cluster 13 in the constellation Hercules, and still there are some misfits who continue to insist that there is no such thing as progress.