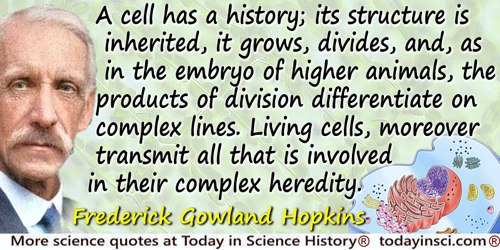 All substances are poisonous, there is none that is not a poison; the right dose differentiates a poison from a remedy.

Although the oceans surface seems at first to be completely homogeneous, after half a month we began to differentiate various seas and even different parts of oceans by their characteristic shades. We were astonished to discover that, during an flight, you have to learn anew not only to look, but also to see. At first the finest nuances of color elude you, but gradually your vision sharpens and your color perception becomes richer, and the planet spreads out before you with all its indescribable beauty.

Each species has evolved a special set of solutions to the general problems that all organisms must face. By the fact of its existence, a species demonstrates that its members are able to carry out adequately a series of general functions.  These general functions offer a framework within which one can integrate ones view of biology and focus ones research. Such a view helps one to avoid becoming lost in a morass of unstructured detaileven though the ways in which different species perform these functions may differ widely. A few obvious examples will suffice. Organisms must remain functionally integrated. They must obtain materials from their environments, and process and release energy from these materials.  They must differentiate and grow, and they must reproduce. By focusing ones questions on one or another of these obligatory and universal capacities, one can ensure that ones research will not be trivial and that it will have some chance of achieving broad general applicability.

Engineering is the art of directing the great sources of power in nature for the use and the convenience of people. In its modern form engineering involves people, money, materials, machines, and energy. It is differentiated from science because it is primarily concerned with how to direct to useful and economical ends the natural phenomena which scientists discover and formulate into acceptable theories. Engineering therefore requires above all the creative imagination to innovate useful applications of natural phenomena. It seeks newer, cheaper, better means of using natural sources of energy and materials.

Had there not been in zoology men who devoted themselves to such seemingly unimportant studies as the differentiation of the species of mosquitoes, we should not have been able to place on a firm foundation the aetiology of malaria and yellow fever.

I should like to call the number of atom groups, with which an elementary atom coordinates  to form a complex radical, the coordination number of the atom in question  We must differentiate between valence number and coordination number. The valence number indicates the maximum number of monovalent atoms which can be bound directly to the atom in question without the participation of other elementary atoms  Perhaps this concept [of coordination number] is destined to serve as a basis for the theory of the constitution of inorganic compounds, just as valence theory formed the basis for the constitutional theory of carbon compounds.

I think its time we recognized the Dark Ages are over. Galileo and Copernicus have been proven right. The world is in fact round; the Earth does revolve around the sun. I believe God gave us intellect to differentiate between imprisoning dogma and sound ethical science, which is what we must do here today.
Debating federal funding for stem cell research as Republican Representative (CT).

If I had to define life in a single phrase, I should clearly express my thought of throwing into relief one characteristic which, in my opinion, sharply differentiates biological science. I should say: life is creation.

From An Introduction to the Study of Experimental Medicine (1865), as translated by Henry Copley Greene (1957), 93.

In due time the evolution theory will have to abate its vehemence, cannot be allowd to dominate everything else, and will have to take its place as a segment of the circle, the clusteras but one of many theories, many thoughts, of profoundest valueand readjusting the differentiating much, yet leaving the divine secrets just as inexplicable and unreachable as beforemaybe more so.

In summary, very large populations may differentiate rapidly, but their sustained evolution will be at moderate or slow rates and will be mainly adaptive. Populations of intermediate size provide the best conditions for sustained progressive and branching evolution, adaptive in its main lines, but accompanied by inadaptive fluctuations, especially in characters of little selective importance. Small populations will be virtually incapable of differentiation or branching and will often be dominated by random inadaptive trends and peculiarly liable to extinction, but will be capable of the most rapid evolution as long as this is not cut short by extinction. 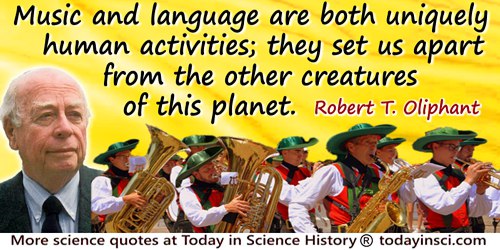 Music and language are both uniquely human activities; they set us apart from the other creatures of this planet.

The most distinctive characteristic which differentiates mathematics from the various branches of empirical science, and which accounts for its fame as the queen of the sciences, is no doubt the peculiar certainty and necessity of its results.

Theory always tends to become abstract as it emerges successfully from the chaos of facts by the processes of differentiation and elimination, whereby the essentials and their connections become recognised, whilst minor effects are seen to be secondary or unessential, and are ignored temporarily, to be explained by additional means.

What is peculiar and new to the [19th] century, differentiating it from all its predecessors, is its technology. It was not merely the introduction of some great isolated inventions. It is impossible not to feel that something more than that was involved.  The process of change was slow, unconscious, and unexpected. In the nineteeth century, the process became quick, conscious, and expected.  The whole change has arisen from the new scientific information. Science, conceived not so much in its principles as in its results, is an obvious storehouse of ideas for utilisation.  Also, it is a great mistake to think that the bare scientific idea is the required invention, so that it has only to be picked up and used. An intense period of imaginative design lies between. One element in the new method is just the discovery of how to set about bridging the gap between the scientific ideas, and the ultimate product. It is a process of disciplined attack upon one difficulty after another This discipline of knowledge applies beyond technology to pure science, and beyond science to general scholarship. It represents the change from amateurs to professionals.  But the full self-conscious realisation of the power of professionalism in knowledge in all its departments, and of the way to produce the professionals, and of the importance of knowledge to the advance of technology, and of the methods by which abstract knowledge can be connected with technology, and of the boundless possibilities of technological advance,the realisation of all these things was first completely attained in the nineteeth century.

Would it sound too presumptuous to speak of perception as a quintessence of sensation, language (that is, communicable thought) of perception, mathematics of language? We should then have four terms differentiating from inorganic matter and from each other the Vegetable, Animal, Rational, and Super-sensual modes of existence.