Acts of creation are ordinarily reserved for gods and poets, but humbler folk may circumvent this restriction if they know how. To plant a pine, for example, one need be neither god nor poet; one need only own a shovel. By virtue of this curious loophole in the rules, any clodhopper may say: Let there be a treeand there will be one.

Animals, even plants, lie to each other all the time, and we could restrict the research to them, putting off the real truth about ourselves for the several centuries we need to catch our breath. What is it that enables certain flowers to resemble nubile insects, or opossums to play dead, or female fireflies to change the code of their flashes in order to attract, and then eat, males of a different species?

In Late Night Thoughts on Listening to Mahler's Ninth Symphony(1984), 131.

Former arbiters of taste must have felt (as so many apostles of traditional values and other highminded tags for restriction and conformity do today) that maintaining the social order required a concept of unalloyed heroism. Human beings so designated as role models had to embody all virtues of the paragonwhich meant, of course, that they could not be described in their truly human and ineluctably faulted form.

It is the constant attempt in this country [Canada] to make fundamental science responsive to the marketplace. Because technology needs science, it is tempting to require that scientific projects be justified in terms of the worth of the technology they can be expected to generate. The effect of applying this criterion is, however, to restrict science to developed fields where the links to technology are most evident. By continually looking for a short-term payoff we disqualify the sort of science that  attempts to answer fundamental questions, and, having answered them, suggests fundamentally new approaches in the realm of applications.

Lakatos realized and admitted that the existing standards of rationality, standards of logic included, were too restrictive and would have hindered science had they been applied with determination. He therefore permitted the scientist to violate them (he admits that science is not rational in the sense of these standards). However, he demanded that research programmes show certain features in the long runthey must be progressive.  I have argued that this demand no longer restricts scientific practice. Any development agrees with it.

Pauling was shocked by the freedom with which the X-ray crystallographers of the time, including particularly Astbury, played with the intimate chemical structure of their models. They seemed to think that if the atoms were arranged in the right order and about the right distance apart, that was all that mattered, that no further restrictions need to be put on them.

Quoted by John Law in 'The Case of X-ray Protein Crystallography', collected in Gerard Lemaine (ed.), Perspectives on the Emergence of Scientific Disciplines, 1976, 140. 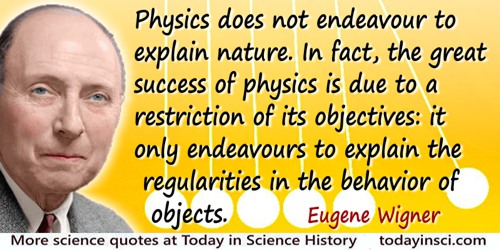 Physics does not endeavour to explain nature. In fact, the great success of physics is due to a restriction of its objectives: it only endeavours to explain the regularities in the behavior of objects.

Progress imposes not only new possibilities for the future but new restrictions.

Science must be free. We can permit no restrictions to be placed upon the scientists right to question, to experiment, and to think. Because America has held liberty above all else, distinguished men of science have come here to live, to work, and to seek new knowledge. The world has been the benefactor and science has moved forward.

Scientists and particularly the professional students of evolution are often accused of a bias toward mechanism or materialism, even though believers in vitalism and in finalism are not lacking among them. Such bias as may exist is inherent in the method of science. The most successful scientific investigation has generally involved treating phenomena as if they were purely materialistic, rejecting any metaphysical hypothesis as long as a physical hypothesis seems possible. The method works. The restriction is necessary because science is confined to physical means of investigation and so it would stultify its own efforts to postulate that its subject is not physical and so not susceptible to its methods.

The Meaning of Evolution: A Study of the History of Life and of its Significance for Man (1949), 127.

Suppose we divide the space into little volume elements. If we have black and white molecules, how many ways could we distribute them among the volume elements so that white is on one side and black is on the other? On the other hand, how many ways could we distribute them with no restriction on which goes where? Clearly, there are many more ways to arrange them in the latter case. We measure disorder by the number of ways that the insides can be arranged, so that from the outside it looks the same. The logarithm of that number of ways is the entropy. The number of ways in the separated case is less, so the entropy is less, or the disorder is less.

When a conjecture inspires new hopes or creates new fears, action is indicated. There is an important asymmetry between hope, which leads to actions that will test its basis, and fear, which leads to restriction of options frequently restricting testing of the basis for the fear. As we know only too well, many of our hopes do not survive their tests. However, fears accumulate untested. Our inventory of untested fears has always made humanity disastrously vulnerable to thought control. While science was independent of politics, its greatest triumph was the reduction of that vulnerability.