...they have never affirm'd any thing, concerning the Cause, till the Trial was past: whereas, to do it before, is a most venomous thing in the making of Sciences; for whoever has fix'd on his Cause, before he experimented; can hardly avoid fitting his Experiment to his Observations, to his own Cause, which he had before imagin'd; rather than the Cause to the Truth of the Experiment itself.
Referring to experiments of the Aristotelian mode, whereby a preconceived truth would be illustrated merely to convince people of the validity of the original thought.

A mind not wholly wishful to reach the truth, or to rest it in or obey it when found, is to that extent a mind impervious to truth an incapable of unbiased belief.

Access to more information isnt enoughthe information needs to be correct, timely, and presented in a manner that enables the reader to learn from it. The current network is full of inaccurate, misleading, and biased information that often crowds out the valid information. People have not learned that popular or available information is not necessarily valid.

Response to the Pew Research Center survey question, Is Google making us stupid? Posted 19 Feb 2010 on page 'Future of the Internet IV' at pewinternet.org website.

All historians, even the most scientific, have bias, if in no other sense than the determination not to have any.

In Everyman His Own Historian (1935), 136. The book is expanded from his presidential address (1931) to the American Historical Association.

As to the Christian religion, Sir,  there is a balance in its favor from the number of great men who have been convinced of its truth after a serious consideration of the question. Grotius was an acute man, a lawyer, a man accustomed to examine evidence, and he was convinced. Grotius was not a recluse, but a man of the world, who surely had no bias on the side of religion. Sir Isaac Newton set out an infidel, and came to be a very firm believer.

Bias has to be taught. If you hear your parents downgrading women or people of different backgrounds, why, you are going to do that.

Changes That Have Occurred in the Globe: When we have seen with our own eyes a mountain progressing into a plain; that is to say, an immense boulder separating from this mountain and covering the fields; an entire castle broken into pieces over the ground; a river swallowed up which then bursts out from its abyss; clear marks of a vast amount of water having once flooded regions now inhabited, and a hundred vestiges of other transformations, then we are much more willing to believe that great changes altered the face of the earth, than a Parisian lady who knows only that the place where her house was built was once a cultivated field. However, a lady from Naples who has seen the buried ruins of Herculaneum, is much less subject to the bias which leads us to believe that everything has always been as it is today.

His [Henry Cavendishs] Theory of the Universe seems to have been, that it consisted solely of a multitude of objects which could be weighed, numbered, and measured; and the vocation to which he considered himself called was, to weigh, number and measure as many of those objects as his allotted three-score years and ten would permit. This conviction biased all his doings, alike his great scientific enterprises, and the petty details of his daily life.

In George Wilson, The Life of the Honourable Henry Cavendish: Including the Abstracts of his Important Scientific Papers (1851), 186.

I had an immense advantage over many others dealing with the problem inasmuch as I had no fixed ideas derived from long-established practice to control and bias my mind, and did not suffer from the general belief that whatever is, is right.

In attempting to explain geological phenomena, the bias has always been on the wrong side; there has always been a disposition to reason á priori on the extraordinary violence and suddenness of changes, both in the inorganic crust of the earth, and in organic types, instead of attempting strenuously to frame theories in accordance with the ordinary operations of nature.

In my own view, some advice about what should be known, about what technical education should be acquired, about the intense motivation needed to succeed, and about the carelessness and inclination toward bias that must be avoided is far more useful than all the rules and warnings of theoretical logic.

It is a capital mistake to theorize before you have all the evidence. It biases the judgment.

It is the province of prejudice to blind; and scientific writers, not less than others, write to please, as well as to instruct, and even unconsciously to themselves, (sometimes), sacrifice what is true to what is popular.

Kant, discussing the various modes of perception by which the human mind apprehends nature, concluded that it is specially prone to see nature through mathematical spectacles. Just as a man wearing blue spectacles would see only a blue world, so Kant thought that, with our mental bias, we tend to see only a mathematical world.

Nature is objective, and nature is knowable, but we can only view her through a glass darklyand many clouds upon our vision are of our own making: social and cultural biases, psychological preferences, and mental limitations (in universal modes of thought, not just individualized stupidity). 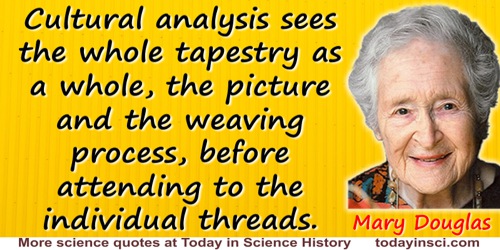 Our ultimate task is to find interpretative procedures that will uncover each bias and discredit its claims to universality. When this is done the eighteenth century can be formally closed and a new era that has been here a long time can be officially recognised. The individual human being, stripped of his humanity, is of no use as a conceptual base from which to make a picture of human society. No human exists except steeped in the culture of his time and place. The falsely abstracted individual has been sadly misleading to Western political thought. But now we can start again at a point where major streams of thought converge, at the other end, at the making of culture. Cultural analysis sees the whole tapestry as a whole, the picture and the weaving process, before attending to the individual threads.

Scientists and particularly the professional students of evolution are often accused of a bias toward mechanism or materialism, even though believers in vitalism and in finalism are not lacking among them. Such bias as may exist is inherent in the method of science. The most successful scientific investigation has generally involved treating phenomena as if they were purely materialistic, rejecting any metaphysical hypothesis as long as a physical hypothesis seems possible. The method works. The restriction is necessary because science is confined to physical means of investigation and so it would stultify its own efforts to postulate that its subject is not physical and so not susceptible to its methods.

The Meaning of Evolution: A Study of the History of Life and of its Significance for Man (1949), 127.

Scientists are humanthey're as biased as any other group. But they do have one great advantage in that science is a self-correcting process.

We may fondly imagine that we are impartial seekers after truth, but with a few exceptions, to which I know that I do not belong, we are influencedand sometimes stronglyby our personal bias; and we give our best thoughts to those ideas which we have to defend.