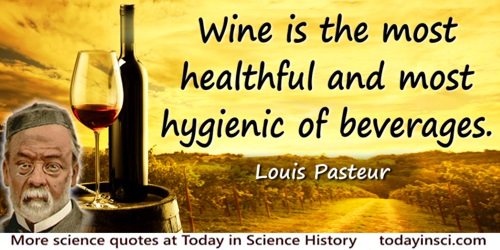 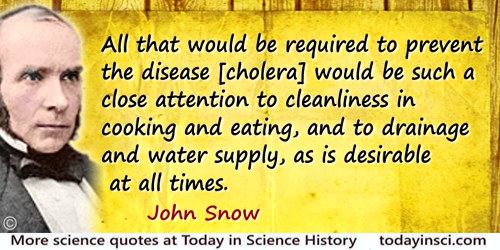 All that would be required to prevent the disease [cholera] would be such a close attention to cleanliness in cooking and eating, and to drainage and water supply, as is desirable at all times.

Disease is largely a removable evil. It continues to afflict humanity, not only because of incomplete knowledge of its causes and lack of individual and public hygiene, but also because it is extensively fostered by harsh economic and industrial conditions and by wretched housing in congested communities. ... The reduction of the death rate is the principal statistical expression and index of human social progress. It means the saving and lengthening of lives of thousands of citizens, the extension of the vigorous working period well into old age, and the prevention of inefficiency, misery, and suffering. These advances can be made by organized social effort. Public health is purchasable. (1911)

Hygiene is the corruption of medicine by morality. It is impossible to find a hygienist who does not debase his theory of the healthful with a theory of the virtuous. 3. The aim of medicine is surely not to make men virtuous; it is to safeguard them from the consequences of their vices.

I came from Paris in the Spring of 1884, and was brought in intimate contact with him [Thomas Edison]. We experimented day and night, holidays not excepted. His existence was made up of alternate periods of work and sleep in the laboratory. He had no hobby, cared for no sport or amusement of any kind and lived in utter disregard of the most elementary rules of hygiene. There can be no doubt that, if he had not married later a woman of exceptional intelligence, who made it the one object of her life to preserve him, he would have died many years ago from consequences of sheer neglect. So great and uncontrollable was his passion for work. 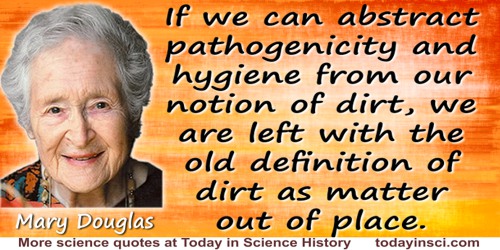 If we can abstract pathogenicity and hygiene from our notion of dirt, we are left with the old definition of dirt as matter out of place. This is a very suggestive approach. It implies two conditions: a set of ordered relations and a contravention of that order. Dirt then, is never a unique, isolated event.

It is possible to read books on Natural History with intelligence and profit, and even to make good observations, without a scientific groundwork of biological instruction; and it is possible to arrive at empirical facts of hygiene and medical treatment without any physiological instruction. But in all three cases the absence of a scientific basis will render the knowledge fragmentary and incomplete; and this ought to deter every one from offering an opinion on debatable questions which pass beyond the limit of subjective observations. The psychologist who has not prepared himself by a study of the organism has no more right to be heard on the genesis of the psychical states, or of the relations between body and mind, than one of the laity has a right to be heard on a question of medical treatment.

Logic is the hygiene the mathematician practices to keep his ideas healthy and strong.

Mathematicians create by acts of insight and intuition. Logic then sanctions the conquests of intuition. It is the hygiene that mathematics practices to keep its ideas healthy and strong. Moreover, the whole structure rests fundamentally on uncertain ground, the intuition of humans. Here and there an intuition is scooped out and replaced by a firmly built pillar of thought; however, this pillar is based on some deeper, perhaps less clearly defined, intuition. Though the process of replacing intuitions with precise thoughts does not change the nature of the ground on which mathematics ultimately rests, it does add strength and height to the structure.

The first possibility of rural cleanliness lies in water supply.

Letter to the Medical Officer of Health (Nov 1891)

They say it doesnt matter how long one washes ones hands, because there will still be organisms in the sweat glands and hair follicles, so I rub my hands with Vaseline.

Wine is the most healthful and most hygienic of beverages.