Finally, in regard to those who possess the largest shares in the stock of worldly goods, could there, in your opinion, be any police so vigilant and effetive, for the protections of all the rights of person, property and character, as such a sound and comprehensive education and training, as our system of Common Schools could be made to impart; and would not the payment of a sufficient tax to make such education and training universal, be the cheapest means of self-protection and insurance?

Higher energy prices act like a tax. They reduce the disposable income people have available for other things.

From response to a question about the effect on the economy of rising oil and gasoline prices. In transcript, 'Treasury Secretary Snow Optimistic on Economy', PBS Newshour (23 Mar 2005), on pbs.org website.

I suspect that the most important effect of World War II on physical science lay in the change in the attitude of people to science. The politicians and the public were convinced that science was useful and were in no position to argue about the details. A professor of physics might be more sinister than he was in the 1930s, but he was no longer an old fool with a beard in a comic-strip. The scientists or at any rate the physicists, had changed their attitude. They not only believed in the interest of science for themselves, they had acquired also a belief that the tax-payer should and would pay for it and would, in some unspecified length of run, benefit by it.

'The Effect of World War II on the Development of Knowledge in the Physical Sciences', Proceedings of the Royal Society of London, 1975, Series A, 342, 532.

In Institutions of a lower grade [secondary schools], it [geology] receives far less attention than its merits deserve. Why should not a science, whose facts possess a thrilling interest; whose reasonings are admirably adapted for mental discipline, and often severely tax the strongest powers; and whose results are, many of them, as grand and ennobling as those of Astronomy itself;  why should not such a science be thought as essential in education as the kindred branches of Chemistry and Astronomy?

It is quite possible that mathematics was invented in the ancient Middle East to keep track of tax receipts and grain stores. How odd that out of this should come a subtle scientific language that can effectively describe and predict the most arcane aspects of the Universe.

Epigraph in Isaac Asimovs Book of Science and Nature Quotations (1988), 265.

Like taxes, radioactivity has long been with us and in increasing amounts; it is not to be hated and feared, but accepted and controlled. Radiation is dangerous, let there be no mistake about that—but the modern world abounds in dangerous substances and situations too numerous to mention. ... Consider radiation as something to be treated with respect, avoided when practicable, and accepted when inevitable.
Recommending the same view towards radiation as the risks of automobile travel.

Making out an income tax is a lesson in mathematics: addition, division, multiplication and extraction.

Our new Constitution is now established, and has an appearance that promises permanency; but in this world nothing can be said to be certain, except death and taxes.

Science has increased our lifespan considerably. Now we can look forward to paying our taxes at least ten years longer.

The Eiffel Tower is the Empire State Building after taxes.

The hardest thing to understand in the world is the income tax.

The individual on his own is stable only so long as he is possessed of self-esteem. The maintenance of self-esteem is a continuous task which taxes all of the individuals powers and inner resources. We have to prove our worth and justify our existence anew each day. When, for whatever reason, self-esteem is unattainable, the autonomous individual becomes a highly explosive entity. He turns away from an unpromising self and plunges into the pursuit of pridethe explosive substitute for self-esteem. All social disturbances and upheavals have their roots in crises of individual self-esteem, and the great endeavor in which the masses most readily unite is basically a search for pride.

There is just one thing I can promise you about the outer-space program: Your tax dollar will go farther.

Thinking is one thing no one has ever been able to tax.

This king [Sesostris] divided the land among all Egyptians so as to give each one a quadrangle of equal size and to draw from each his revenues, by imposing a tax to be levied yearly. But everyone from whose part the river tore anything away, had to go to him to notify what had happened; he then sent overseers who had to measure out how much the land had become smaller, in order that the owner might pay on what was left, in proportion to the entire tax imposed. In this way, it appears to me, geometry originated, which passed thence to Hellas.

Water at command, by turning a tap and paying a tax, is more convenient than carrying it from a free spring.

We claim to be more moral than other nations, and to conquer and govern and tax and plunder weaker peoples for their good! While robbing them we actually claim to be benefactors! And then we wonder, or profess to wonder, why other Governments hate us! Are they not fully justified in hating us? Is it surprising that they seek every means to annoy us, that they struggle to get navies to compete with us, and look forward to a time when some two or three of them may combine together and thoroughly humble and cripple us? And who can deny that any just Being, looking at all the nations of the earth with impartiality and thorough knowledge, would decide that we deserve to be humbled, and that it might do us good?

Weeds function as an unseen tax on the crop harvest. 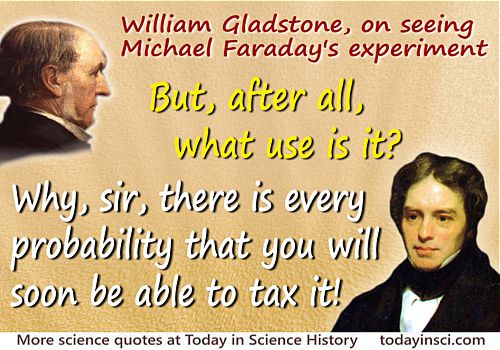 Why, sir, there is every probability that you will soon be able to tax it!
Said to William Gladstone, the Chancellor of the Exchequer, when he asked about the practical worth of electricity.

[In] death at least there would be one profit; it would no longer be necessary to eat, to drink, to pay taxes, or to [offend] others; and as a man lies in his grave not one year, but hundreds and thousands of years, the profit was enormous. The life of man was, in short, a loss, and only his death a profit.

[The body of law] has taxed the deliberative spirit of ages. The great minds of the earth have done it homage. It was the fruit of experience. Under it men prospered, all the arts flourished, and society stood firm. Every right and duty could be understood because the rules regulating each had their foundation in reason, in the nature and fitness of things; were adapted to the wants of our race, were addressed to the mind and to the heart; were like so many scraps of logic articulate with demonstration. Legislation, it is true occasionally lent its aid, but not in the pride of opinion, not by devising schemes inexpedient and untried, but in a deferential spirit, as a subordinate co-worker.