Michael Faraday - You will soon be able to tax it! 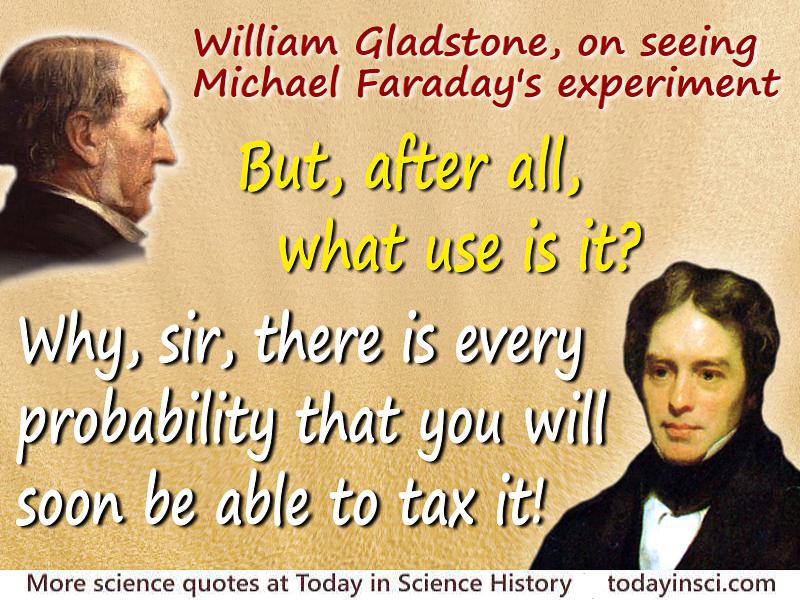 “Why, sir, there is every probability that you will soon be able to tax it!”
— Michael Faraday
As quoted in W.E.H. Lecky, Democracy and Liberty (1899).

This is how the quote in given by W.E.H. Lecky in the Introduction to the 1899 edition of his book, Democracy and Liberty. Lecky gives much biographical material about Sir William Gladstone (1809-1898), who became the British Chancellor of the Exchequer, responsible for the national budget. He presented his first budget in Apr 1853, with its expenditures and taxes. Later, because of the increasing cost of fighting the Crimean  War, Gladstone increased the income tax rate from 7% to 10½%.

Although Gladstone was diligent in matters concerned with his work, Lecky contrasts that, “There were, it is true, wide tracts of knowledge with which he had no sympathy. The whole great field of modern scientific discovery seemed out of his range.” To illustrate this, Lecky continues:

An intimate friend of Faraday once described to me how, when Faraday was endeavouring to explain to Gladstone and several others an important new discovery in science Gladstone’s only commentary was ‘but, after all, what use is it?” ‘Why, sir,’ replied Faraday, ‘there is every probability that you will soon be able to tax it!’”

Thus, one should note that although Lecky used quotation marks, the words are given as a recollection, written third-hand, some time after the original conversation between Gladstone and Faraday.

Also, Lecky did not specify which “new discovery.” Yet in later retellings it is given as electricity. So note this was not specified in the original text, and, unless there is another source of which Webmaster is not aware, it would be an assumption when recent quote collections refer to electricity. Of course, Faraday's major investigations involved electricity and electromagnetism, so the implication is not unreasonable.

There are no extant writings of Faraday himself, nor his contemporaries, on this matter, so the authenticity of the quote can only be judged from the context given above, a third-hand account. For this reason, it could be labelled as possibly apocryphal.1

Among the various wordings and citations of the quote in recent publications, Faraday is asked by the “Prime Minister.” It is true that Gladstone held that office four times, the first in 1868, the year after Faraday's death. Some writers take that conflict of timing as evidence that the conversation could not have been taken place.2 However Lecky’s account does not refer to Gladstone as being Prime Minister at the time. Which leaves Lecky’s statement of the quote as being possible, since Gladstone was Chancellor of the Exchequer during Faraday’s lifetime.