Michael Faraday
“I am jealous of the term atom” 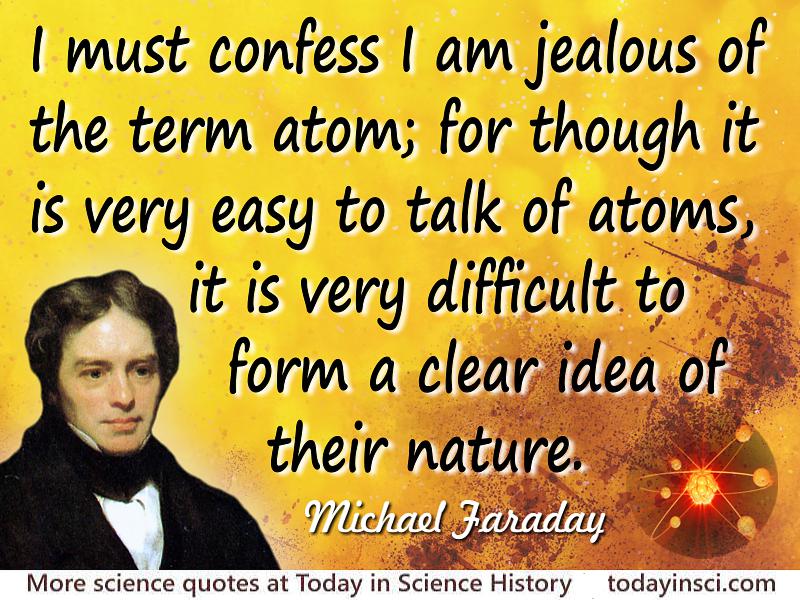 “But I must confess I am jealous of the term atom; for though it is very easy to talk of atoms, it is very difficult to form a clear idea of their nature…”
— Michael Faraday
In Faraday’s Experimental Researches in Electricity (1833)

In one of Faraday’s many papers on his electrical experiments at the Royal Institution, in one dated 31 Dec 1833, he reports on measurements made during the the electrolysis of water, and considered “how the water is decomposed.” For this he considers his results in terms of “the atomic theory or phraseology,” after which, he comments:

But I must confess I am jealous of the term atom; for though it is very easy to talk of atoms, it is very difficult to form a clear idea of their nature, especially when compounded bodies are under consideration.

Aside—While reading the paper, Webmaster noted that Faraday recorded collecting 12.5 cubic inches of gas at a temperature of 52º and a pressure of 29.2 inches. He then corrected for temperature, pressure and moisture to calculate that the gas volume would be 12.15453 cubic inches of dry hydrogen at mean temperature and pressure. Together with the volume of oxygen evolved, he calculated the weight of water decomposed to be 2.3535544 grains. From an initial measurement with three significant figures (or two for the temperature), he calculated a result to eight significant figures! Yikes! And all this before the seductive LED displays of arithmetic number-crunching on today's electronic calculators! (As any high school student now knows—or darn well ought to know—lab results calculated by multiplication have no physical meaning beyond the smallest number of significant figures in the original data measurements.)