Published in The Times

[In the mid-19th century, before the great engineering scheme by Sir Joseph Bazalgette provided sewers across the city of London, increasing amounts of raw sewage and waste had been dumped into the River Thames, causing extreme pollution. Benjamin Disraeli called it the “Stygian Pool.” Finally the politicians in the Houses of Parliament, built beside the River, suffered a stench that made the building uninhabitable. They finally took action in 1858, and authorized Bazelgette to fix the “The Great Stink.” The problem had been growing for years, and the newpapers had carried editorials and columns of indignant correspondence from men of influence. The respected scientist, Michael Faraday, wrote this letter in 1855 describing the serious pollution, which was republished in various periodicals.] 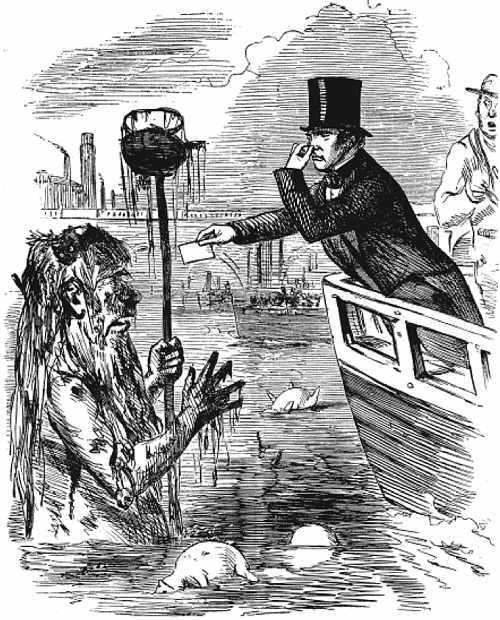 FARADAY GIVING HIS CARD TO FATHER THAMES;
And we hope the Dirty Fellow will consult the learned Professor
Punch (21 Jul 1855) (source)

Sir,—I traversed this day by steamboat the space between London and Hungerford Bridges, between half-past one and two o'clock. It was low water, and I think the tide must have been near the turn. The appearance and smell of the water forced themselves at once on my attention. The whole of the river was an opaque pale brown fluid. In order to test the degree of opacity, I tore up some white cards into pieces, and then moistened them, so as to make them sink easily below the surface, and then dropped some of these pieces into the water at every pier the boat came to. Before they had sunk an inch below the surface they were undistinguishable, though the sun shone brightly at the time, and when the pieces fell edgeways the lower part was hidden from sight before the upper part was under water.

This happened at St. Paul's Wharf, Blackfriars Bridge, Temple Wharf, Southwark Bridge, and Hungerford, and I have no doubt would have occurred further up and down the river. Near the bridges the feculence rolled up in clouds so dense that they were visible at the surface even in water of this kind.

The smell was very bad, and common to the whole of the water. It was the same as that which now comes up from the gully holes in the streets. The whole river was for the time a real sewer. Having just returned from the country air, I was perhaps more affected by it than others; but I do not think that I could have gone on to Lambeth or Chelsea, and I was glad to enter the streets for an atmosphere which, except near the sink-holes, I found much sweeter than on the river.

I have thought it a duty to record these facts, that they may be brought to the attention of those who exercise power, or have responsibility in relation to the condition of our river. There is nothing figurative in the words I have employed, or any approach to exaggeration. They are the simple truth.

If there be sufficient authority to remove a putrescent pond from the neighbourhood of a few simple dwellings, surely the river which flows for so many miles through London ought not to be allowed to become a fermenting sewer. The condition in which I saw the Thames may perhaps be considered as exceptional, but it ought to be an impossible state; instead of which, I fear it is rapidly becoming the general condition. If we neglect this subject, we cannot expect to do so with impunity; nor ought we to be surprised if, ere many years are over, a season give us sad proof of the folly of our carelessness.

I am, Sir, your obedient servant,