... in time of war, soldiers, however sensible, care a great deal more on some occasions about slaking their thirst than about the danger of enteric fever.
[Better known as typhoid, the disease is often spread by drinking contaminated water.]

Parliamentaray Debate (21 Mar 1902). Quoted in Winston Churchill and Richard Langworth (ed.), Churchill by Himself: The Definitive Collection of Quotations (2008), 469.

SIR TOBY: Does not our lives consist of the four elements?
SIR ANDREW: Faith, so they say; but I think it rather consists of eating and drinking.
SIR TOBY: Thou'rt a scholar; let us therefore eat and drink. 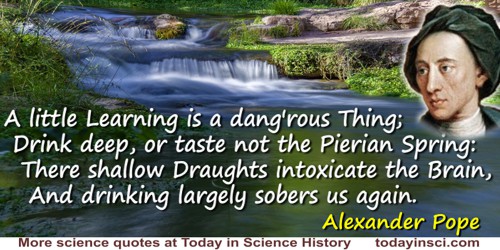 A little Learning is a dangrous Thing;
Drink deep, or taste not the Pierian Spring:
There shallow Draughts intoxicate the Brain,
And drinking largely sobers us again.

In An Essay on Criticism (Written 1709, published 1711), 14. (Written in 1709). Misquoted in The Monthly Miscellany; or Gentleman and Ladys Complete Magazine (1774), as Mr. Pope says, very truly, A little knowledge is a dangerous thing. This latter version of the quote has, in modern times, been misattributed to Albert Einstein.

Electricity is actually made up of extremely tiny particles called electrons, that you cannot see with the naked eye unless you have been drinking.

In The Taming of the Screw: How to Sidestep Several Million Homeowner's Problems (1983), 12.

I complained to Mr. Johnson that I was much afflicted with melancholy, which was hereditary in our family. He said that he himself had been greatly distressed with it, and for that reason had been obliged to fly from study and meditation to the dissipating variety of life. He advised me to have constant occupation of mind, to take a great deal of exercise, and to live moderately; especially to shun drinking at night. Melancholy people, said he, are apt to fly to intemperance, which gives a momentary relief but sinks the soul much lower in misery. He observed that laboring men who work much and live sparingly are seldom or never troubled with low spirits.

I would liken science and poetry in their natural independence to those binary stars, often different in colour, which Herschels telescope discovered to revolve round each other. There is one light of the sun, says St. Paul, and another of the moon, and another of the stars: star differeth from star in glory. It is so here. That star or sun, for it is both, with its cold, clear, white light, is SCIENCE: that other, with its gorgeous and ever-shifting hues and magnificent blaze, is POETRY. They revolve lovingly round each other in orbits of their own, pouring forth and drinking in the rays which they exchange; and they both also move round and shine towards that centre from which they came, even the throne of Him who is the Source of all truth and the Cause of all beauty.

'The Alleged Antagonism between Poetry and Chemistry.' In Jesse Aitken Wilson, Memoirs of George Wilson. Quoted in Natural History Society of Montreal, 'Reviews and Notices of Books,' The Canadian Naturalist and Geologist (1861) Vol. 6, 393.

If you resolve to give up smoking, drinking and loving, you don't actually live longer; it just seems that way.

In the moonlight
While drinking homemade wine
My sorrow hung heavy
And my heart felt like lead.
The moon was golden yellow
The night soft and mellow.
There was a smell of jasmine
All around.
And I felt the weight of the world
Upon my shoulders.
I looked at the twinkling stars in the sky
So far and wide
Heres to you
I lifted my wine
And my eyes looked upon the brilliance
Of the moon and stars
From afar...

It is the man of science, eager to have his every opinion regenerated, his every idea rationalised, by drinking at the fountain of fact, and devoting all the energies of his life to the cult of truth, not as he understands it, but as he does not understand it, that ought properly to be called a philosopher. To an earlier age knowledge was powermerely that and nothing moreto us it is life and the summum bonum.

As quoted in Sir Richard Gregory, Discovery: Or, The Spirit and Service of Science (1916), 24.

Man is an eating animal, a drinking animal, and a sleeping animal, and one placed in a material world, which alone furnishes all the human animal can desire. He is gifted besides with knowing faculties, practically to explore and to apply the resources of this world to his use. These are realities. All else is nothing; conscience and sentiment are mere figments of the imagination. Man has but five gates of knowledge, the five senses; he can know nothing but through them; all else is a vain fancy, and as for the being of a God, the existence of a soul, or a world to come, who can know anything about them? Depend upon it, my dear madam, these are only the bugbears by which men of sense govern fools.

Our studies have shown that all cases of typhoid of this type have arisen by contact, that is, carried directly from one person to another. There was no trace of a connection to drinking water.

POTABLE, n. Suitable for drinking. Water is said to be potable; indeed, some declare it our natural beverage, although even they find it palatable only when suffering from the recurrent disorder known as thirst, for which it is a medicine. Upon nothing has so great and diligent ingenuity been brought to bear in all ages and in all countries, except the most uncivilized, as upon the invention of substitutes for water. To hold that this general aversion to that liquid has no basis in the preservative instinct of the race is to be unscientificand without science we are as the snakes and toads.

Radiation, unlike smoking, drinking, and overeating, gives no pleasure, so the possible victims object.

The Astronomers Drinking Song
Astronomers! What can avail
Those who calumniate us;
Experiment can never fail
With such an apparatus

A Budget of Paradoxes

The drinking of litharge causes oppression of the stomach, belly and intestines, with intense griping pains; it suppresses the urine, while the body swells and acquires an unsightly leaden hue.

What would life be without art? Science prolongs life. To consist of what—eating, drinking, and sleeping? What is the good of living longer if it is only a matter of satisfying the requirements that sustain life? All this is nothing without the charm of art.

When you think about flying, its nuts really. Here you are at about 40,000 feet, screaming along at 700 miles an hour and youre sitting there drinking Diet Pepsi and eating peanuts. It just doesnt make any sense.

[In] death at least there would be one profit; it would no longer be necessary to eat, to drink, to pay taxes, or to [offend] others; and as a man lies in his grave not one year, but hundreds and thousands of years, the profit was enormous. The life of man was, in short, a loss, and only his death a profit.

[Smoking is] a dirty habit that should be banned from America by the Government, instead of moderate alcoholic drinking.

As quoted by Gobind Behari Lal, Universal Service Science Editor, as printed in Syracuse Journal (13 Jan 1933), 4. At the time, there was Prohibition of alcoholic drinks in America. Piccard was interviewed in New York on his arrival from Brussels onboard the Champlain by newspaper and motion picture men. Because he was so vigorously opposed to smoking, he required that nobody smoked during the interview in the childrens dining room.