A mile and a half from town, I came to a grove of tall cocoanut trees, with clean, branchless stems reaching straight up sixty or seventy feet and topped with a spray of green foliage sheltering clusters of cocoanuts—not more picturesque than a forest of colossal ragged parasols, with bunches of magnified grapes under them, would be. I once heard a grouty northern invalid say that a cocoanut tree might be poetical, possibly it was; but it looked like a feather-duster struck by lightning. I think that describes it better than a picture—and yet, without any question, there is something fascinating about a cocoanut tree—and graceful, too.

Can one think that because we are engineers, beauty does not preoccupy us or that we do not try to build beautiful, as well as solid and long lasting structures? Arent the genuine functions of strength always in keeping with unwritten conditions of harmony?  Besides, there is an attraction, a special charm in the colossal to which ordinary theories of art do not apply.

Endowed with two qualities, which seemed incompatible with each other, a volcanic imagination and a pertinacity of intellect which the most tedious numerical calculations could not daunt, Kepler conjectured that the movements of the celestial bodies must be connected together by simple laws, or, to use his own expression, by harmonic laws. These laws he undertook to discover. A thousand fruitless attempts, errors of calculation inseparable from a colossal undertaking, did not prevent him a single instant from advancing resolutely toward the goal of which he imagined he had obtained a glimpse. Twenty-two years were employed by him in this investigation, and still he was not weary of it! What, in reality, are twenty-two years of labor to him who is about to become the legislator of worlds; who shall inscribe his name in ineffaceable characters upon the frontispiece of an immortal code; who shall be able to exclaim in dithyrambic language, and without incurring the reproach of anyone, The die is cast; I have written my book; it will be read either in the present age or by posterity, it matters not which; it may well await a reader, since God has waited six thousand years for an interpreter of his words.

England and all civilised nations stand in deadly peril of not having enough to eat. As mouths multiply, food resources dwindle. Land is a limited quantity, and the land that will grow wheat is absolutely dependent on difficult and capricious natural phenomena... I hope to point a way out of the colossal dilemma. It is the chemist who must come to the rescue of the threatened communities. It is through the laboratory that starvation may ultimately be turned into plenty... The fixation of atmospheric nitrogen is one of the great discoveries, awaiting the genius of chemists.

Presidential Address to the British Association for the Advancement of Science 1898. Published in Chemical News, 1898, 78, 125.

Herschel removed the speckled tent-roof from the world and exposed the immeasurable deeps of space, dim-flecked with fleets of colossal suns sailing their billion-leagued remoteness.

It is tempting to wonder if our present universe, large as it is and complex though it seems, might not be merely the result of a very slight random increase in order over a very small portion of an unbelievably colossal universe which is virtually entirely in heat-death. Perhaps we are merely sliding down a gentle ripple that has been set up, accidently and very temporarily, in a quiet pond, and it is only the limitation of our own infinitesimal range of viewpoint in space and time that makes it seem to ourselves that we are hurtling down a cosmic waterfall of increasing entropy, a waterfall of colossal size and duration.

Jesus is too colossal for the pen of phrasemongers, however artful. No man can dispose of Christianity with a bon mot. 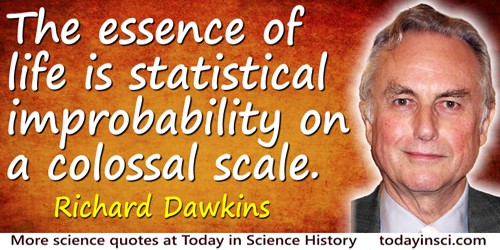 The essence of life is statistical improbability on a colossal scale.

In The Blind Watchmaker: Why the Evidence of Evolution Reveals a Universe Without Design (1986), 317.

The living being is stable. It must be so in order not to be destroyed, dissolved, or disintegrated by the colossal forces, often adverse, which surround it. By apparent contradiction it maintains its stability only if it is excitable and capable of modifying itself according to external stimuli and adjusting its response to the stimulation. In a sense it is stable because it is modifiablethe slight instability is the necessary condition for the true stability of the organism.

The stakes are immense, the task colossal, the time is short. But we may hopewe must hopethat mans own creation, mans own genius, will not destroy him. Scholars, indeed all men, must move forward in the faith of that philosopher who held that there is no problem the human reason can propound which the human reason cannot reason out.

There is an attraction and a charm inherent in the colossal that is not subject to ordinary theories of art  The tower will be the tallest edifice ever raised by man. Will it therefore be imposing in its own way?

Whatever may happen to the latest theory of Dr. Einstein, his treatise represents a mathematical effort of overwhelming proportions. It is the more remarkable since Einstein is primarily a physicist and only incidentally a mathematician. He came to mathematics rather of necessity than by predilection, and yet he has here developed mathematical formulae and calculations springing from a colossal knowledge.

Without the suitable conditions life could not exist. But both life and its conditions set forth the operations of inscrutable Power. We know not its origin; we know not its end. And the presumption, if not the degradation, rests with those who place upon the throne of the universe a magnified image of themselves, and make its doings a mere colossal imitation of their own.

[Thomas Henry] Huxley, I believe, was the greatest Englishman of the Nineteenth Centuryperhaps the greatest Englishman of all time. When one thinks of him, one thinks inevitably of such men as Goethe and Aristotle. For in him there was that rich, incomparable blend of intelligence and character, of colossal knowledge and high adventurousness, of instinctive honesty and indomitable courage which appears in mankind only once in a blue moon. There have been far greater scientists, even in England, but there has never been a scientist who was a greater man.

'Thomas Henry Huxley.' In the Baltimore Evening Sun (4 May 1925). Reprinted in A Second Mencken Chrestomathy: A New Selection from the Writings of America's Legendary Editor, Critic, and Wit (2006), 157.