Conferences with open attendance are very important for the stimulation of young people or other people who are new in the field.  The field of high-energy physics is, as you know, very strongly in the hands of a clique and it is hard for an outsider to enter.

During this [book preparation] time attacks have not been wantingwe must always be prepared for them. If they grow out of a scientific soil, they cannot but be useful, by laying bare weak points and stimulating to their correction; but if they proceed from that soil, from which the lilies of innocence and the palms of conciliation should spring up, where, however, nothing but the marsh-trefoil of credulity and the poisonous water-hemlock of calumniation grow, they deserve no attention. 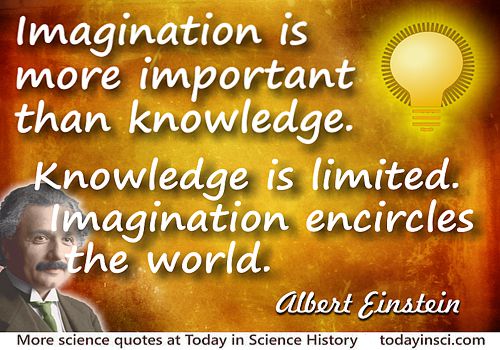 I believe in intuition and inspiration. Imagination is more important than knowledge. For knowledge is limited, whereas imagination embraces the entire world, stimulating progress, giving birth to evolution. It is, strictly speaking, a real factor in scientific research.

In general, a fact is worth more than theories in the long run. The theory stimulates, but the fact builds. The former in due time is replaced by one better but the fact remains and becomes fertile.

In mathematics two ends are constantly kept in view: First, stimulation of the inventive faculty, exercise of judgment, development of logical reasoning, and the habit of concise statement; second, the association of the branches of pure mathematics with each other and with applied science, that the pupil may see clearly the true relations of principles and things.

In 'Aim of the Mathematical Instruction', International Commission on Teaching of Mathematics, American Report: United States Bureau of Education: Bulletin 1912, No. 4, 7.

It is almost a miracle that modern teaching methods have not yet entirely strangled the holy curiousity of inquiry; for what this delicate little plant needs more than anything, besides stimulation, is freedom.

Id like the [Cosmos] series to be so visually stimulating that somebody who isnt even interested in the concepts will just watch for the effects. And Id like people who are prepared to do some thinking to be really stimulated.

Pavlovs data on the two fundamental antagonistic nervous processesstimulation and inhibitionand his profound generalizations regarding them, in particular, that these processes are parts of a united whole, that they are in a state of constant conflict and constant transition of the one to the other, and his views on the dominant role they play in the formation of the higher nervous activityall those belong to the most established naturalscientific validation of the Marxist dialectal method. They are in complete accord with the Leninist concepts on the role of the struggle between opposites in the evolution, the motion of matter.

The climate of Colorado contains more of the essential elements which effectively promote health than that of any other country. These requisites are found in the chemical composition of the atmosphere; in the dry, pure, clean, soft, yet stimulating breezes which quicken circulation and multiply the corpuscles of the blood; in the tonic effect and exhilarating influence of the ozone; in the flood of its life-giving germ-destroying sunshine

The living being is stable. It must be so in order not to be destroyed, dissolved, or disintegrated by the colossal forces, often adverse, which surround it. By apparent contradiction it maintains its stability only if it is excitable and capable of modifying itself according to external stimuli and adjusting its response to the stimulation. In a sense it is stable because it is modifiablethe slight instability is the necessary condition for the true stability of the organism.

The mathematician knows that he owes to the natural sciences his most important stimulations.

The night before Easter Sunday of that year (1920) I awoke, turned on the light, and jotted down a few notes on a tiny slip of thin paper. Then I fell asleep again. It occurred to me at six oclock in the morning that during the night I had written down something most important, but I was unable to decipher the scrawl. The next night, at three oclock, the idea returned. It was the design of an experiment to determine whether the hypothesis of chemical transmission that I had uttered seventeen years ago was correct. I got up immediately, went to the laboratory, and performed a simple experiment on a frog heart according to the nocturnal design. I have to describe this experiment briefly since its results became the foundation of the theory of chemical transmission of the nervous impulse. The hearts of two frogs were isolated, the first with its nerves, the second without. Both hearts were attached to Straub cannulas filled with a little Ringer solution. The vagus nerve of the first heart was stimulated for a few minutes. Then the Ringer solution that had been in the first heart during the stimulation of the vagus was transferred to the second heart. It slowed and its beats diminished just as if its vagus had been stimulated. Similarly, when the accelerator nerve was stimulated and the Ringer from this period transferred, the second heart speeded up and its beats increased. These results unequivocally proved that the nerves do not influence the heart directly but liberate from their terminals specific chemical substances which, in their turn, cause the well-known modifications of the function of the heart characteristic of the stimulation of its nerves.

The Truly Healthy environment is not merely safe but stimulating.

We should misjudge this scientist [Fritz Haber] seriously if we were to judge him only by his harvest. The stimulation of research and the advancement of younger scholars become ever more important to him than his own achievements.

When entering on new ground we must not be afraid to express even risky ideas so as to stimulate research in all directions. As Priestley put it, we must not remain inactive through false modesty based on fear of being mistaken.