A sick man talks obsessively about his illness; a healthy man never talks about his health; for as Pirandello points out, we take happiness for granted, and only begin to question life when we are unhappy.

I like people. I like animals, tooâ€”whales and quail, dinosaurs and dodos. But I like human beings especially, and I am unhappy that the pool of human germ plasm, which determines the nature of the human race, is deteriorating.
[Stating his alarm for the effect of radioactive fallout on human heredity. The article containing the quote was published three days after he was awarded the 1962 Nobel Peace Prize.] 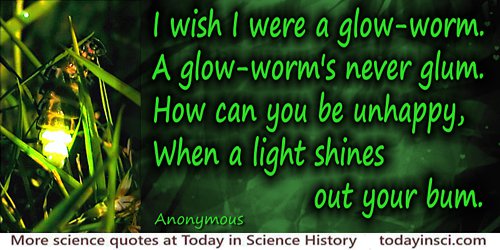 I wish I were a glow-worm.
A glow-wormâ€™s never glum.
How can you be unhappy,
When a light shines out your bum.

I would paint what has not been unhappily called the psychological character.

In spite of what moralists say, the, animals are scarcely less wicked or less unhappy than we are ourselves. The arrogance of the strong, the servility of the weak, low rapacity, ephemeral pleasure purchased by great effort, death preceded by long suffering, all belong to the animals as they do to men.

In the school of political projectors, I was but ill entertained, the professors appearing, in my judgment, wholly out of their senses; which is a scene that never fails to make me melancholy. These unhappy people were proposing schemes for persuading monarchs to choose favourites upon the score of their wisdom, capacity, and virtue; of teaching ministers to consult the public good; of rewarding merit, great abilities, and eminent services; of instructing princes to know their true interest, by placing it on the same foundation with that of their people; of choosing for employment persons qualified to exercise them; with many other wild impossible chimeras, that never entered before into the heart of man to conceive, and confirmed in me the old observation, that there is nothing so extravagant and irrational which some philosophers have not maintained for truth.

Men who are unhappy, like men who sleep badly, are always proud of the fact.

The story of a theoryâ€™s failure often strikes readers as sad and unsatisfying. Since science thrives on self-correction, we who practice this most challenging of human arts do not share such a feeling. We may be unhappy if a favored hypothesis loses or chagrined if theories that we proposed prove inadequate. But refutation almost always contains positive lessons that overwhelm disappointment, even when no new and comprehensive theory has yet filled the void.

To be creative, scientists need libraries and laboratories and the company of other scientists; certainly a quiet and untroubled life is a help. A scientist's work is in no way deepened or made more cogent by privation, anxiety, distress, or emotional harassment. To be sure, the private lives of scientists may be strangely and even comically mixed up, but not in ways that have any special bearing on the nature and quality of their work. If a scientist were to cut off an ear, no one would interpret such an action as evidence of an unhappy torment of creativity; nor will a scientist be excused any bizarrerie, however extravagant, on the grounds that he is a scientist, however brilliant.