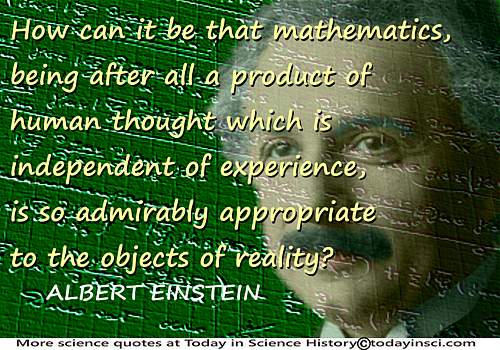 Here arises a puzzle that has disturbed scientists of all periods. How can it be that mathematics, being after all a product of human thought which is independent of experience, is so admirably appropriate to the objects of reality? Is human reason, then, without experience, merely by taking thought, able to fathom the properties of real things?

From 'Geometry and Experience', an expanded form of an Address by Albert Einstein to the Prussian Academy of Sciences in Berlin (27 Jan 1921). In Albert Einstein, translated by G. B. Jeffery and W. Perrett, Sidelights on Relativity (1923).

I took him [Lawrence Bragg] to a young zoologist working on pattern formation in insect cuticles. The zoologist explained how disturbances introduced into these regular patterns pointed to their formation being governed by some kind of gradient. Bragg listened attentively and then exclaimed: Your disturbed gradient behaves like a stream of sand running downhill and encountering an obstacle. Good heavens, replied the zoologist, I had been working on this problem for years before this simple analogy occurred to me and you think of it after twenty minutes.

I would by all means have men beware, lest Æsops pretty fable of the fly that sate [sic] on the pole of a chariot at the Olympic races and said, What a dust do I raise, be verified in them. For so it is that some small observation, and that disturbed sometimes by the instrument, sometimes by the eye, sometimes by the calculation, and which may be owing to some real change in the heaven, raises new heavens and new spheres and circles.

It is clear that the twentieth century is the most disturbed century within the memory of humanity. Any contemporary of ours who wants peace and comfort above all has chosen a bad time to be born.

In 'On the New Germany', Manchester Guardian (22 Mar 1933). Also seen paraphrased as, Anyone desiring a quiet life has done badly to be born in the twentieth century.

Life, therefore, has been often disturbed on this earth by terrible eventscalamities which, at their commencement, have perhaps moved and overturned to a great depth the entire outer crust of the globe, but which, since these first commotions, have uniformly acted at a less depth and less generally. Numberless living beings have been the victims of these catastrophes; some have been destroyed by sudden inundations, others have been laid dry in consequence of the bottom of the seas being instantaneously elevated. Their races even have become extinct, and have left no memorial of them except some small fragments which the naturalist can scarcely recognise.

Occurrences that other men would have noted only with the most casual interest became for Whitney exciting opportunities to experiment. Once he became disturbed by a scientist's seemingly endless pursuit of irrelevant details in the course of an experiment, and criticized this as being as pointless as grabbing beans out of a pot, recording the numbers, and then analyzing the results. Later that day, after he had gone home, his simile began to intrigue him, and he asked himself whether it would really be pointless to count beans gathered in such a random manner. Another man might well have dismissed this as an idle fancy, but to Whitney an opportunity to conduct an experiment was not to be overlooked. Accordingly, he set a pot of beans beside his bed, and for several days each night before retiring he would take as many beans as he could grasp in one hand and make a note of how many were in the handful. After several days had passed he was intrigued to find that the results were not as unrewarding as he had expected. He found that each handful contained more beans than the one before, indicating that with practice he was learning to grasp more and more beans. This might be called research in morphology, the science of animal structure, he mused. My hand was becoming webbed  so I said to myself: never label a real experiment useless, it may reveal something unthought of but worth knowing.

The body of the Earth, large, sluggish and inapt for motion, is not to be disturbed by movement (especially three movements), any more than the Aetherial Lights [stars] are to be shifted, so that such ideas are opposed both to physical principles and to the authority of the Holy Writ which many time: confirms the stability of the Earth (as we shall discuss more fully elsewhere).

The fertilized germ of one of the higher animals  is perhaps the most wonderful object in nature . On the doctrine of reversion [atavism]  the germ becomes a far more marvelous object, for, besides the visible changes which it undergoes, we must believe that it is crowded with invisible characters  separated by hundreds or even thousands of generations from the present time: and these characters, like those written on paper with invisible ink, lie ready to be evolved whenever the organization is disturbed by certain known or unknown conditions.

The history of life is more adequately represented by a picture of 'punctuated equilibria' than by the notion of phyletic gradualism. The history of evolution is not one of stately unfolding, but a story of homeostatic equilibria, disturbed only 'rarely' (i.e. rather often in the fullness of time) by rapid and episodic events of speciation.

The laboratory work was the province of Dr Searle, an explosive, bearded Nemesis who struck terror into my heart. If one made a blunder one was sent to stand in the corner like a naughty child. He had no patience with the women students. He said they disturbed the magnetic equipment, and more than once I heard him shout Go and take off your corsets! for most girls wore these garments then, and steel was beginning to replace whalebone as a stiffening agent. For all his eccentricities, he gave us excellent training in all types of precise measurement and in the correct handling of data.

In Cecilia Payne-Gaposchkin: An Autobiography and Other Recollections (1996), 116.

The vast spread
Of darkness
That speaks of mystery
The darkness that reveals
The beauty that lies beneath
In the form of glittering
Stars, a countless beauty
That seemed to conceal
A million stories
That can make the mankind
Take a new look at life
And the majestic moon
That silently looks at mankind
Wondering how its serenity
Was disturbed by the little steps
Of a man from the beautiful earth
Yet softly smiling back
And let the world sleep
In its magical glow
A glow that soothes
The worlds senses
And forget the pain of reality

There was yet another disadvantage attaching to the whole of Newtons physical inquiries, ... the want of an appropriate notation for expressing the conditions of a dynamical problem, and the general principles by which its solution must be obtained. By the labours of LaGrange, the motions of a disturbed planet are reduced with all their complication and variety to a purely mathematical question. It then ceases to be a physical problem; the disturbed and disturbing planet are alike vanished: the ideas of time and force are at an end; the very elements of the orbit have disappeared, or only exist as arbitrary characters in a mathematical formula

We sound the future, and learn that after a period, long compared with the divisions of time open to our investigation, the energies of our system will decay, the glory of the sun will be dimmed and the earth, tideless and inert, will no longer tolerate the race which has for a moment disturbed its solitude. Man will go down into the pit, and all his thoughts will perish.

The Foundations of Belief: Being Notes Introductory to the Study of Theology (1895), 30-1.

[1665-08-16] ...Hence to the Exchange, which I have not been a great while. But Lord, how sad a sight it is to see the streets empty of people, and very few upon the Change - jealous of every door that one sees shut up, lest it should be the plague - and about us, two shops in three, if not more, generally shut up. ... It was dark before I could get home; and so land at church-yard stairs, where to my great trouble I met a dead Corps, of the plague, in the narrow ally, just bringing down a little pair of stairs - but I thank God I was not much disturbed at it. However, I shall beware of being late abroad again.