[As Chief Scientific Adviser to the British Ministry of Defence] We persist in regarding ourselves as a Great Power, capable of everything and only temporarily handicapped by economic difficulties. We are not a great power and never will be again. We are a great nation, but if we continue to behave like a Great Power we shall soon cease to be a great nation. Let us take warning from the fate of the Great Powers of the past and not burst ourselves with pride (see Aesops fable of the frog). (1949)

And yet surely to alchemy this right is due, that it may be compared to the husbandman whereof Æsop makes the fable, that when he died he told his sons that he had left unto them gold buried under the ground in his vineyard: and they digged over the ground, gold they found none, but by reason of their stirring and digging the mould about the roots of their vines, they had a great vintage the year following: so assuredly the search and stir to make gold hath brought to light a great number of good and fruitful inventions and experiments, as well for the disclosing of nature as for the use of man's life.

Crowds are somewhat like the sphinx of ancient fable: It is necessary to arrive at a solution of the problems offered by their psychology or to resign ourselves to being devoured by them.

FAUSTUS: How many heavens or spheres are there?
MEPHASTOPHILIS: Nine: the seven planets, the firmament, and the empyreal heaven.
FAUSTUS: But is there not coelum igneum, et crystallinum?
MEPH.: No Faustus, they be but fables.
FAUSTUS: Resolve me then in this one question: Why are not conjunctions, oppositions, aspects, eclipses all at one time, but in some years we have more, in some less?
MEPH.: Per inaequalem motum respectu totius.
FAUSTUS: Well, I am answered. Now tell me who made the world.
MEPH.: I will not.
FAUSTUS: Sweet Mephastophilis, tell me.
MEPH.: Move me not, Faustus.
FAUSTUS: Villain, have I not bound thee to tell me any thing?
MEPH.: Ay, that is not against our kingdom.
This is. Thou are damn'd, think thou of hell.
FAUSTUS: Think, Faustus, upon God that made the world!
MEPH.: Remember this.

I had rather believe all the Fables in the Legend, and the Talmud, and the Alcoran, then that this universall Frame, is without a Minde. And therefore, God never wrought Miracle, to convince Atheisme, because his Ordinary Works Convince it. It is true, that a little Philosophy inclineth Mans Minde to Atheisme; But depth in Philosophy, bringeth Mens Mindes about to Religion.

I wanted certainty in the kind of way in which people want religious faith. I thought that certainty is more likely to be found in mathematics than elsewhere. But I discovered that many mathematical demonstrations, which my teachers expected me to accept, were full of fallacies, and that, if certainty were indeed discoverable in mathematics, it would be in a new field of mathematics, with more solid foundations than those that had hitherto been thought secure. But as the work proceeded, I was continually reminded of the fable about the elephant and the tortoise. Having constructed an elephant upon which the mathematical world could rest, I found the elephant tottering, and proceeded to construct a tortoise to keep the elephant from falling. But the tortoise was no more secure than the elephant, and after some twenty years of very arduous toil, I came to the conclusion that there was nothing more that I could do in the way of making mathematical knowledge indubitable.

I would by all means have men beware, lest Æsops pretty fable of the fly that sate [sic] on the pole of a chariot at the Olympic races and said, What a dust do I raise, be verified in them. For so it is that some small observation, and that disturbed sometimes by the instrument, sometimes by the eye, sometimes by the calculation, and which may be owing to some real change in the heaven, raises new heavens and new spheres and circles.

If you were to make little fishes talk, they would talk like whales.

Commenting how the animals in fables should talk in character. As quoted in James Boswell, The Life of Johnson (1785), 229.

Science has blown to atoms, as she can rend and rive in the rocks themselves; but in those rocks she has found, and read aloud, the great stone book which is the history of the earth, even when darkness sat upon the face of the deep. Along their craggy sides she has traced the footprints of birds and beasts, whose shapes were never seen by man. From within them she has brought the bones, and pieced together the skeletons, of monsters that would have crushed the noted dragons of the fables at a blow.

Book review of Robert Hunt, Poetry of Science (1848), in the London Examiner (1848). Although uncredited in print, biographers identified his authorship from his original handwritten work. Collected in Charles Dickens and Frederic George Kitton (ed.) Old Lamps for New Ones: And Other Sketches and Essays (1897), 87.

So-called extraordinary events always split into two extremes naturalists who have not witnessed them: those who believe blindly and those who do not believe at all. The latter have always in mind the story of the golden goose; if the facts lie slightly beyond the limits of their knowledge, they relegate them immediately to fables. The former have a secret taste for marvels because they seem to expand Nature; they use their imagination with pleasure to find explanations. To remain doubtful is given to naturalists who keep a middle path between the two extremes. They calmly examine facts; they refer to logic for help; they discuss probabilities; they do not scoff at anything, not even errors, because they serve at least the history of the human mind; finally, they report rather than judge; they rarely decide unless they have good evidence.

The ancients had a taste, let us say rather a passion, for the marvellous, which caused  grouping together the lofty deeds of a great number of heroes, whose names they have not even deigned to preserve, and investing the single personage of Hercules with them.  In our own time the public delight in blending fable with history. In every career of life, in the pursuit of science especially, they enjoy a pleasure in creating Herculeses.

In François Arago, trans. by William Henry Smyth, Baden Powell and Robert Grant, 'Fourier', Biographies of Distinguished Scientific Men (1859), Vol. 1, 408. This comment indicates that a single scientist or inventor may be held as the exemplar, such as James Watt and the steam-engine, although groundwork was laid by predecessors. 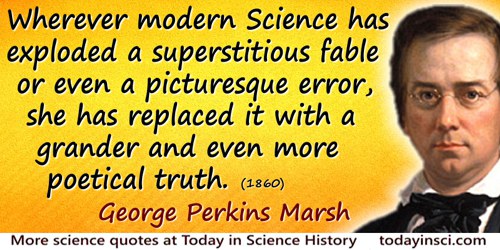 Wherever modern Science has exploded a superstitious fable or even a picturesque error, she has replaced it with a grander and even more poetical truth.