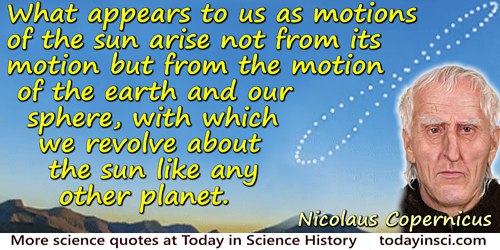 After I had addressed myself to this very difficult and almost insoluble problem, the suggestion at length came to me how it could be solved with fewer and much simpler constructions than were formerly used, if some assumptions (which are called axioms) were granted me. They follow in this order.
There is no one center of all the celestial circles or spheres.
The center of the earth is not the center of the universe, but only of gravity and of the lunar sphere.
All the spheres revolve about the sun as their mid-point, and therefore the sun is the center of the universe.
The ratio of the earth's distance from the sun to the height of the firmament is so much smaller than the ratio of the earth's radius to its distance from the sun that the distance from the earth to the sun is imperceptible in comparison with the height of the firmament.
Whatever motion appears in the firmament arises not from any motion of the firmament, but from the earth's motion. The earth together with its circumjacent elements performs a complete rotation on its fixed poles in a daily motion, while the firmament and highest heaven abide unchanged.
What appears to us as motions of the sun arise not from its motion but from the motion of the earth and our sphere, with which we revolve about the sun like any other planet. The earth has, then, more than one motion.
The apparent retrograde and direct motion of the planets arises not from their motion but from the earth's. The motion of the earth alone, therefore, suffices to explain so many apparent inequalities in the heavens.

And new philosophy calls all in doubt,
The Element of fire is quite put out;
The Sun is lost, and thearth, and no mans wit
Can well direct him where to look for it.
And freely men confesse that this worlds spent,
When in the Planets, and the Firmament
They seeke so many new; and then see that this
Is crumbled out againe to his Atomies.
Tis all in pieces, all cohaerence gone;
All just supply, and all Relation;
Prince, Subject, Father, Sonne, are things forgot,
For every man alone thinkes he hath got
To be a phoenix, and that then can bee
None of that kinde, of which he is, but hee.

FAUSTUS: How many heavens or spheres are there?
MEPHASTOPHILIS: Nine: the seven planets, the firmament, and the empyreal heaven.
FAUSTUS: But is there not coelum igneum, et crystallinum?
MEPH.: No Faustus, they be but fables.
FAUSTUS: Resolve me then in this one question: Why are not conjunctions, oppositions, aspects, eclipses all at one time, but in some years we have more, in some less?
MEPH.: Per inaequalem motum respectu totius.
FAUSTUS: Well, I am answered. Now tell me who made the world.
MEPH.: I will not.
FAUSTUS: Sweet Mephastophilis, tell me.
MEPH.: Move me not, Faustus.
FAUSTUS: Villain, have I not bound thee to tell me any thing?
MEPH.: Ay, that is not against our kingdom.
This is. Thou are damn'd, think thou of hell.
FAUSTUS: Think, Faustus, upon God that made the world!
MEPH.: Remember this.

How hard to realize that every camp of men or beast has this glorious starry firmament for a roof! In such places standing alone on the mountain-top it is easy to realize that whatever special nests we make - leaves and moss like the marmots and birds, or tents or piled stone - we all dwell in a house of one room - the world with the firmament for its roof - and are sailing the celestial spaces without leaving any track.

I conclude therefore that this star [Tychos supernova] is not some kind of comet or a fiery meteor, whether these be generated beneath the Moon or above the Moon, but that it is a star shining in the firmament itselfone that has never previously been seen before our time, in any age since the beginning of the world.

If one might wish for impossibilities, I might then wish that my children might be well versed in physical science, but in due subordination to the fulness and freshness of their knowledge on moral subjects. ... Rather than have it the principal thing in my son's mind, I would gladly have him think that the sun went round the earth, and that the stars were so many spangles set in the bright blue firmament.

In the firmament of science Mayer and Joule constitute a double star, the light of each being in a certain sense complementary to that of the other.

Minorities are the stars of the firmament; majorities, the darkness in which they float.

People give ear to an upstart astrologer [Copernicus] who strove to show that the earth revolves, not the heavens or the firmament, the sun and the moon. Whoever wishes to appear clever must devise some new system, which of all systems is of course the very best. This fool wishes to reverse the entire science of astronomy. 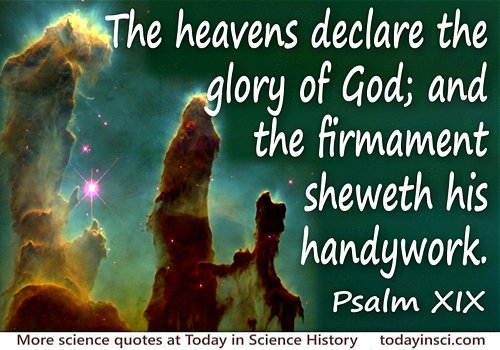 The heavens declare the glory of God; and the firmament sheweth his handy work.  In them hath he set a tabernacle for the sun, which is as a bridegroom coming out of his chamber, and rejoiceth as a strong man to run a race. His going forth is from the end of the heaven, and his circuit unto the ends of it: and there is nothing his from the heat thereof.

The Spacious Firmament on high,
With all the blue Etherial Sky,
And spangled Heavns, a Shining Frame, Their great Original proclaim:
Thunwearied Sun, from day to day
Does his Creators Powr display,
And publishes to every Land
The Work of an Almighty Hand.
Soon as the Evening Shades prevail,
The Moon takes up the wondrous Tale,
And nightly to the listning Earth Repeats the Story of her Birth:
Whilst all the Stars that round her burn,
And all the Planets, in their turn,
Confirm the Tidings as they rowl,
And spread the Truth from Pole to Pole.
What though, in solemn Silence, all
Move round the dark terrestrial Ball?
What tho nor real Voice nor Sound
Amid their radiant Orbs be found?
In Reasons Ear they all rejoice,
And utter forth a glorious Voice,
For ever singing, as they shine,
The Hand that made us is Divine.

These days at ten oclock at night a most alarming wonder has manifested itself in the skies. The firmament was rent asunder and through this gap one could distinguish chariots and armies, riders with yellow, white, red and black standards, though to do battle against each other. This awesome and unusual vision continued from ten at night till about two of the morning, and was witnessed with alarm and dismay by many honest and trustworthy people. The significance thereof is known but to God Almighty, Who may graciously prevent the shedding of innocent blood.

'Frightful Apparition in the Sky at Vienna. From Vienna, the 11th day of August 1590'. As quoted in George Tennyson Matthews (ed.) News and Rumor in Renaissance Europe: The Fugger Newsletters (1959), 188. A handwritten collection of news reports (1568-1604) by the powerful banking and merchant house of Fugger in Ausburg.

This is the excellent foppery of the world: that when we are sick in fortune—often the surfeits of our own behaviour—we make guilty of our disasters the sun, the moon, and stars, as if we were villains on necessity, fools by heavenly compulsion, knaves, thieves, and treachers by spherical predominance, drunkards, liars, and adulterers, by an enforced obedience of planetary influence, and all that we are evil in, by a divine thrusting on. An admirable evasion of whoremaster man, to lay his goatish disposition on the charge of a star! My father compounded with my mother under the Dragon's tail and my nativity was under Ursa Major, so that it follows that I am rough and lecherous. Fut! I should have been that I am had the maidenliest star in the firmament twinkled on my bastardizing.

To set foot on the soil of the asteroids, to lift by hand a rock from the Moon, to observe Mars from a distance of several tens of kilometers, to land on its satellite or even on its surface, what can be more fantastic? From the moment of using rocket devices a new great era will begin in astronomy: the epoch of the more intensive study of the firmament.

We find it hard to picture to ourselves the state of mind of a man of older days who firmly believed that the Earth was the centre of the Universe, and that all the heavenly bodies revolved around it. He could feel beneath his feet the writhings of the damned amid the flames; very likely he had seen with his own eyes and smelt with his own nostrils the sulphurous fumes of Hell escaping from some fissure in the rocks. Looking upwards, he beheld ... the incorruptible firmament, wherein the stars hung like so many lamps.

The Garden of Epicurus (1894) translated by Alfred Allinson, in The Works of Anatole France in an English Translation (1920), 11.

Who vagrant transitory comets sees,
Wonders because theyre rare; but a new star
Whose motion with the firmament agrees,
Is miracle; for there no new things are.