Bible
“The heavens declare the glory of God” 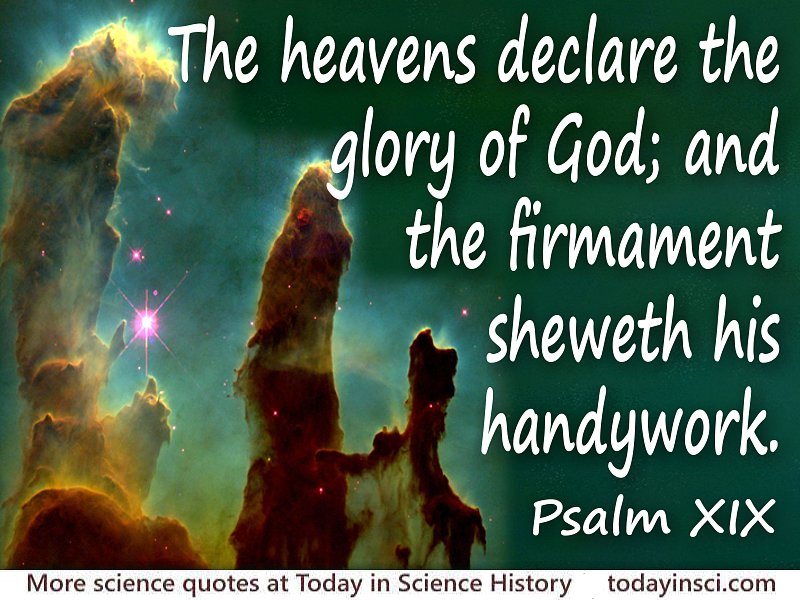 “The heavens declare the glory of God; and the firmament sheweth his handywork.”
— Bible
Psalm 19:1

This quote is the first line from Psalm 19, on a background that is the famous Hubble Space Telescope image known as “The Pillars of Creation,” taken in 1995. The giant pillars are in fact light years in length, made of hydrogen and dust. These are stellar nurseries, in which new stars are being formed.

The quote above is in the words of the translation made for the King James Bible published in 1611.

Some alternative translations include:

The heavens are sounding the glory of God; the arch of the sky makes clear the work of his hands. —Bible in Basic English

The heavens declare the glory of God, the dome of the sky speaks the work of his hands. —Complete Jewish Bible

The heavens declare the glory of God, and the sky above proclaims his handiwork. —English Standard Version

The heavens tell the glory of God, and the skies announce what his hands have made. —New Century Version

The heavens tell of the glory of God. The skies display his marvelous craftsmanship. —New Living Translation

The heavens declare the glory of God. The expanse shows his handiwork. —World English Bible