I cannot serve as an example for younger scientists to follow. What I teach cannot be learned. I have never been a 100 percent scientist. My reading has always been shamefully nonprofessional. I do not own an attaché case, and therefore cannot carry it home at night, full of journals and papers to read. I like long vacations, and a catalogue of my activities in general would be a scandal in the ears of the apostles of cost-effectiveness. I do not play the recorder, nor do I like to attend NATO workshops on a Greek island or a Sicilian mountain top; this shows that I am not even a molecular biologist. In fact, the list of what I have not got makes up the American Dream. Readers, if any, will conclude rightly that the Gradus ad Parnassum will have to be learned at somebody elses feet.

Part of a longer quote that begins, You disembowel the animal on the Jean-Henri Fabre Quotes page of this website.

I well know what a spendidly great difference there is [between] a man and a bestia when I look at them from a point of view of morality. Man is the animal which the Creator has seen fit to honor with such a magnificent mind and has condescended to adopt as his favorite and for which he has prepared a nobler life; indeed, sent out for its salvation his only son; but all this belongs to another forum; it behooves me like a cobbler to stick to my last, in my own workshop, and as a naturalist to consider man and his body, for I know scarcely one feature by which man can be distinguished from apes, if it be not that all the apes have a gap between their fangs and their other teeth, which will be shown by the results of further investigation.

In the mountains of Parma and Piacenza, multitudes of shells and corals filled with worm-holes may be seen still adhering to the rocks, and when I was making the great horse at Milan a large sack of those which had been found in these parts was brought to my workshop by some peasants... The red stone of the mountains of Verona is found with shells all intermingled, which have become part of this stone... And if you should say that these shells have been and still constantly are being created in such places as these by the nature of the locality or by potency of the heavens in these spots, such an opinion cannot exist in brains possessed of any extensive powers of reasoning because the years of their growth are numbered upon the outer coverings of their shells; and both small and large ones may be seen; and these would not have grown without feeding, or fed without movement, and here [embedded in rock] they would not have been able to move... The peaks of the Apennines once stood up in a sea, in the form of islands surrounded by salt water... and above the plains of Italy where flocks of birds are flying today, fishes were once moving in large shoals.

Man is but a perambulating tool-box and workshop or office, fashioned for itself by a piece of very clever slime, as the result of long experience. ... Hence we speak of man's body as his “trunk.”

Natural powers, principally those of steam and falling water, are subsidized and taken into human employment Spinning-machines, power-looms, and all the mechanical devices, acting, among other operatives, in the factories and work-shops, are but so many laborers. They are usually denominated labor-saving machines, but it would be more just to call them labor-doing machines. They are made to be active agents; to have motion, and to produce effect; and though without intelligence, they are guided by laws of science, which are exact and perfect, and they produce results, therefore, in general, more accurate than the human hand is capable of producing.

Nature!  She is always building up and destroying; but her workshop is inaccessible.

Not only in antiquity but in our own times also laws have been passed...to secure good conditions for workers; so it is right that the art of medicine should contribute its portion for the benefit and relief of those for whom the law has shown such foresight...[We] ought to show peculiar zeal...in taking precautions for their safety. I for one have done all that lay in my power, and have not thought it beneath me to step into workshops of the meaner sort now and again and study the obscure operations of mechanical arts.

The development of statistics are causing history to be rewritten. Till recently the historian studied nations in the aggregate, and gave us only the story of princes, dynasties, sieges, and battles. Of the people themselves—the great social body with life, growth, sources, elements, and laws of its own—he told us nothing. Now statistical inquiry leads him into the hovels, homes, workshops, mines, fields, prisons, hospitals, and all places where human nature displays its weakness and strength. In these explorations he discovers the seeds of national growth and decay, and thus becomes the prophet of his generation.

Speech (16 Dec 1867) given while a member of the U.S. House of Representatives, introducing resolution for the appointment of a committee to examine the necessities for legislation upon the subject of the ninth census to be taken the following year. Quoted in John Clark Ridpath, The Life and Work of James A. Garfield (1881), 217.

You disembowel the animal and I study it alive; you make it an object of horror and pity, and I make it love you; you work in a torture and dismemberment workshop, I observe under the blue sky, on the cicadas song;  you scrutinize death, I scrutinize life. 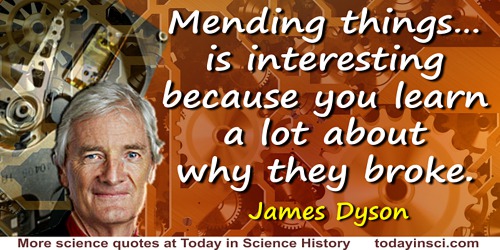 [In my home workshop,] generally Im mending things, which is interesting because you learn a lot about why they broke.

[The screw machine] was on the principle of the guage or sliding lathe now in every workshop throughout the world; the perfection of which consists in that most faithful agent gravity, making the joint, and that almighty perfect number three, which is in harmony itself. I was young when I learned that principle. I had never seen my grandmother putting a chip under a three-legged milking-stool; but she always had to put a chip under a four-legged table, to keep it steady. I cut screws of all dimensions by this machine, and did them perfectly. (1846)